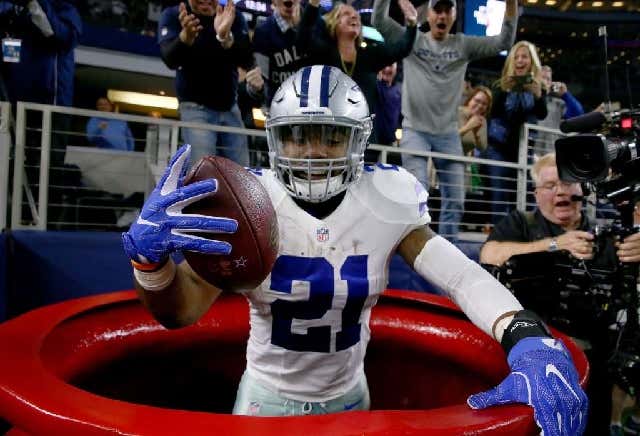 Yahoo – The woman who accused Dallas Cowboys star Ezekiel Elliott of domestic violence admitted to NFL investigators having a text exchange in which she discussed leveraging sex videos featuring her and Elliott for money from the player, according to documents obtained by Yahoo Sports.

The exchange is contained in the 160-page report prepared by NFL investigators into allegations that Elliott committed multiple acts of violence against ex-girlfriend Tiffany Thompson. Within that report, investigators noted a September 2016 text message exchange between Thompson and a friend, in which Thompson raised the idea of selling sex videos of herself and Elliott. …

[Thompson]: What if I sold mine and Ezekiel’s sex videos
[Friend]: We’d all be millionaires
[Friend]: We could black mail him w that
[Thompson]: I want to bro
[Friend]: Let’s do it
[Thompson]: Scared
[Friend]: Shit
[Friend]: Id be like look give me 10k or I’ll just sell our sex videos for the same amount flat
[Friend]: Me and my friends tryna go on vacation and get boob jobs
(the report notes a pair of blank texts)
[Thompson]: 10k Bitch I want 20k
[Thompson]: Go big or go home

This doesn’t exonerate Ezekiel Elliot. And it’s not about victimizing his alleged victim. Just because Tiffany Thompson texted with a girlfriend about blackmailing him with sex tapes doesn’t mean that he didn’t turn Mr. Hand into Mr. Fist last year or that by any stretch of the imagination he’d be justified if he had.

This remains one of those he said/she said situations that every court in the country has to sort out every Monday-through-Friday. And it’s a nightmare to try to figure out beyond a reasonable doubt what happened between two people alone in a room together. So this information is not an indictment of either party.

What it is, is an indictment of the NFL. Without a doubt. This is just more proof that High Sparrow  Goodell and the Septons he’s got running his little Faith of the Seven have never seen an investigation they cannot fuck up.

Keep in mind, the league refused to release this report. Clearly it was leaked to Yahoo by one of Elliot’s attorneys because it’s such a colossal win for his client. I mentioned the courts, earlier. This is the kind of information that impeach witnesses and produce Not Guilty verdicts all day long. But Goodell didn’t want any of us to know about it. For all the speeches he’s given loaded with talking points about “transparency,” “facts” and “getting to the truth,” Tiffany Thompson’s blackmail and her girlfriend’s boob job are a little more truth than we can handle.

And just because all roads lead to Foxboro, riddle me why all of a sudden text messages aren’t super important. The Ginger Hammer ejaculated in his pants over one May 2014 text between the Deflator and Dorito Dink. And couldn’t wait to hustle Stephen A. Smith before the cameras to tell the world Tom Brady “destroyed” his phone. And Goodell didn’t want Brady’s appeal transcript to be released, either. That was put out there by Brady’s side. But a piece of actual text evidence that would get Elliot’s case thrown out of court? No transparency for you. Not when it hurts the Commissar’s PR campaign to pass himself off as the Champion of Women and sell him some pink merchandise in October.

We’ll never know for sure whether Elliot is a woman abuser. But we know for a fact anyone who takes Goodell’s side in these matters is a goddamned moron.