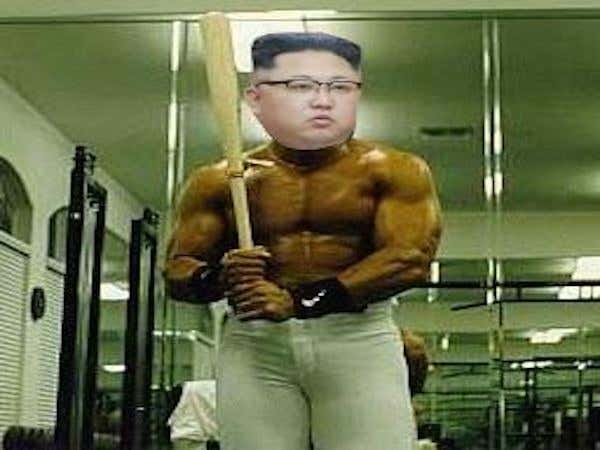 Page Six- Nuke-happy North Korean tyrant Kim Jong Un might be the way he is because he suffers from ’roid rage, doctors say. There’s widespread speculation “in the medical community that he has gout, and one of the treatments for gout is steroids,” Dr. Rock Positano of the Hospital for Special Surgery told me. “This fellow could be manifesting ’roid rage.”

I stumbled upon this story last night and it hit my brain like a ton of bricks. You know when Michael Corleone gets hit by the Apollonia thunderbolt in Sicily? That was me with this story. The thought of that little pudgy fuck throwing some shitty North Korean version of the cream and the clear into his body will make me laugh every single time. Not just a chuckle either. But a good, solid fat person belly laugh. Obviously lots of stuff on the news has been a mix of scary and shitty lately. But any time I want to go to my Happy Place, I just envision this pocket sized madman launching dingers to Guam in front of 10 generals as they are forced to clap for him as he screams BEEFCAKE like a North Korean Eric Cartman.

To think that World War III may break out because some fuckhead with nukes has roid rage because of a bad case of the gout is terrifying. But if you don’t laugh at shit like this you may cry. And I was told my whole life that crying is for pussies (unless you are Uncle Chaps or Sterling Shepard).

Now if Kim Jong has a cousin named Yuri that is supplying the roids, he better not snitch. Because Kimmy Jo Jo don’t fuck around by pissing on floors. He will cut you to bits with a fucking anti-aircraft machine gun. However, as Buster Olney has likely touched on countless times in his Diamond Notes column, Kim Jong’s chances of making the Baseball Hall of Fame were already pretty slim before this story dropped because he’s never played professional baseball and he’s a fat pussy toad. But I think this expose’ was the nail in the coffin of any chances of Kim Jong being immortalized with the legends of Cooperstown.