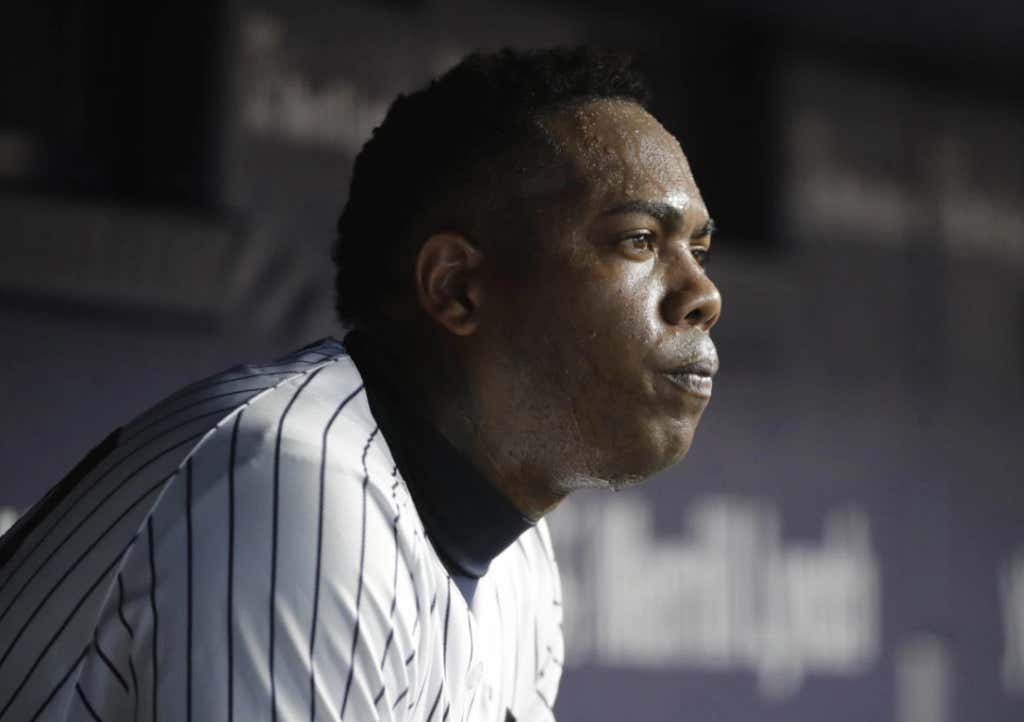 First off, thank you to all the stoolies that came out last night to Barstool At The Ballpark. It was honestly incredible the turnout we had. We basically have the Yankees begging us to do it again.

Okay now to the game, that sucked in every way shape or form. It was the definition of a gut punch to lose that way and a microcosm of how this second half has gone. Jordan Montgomery pitched his ass off for the Yankees. After getting struck by a foul ball just the day before, he came out and threw 5 and a third of two hit baseball, surrendering just one run. The kid was getting a lot of heat about being tired and the innings limit catching up to him, but all he’s done since is twirl back to back gems against the Indians and Red Sox (two for sure playoff teams). It looks like he’s going to be limited to around 5 innings or so for the time being as they try to avoid piling on his workload this year, so that’s the best we’re going to get from Monty here on out.

As expected, Chris Sale was nearly unhittable all night long.

He struck out 12 batters in all, just overpowering every single hitter with his CY Young stuff. The entire time he was on the mound I was just praying that his pitch count would jump up, but for the most part it didn’t. His night was nearly perfect except for a two batter sequence in the 5th when Headley singled, and Austin Romine stepped to the plate. Of all people to get the best knock off Sale it was AUSTIN ROMINE.

Partly a good piece of hitting to get it to the wall and partly just a horrible misplay by Mookie Betts in right field. Whatever it was, I was ecstatic cause we scored a run off of Chris Sale, one of the hardest things to do in baseball these days.

Eventually Sale’s pitch count rose to the point where Farrell had to pull him and it happened before the ninth inning. You know what that meant? Someone not named Chris Sale or Craig Kimbrel would be coming into the game to pitch. Sign me up whenever that’s the case when facing the Red Sox. Last night that meant Matt Barnes, who appears to give up a run almost every time he faces the Yankees. Barnes threw 21 pitches and only managed to get 8 strikes across the plate. Todd Frazier stepped to the dish with the bases loaded and one out, just needing to get the ball to the outfield to get the job done. He did just that.

An aspect of this Yankees offense that has murdered them lately has been leaving runners on base when in scoring position. Countless times the last two months there have been lead off doubles that get stranded so badly the runner doesn’t leave second base. Frazier was in a big spot last night, did exactly what was asked of him, and drove in the go-ahead run. The stadium was rocking and it was time to hand the ball over to Chapman and win the series. After fanning Hanley on three 100+mph fastballs, Chappy got ahead of Devers on a few 102 mph fastballs. The stadium rose to their collective feet in maybe the loudest they’ve been all season long. You could feel hope from this team and the fans that we could actually beat these motherfuckers. And then 20 year old Rafael Devers turned on a 102.8 mph fastball at his eye level and hit it out of the park.

It was soul-crushing. I felt a piece of me die inside when I heard the crack of the bat. Just an absolute missile to left center from a 20 year old kid who isn’t old enough to drink yet. Think about that. The Yankees and Red Sox are locked in a heated battle, with the game on the line and a 20 year old phenom changed the series and maybe even the season on one swing. What were you doing when you were 20? I was a junior in college, getting drunk almost every night, sleeping in til noon with not a care in the world about anything. What’s Rafael Devers doing? Hitting 102 mph fastballs out of the park in the 9th inning of a Yankees-Red Sox game in August. Shit is just ridiculous. Chapman’s numbers against the Sox this year are staggering. Like actually what the fuck are we paying this guy $90 million for if in year one we’re getting this shit. I don’t care if he makes the most money out of the pen (BY FAR) he’s not getting the job done. It’s time we consider changing his role, at least for the time being.

The game went onto the 10th when Benintendi drove in the winning run on a single to right. Craig Kimbrel shut the door on Hicks-Judge-Sanchez and there went the series. One moment you’re cruising in the 9th with Chapman throwing absolute cheddar, and the next you’re helpless against Craig Kimbrel, letting the series slip away in horrifying fashion.

I think it’s safe to say the division is not going to happen this year. At least it shouldn’t be the target right now. If you can’t close out games like that, you don’t deserve it. Now 5.5 games back from the Sox with a month and a half to play, the Yankees goal for now needs to be putting some distance between the Angels, Twins, Royals, Rays, Mariners, and Orioles. If the Sox slip up and the Yanks catch fire then sure, you never know, but we have to be realistic right now.

A big four game home and home set with the Mets starts tonight and the Yanks need to take at minimum three of four. Tonight is a puke-worthy matchup with Luis Cessa facing Rafael Montero. If you bought a ticket tonight, I’m sorry. Just bet the over and hope for a billion runs. Luis Cessa is capable of going four innings giving up two runs, especially to that Mets lineup, but Rafael Montero is a flat out HORRIBLE pitcher. If the Yanks don’t come out and rock the fuck out of him I’m going to be concerned. Tomorrow, on the other hand, is a must watch game with Sonny Gray making his home debut against Jacob deGrom. I cannot fucking wait for that game.

Once again thank you to all the stoolies who came out yesterday, I’ll do my best to get that cookin’ again before the season ends. A few of you guys even wanted pictures with me and Frankie Borelli. We were of course happy to oblige.