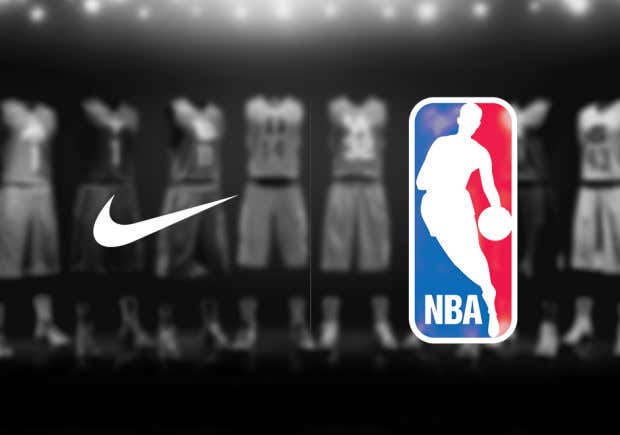 When the news first broke that the NBA was moving away from Adidas and moving to Nike, as an NBA fan I didn’t know what to think. How different could they be? Would Nike come in and turn every NBA franchise into Oregon? In the leading weeks until teams started to unveil their new digs, potential concepts flew around Twitter nonstop, and quite frankly it made me nervous as I hated almost every one I saw.

But now, teams are starting to release the actual designs, and the results are mixed. Some are better than others, some are fire, and some are hot trash. Below is a list of each team’s new uniform that has officially made their announcement.

Not a huge difference from last year, some slight tweaks here and there but things stayed relatively the same. The big addition, one that I LOVE, is the addition Jordan logo. Sure pays to be the owner, but I like how this differentiates the Hornets from everyone else who will have the Nike swoosh. despite being pretty “meh”, in my opinion they should have gone back to the glory days of these bad boys 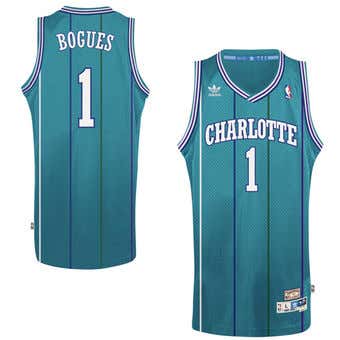 One fear I had with these new jerseys was what it was going to do to the iconic NBA teams. Seeing the Bulls stay true to who they are was a sigh of relief. The one thing that’s weird though is they are now going to wear red at home. I know the plan is to do away with home/away colors this year, but that just feels weird to me.

Gross. To be fair, I don’t really care for the current Cavs uniform either so I’m not sure what Nike could have done to sway me. I would say since Lebron got to CLE, they haven’t had a good looking jersey and things are getting no better in 2017. To me, these look more like something a college would wear, and I get they are trying to pay tribute with these, but they stink. The Cavs are another one of those teams that have pretty legit throwbacks, and probably should have gone back to that.

Also, VERYYYYY interesting this did not have a 23 OR a 2 as the jersey number. Just trying to connect the dots is all.

The Nuggets have one of the more dramatic transformations, making the baby blue more of an accent color than what we’ve seen for some time now. To be honest, these are pretty underwhelming as well. I say that because the Nuggets without a doubt have a Top 5 jersey in their history, and it’s a damn shame we’ll probably never get anything close to this from them again 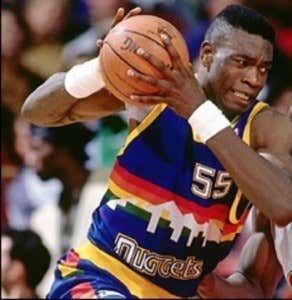 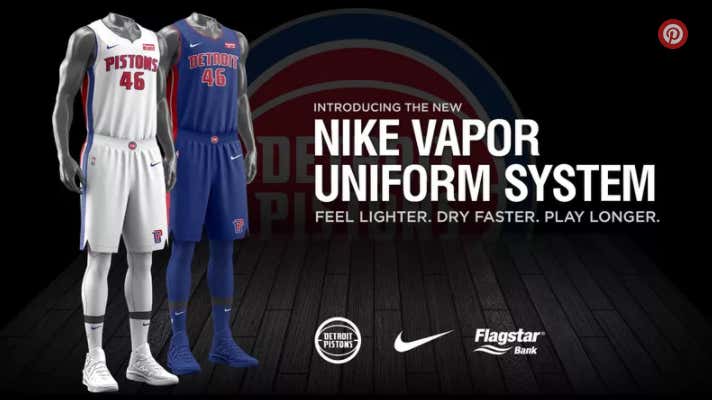 Another sigh of relief for one of the NBA’s more historic franchises. I like the subtle change of the stripes on the sides, and the updated logos on the shorts, but other than that, nothing really changed here. Much like CHA/CHI this is more “meh” than anything else. 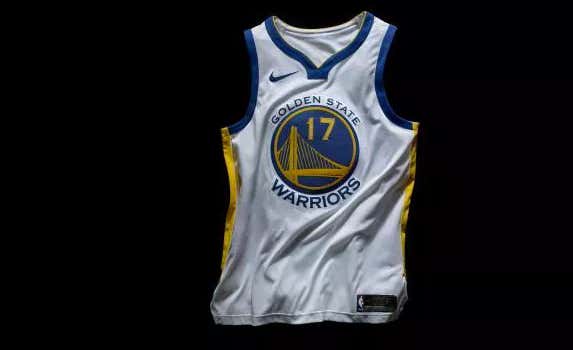 As much as it pains me to suck the dick of this Super Team, I’ve always loved the Warriors uniforms, from their throwback The City ones, to what we saw in the mid 2000s. Once GS made their switch in 2011 to what we see today, I’d argue they’ve had one of the best jerseys in the entire league. No surprise very little has changed with these new Nike ones and I wouldn’t say that’s a bad thing either. If it’s not broke don’t fix it.

It is interesting though with all that money they are going to be paying in luxury taxes, that GS doesn’t have a jersey sponsor.

As you can see, there’s certainly a trend of teams not making huge changes, and Houston fits into that. The one thing it does look like though, is that the Rockets are making the shoulder cut even smaller this year. For me, this is a good idea. I can’t stand those super boxy looking jerseys. They started to address this last year, but these look even better. The biggest difference is they cleaned up the pattern on the side and now have that solid red around the arm which I think works well. Whoever ends up buying the Rockets can at least know they won’t look like complete shmucks.

Tough times right now in the Hoosier state. First they lose to Lebron in the playoffs…again. Then, their GM decides to be a complete and utter moron that refused to wait 48 hours, and traded their franchise player for what I would call 70 cents on the dollar. And like with any breakup, they decided it was time for a makeover. Nothing makes you forget about your ex quicker than becoming a completely different person. It started with their new court design

which isn’t great. I do like the center court logo change, but the dark border change almost makes things too dark. Add in the state shapes on either end, and it just looks silly. Again, too much dark blue on this court for my liking. Sometimes less is more Indiana.

Then came those new jerseys above. I guess the idea was to make these a true tribute to the state of Indiana, which is why they changed their official logo. When you look close you see these lines, which apparently are to symbolize the rising son of the dimensional farmland system. They are supposed to convey a sense of home and are a physical representation of growth.

Well guess what Indiana, they stink.

Bravo! Bravo! This is what I’m talking about. These Clippers jerseys are 1000x better than that gross logo jersey we got last year. I like the color treatment better around the neck, I like how they simplified the text, and I think the stripes work much better than the color strips they had down the sides in previous versions. Who cares if their franchise may be in a bit of chaos at the moment, at least they’ll look fresh while dropping in the West.

Another team not really moving away from what we saw last year, so there’s not really much to say. The one thing I haven’t seen is if Nike will also produce the alternate jersey that has the deer on it. This one 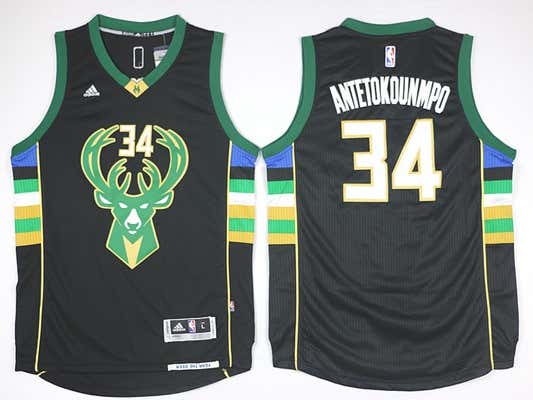 for some reason I really like this one so I hope it does not have the same fate as Bambi but I’m not optimistic.

Aside from maybe Indiana, the Timberwolves in my opinion had one of the biggest changes, and I’m not sure what to think. After getting over the initial shock,  the white ones aren’t sooo bad. Minnesota has been slowly updating their look, it started with the logo update back in April

For a campaign that was all about the #NewLook and #NewEra, things didn’t really feel so new considering this is where they were coming from.

But these jerseys are a much different story. It feels to me more like a track suit than a basketball uniform. My mind also went to those Atlanta Hawks throwbacks that have the line go across the top of the city. To be honest, there isn’t enough green for my liking. I would have liked to see them throw a classic green tree somewhere on there. Right in the middle of the waist strap would have been perfect.

The all dark blue I’m less crazy about. I will say this though, unlike some other teams, the Timberwolves didn’t get boned by their corporate logo being a complete eye sore.

Damn, now maybe Anthony Davis won’t leave. This is the type of jersey update I can get behind. Subtle, but effective. The new font for New Orleans looks much better, like the bigger letters and tighter spacing, compared to this 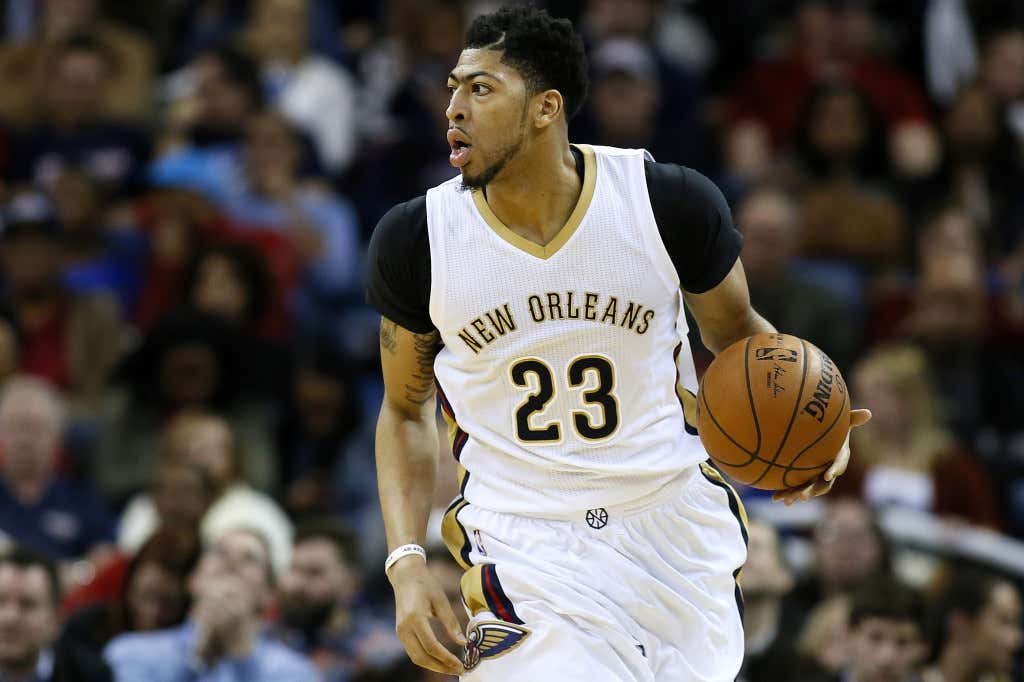 Hopefully they get to keep their red alternate because that would look great in this design as well. Everybody knows the saying look good play good, so watch out Pelicans are about to win close to 40. 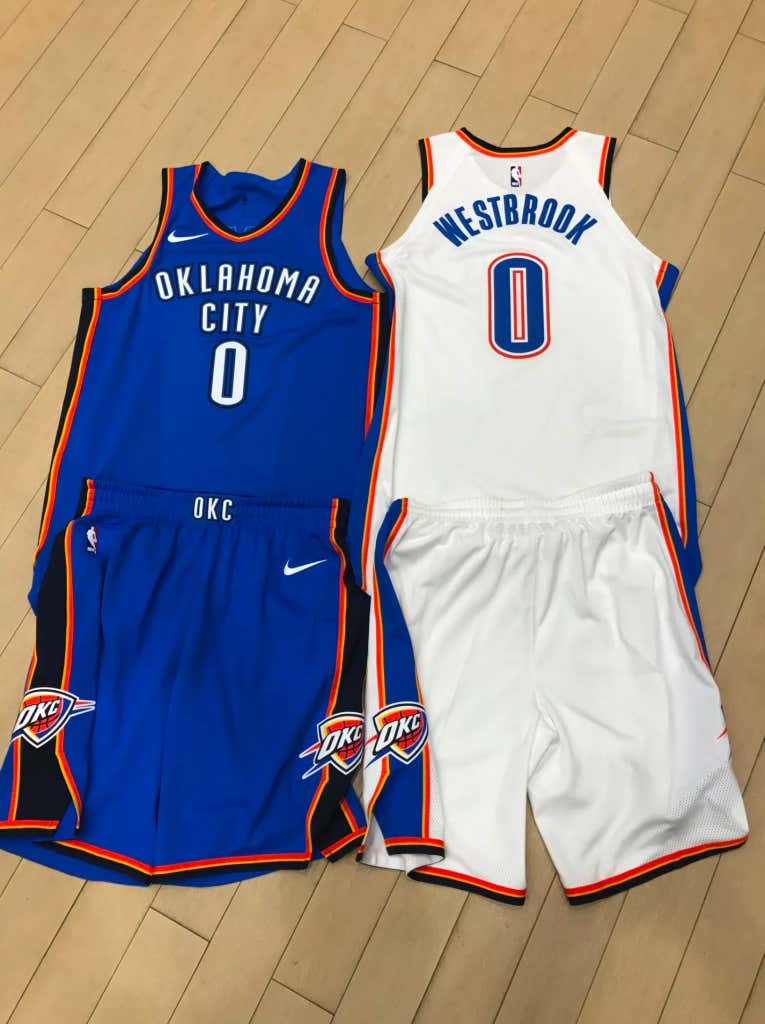 Other than a little bit darker of a color, and the addition of OKC on the shorts, nothing really changed which surprised me. Before this reveal it wouldn’t have shocked me if Nike hooked up their guy Westbrook in something new. But then you remember it’s OKC. Their logo essentially hasn’t changed since they because a franchise. Their jerseys had a very slight tweak in 2010, and they haven’t changed since. Meh.

Jordie already gave his thoughts from a Philly perspective, you can find that here.

My love for the throwback Phoenix Suns jersey is no secret. I have to say, while nowhere NEAR that level, the 2017 Suns jersey might get my vote for best overall upgrade. To to go that, from this 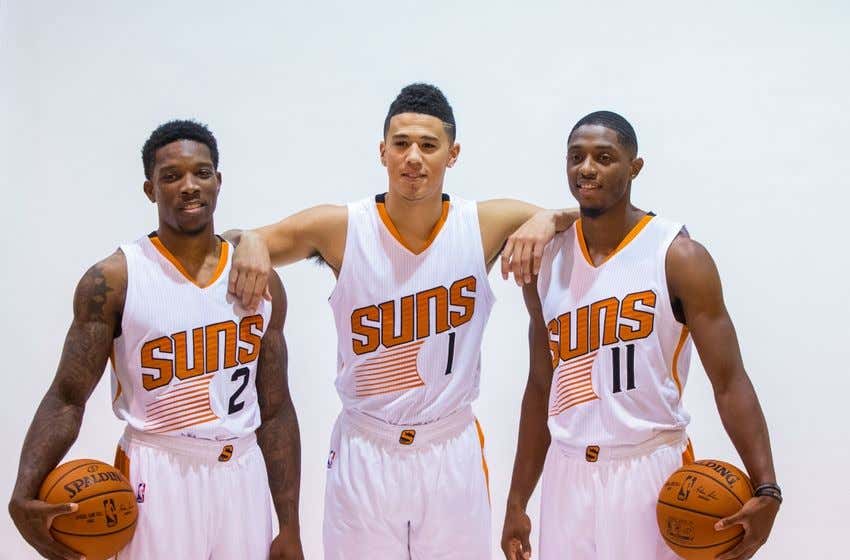 is an upgrade no matter how you slice it. I LOVE how they throw a shoutout to their old jersey with a logo on the waist, and the new design on the side of the shorts. You reference that jersey and I’m going to love you for it 10 times out of 10. The purple one is gorgeous.

Another example of a historic franchise undergoing just a slight update. Done are the multi colors of the city/team name, instead going with a cleaner look that still looks great. I like how they kept a little bit of that font flare with the first letter, that’s similar to how it was before the switch. 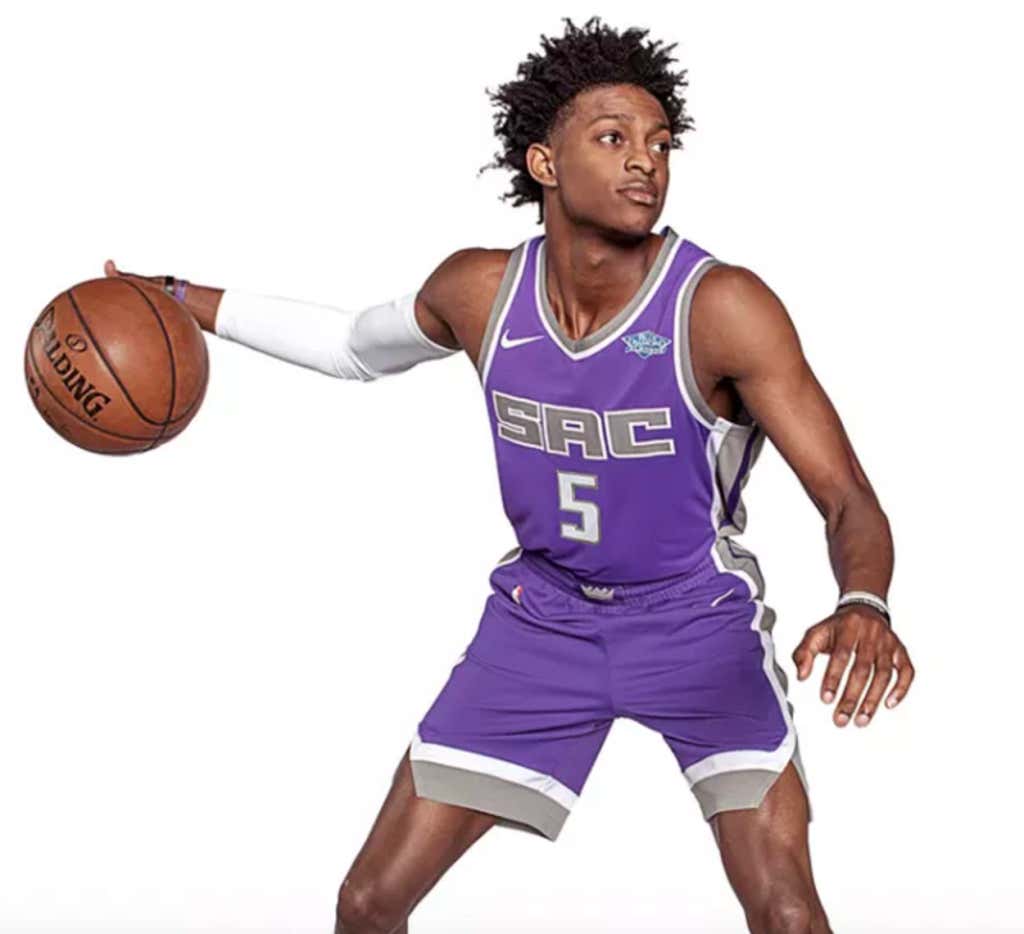 Between the Draft, Free Agency, and their uniforms, this might have been the best summer in Sacramento Kings history. Nothing major, they mostly just moved the crown from the top to the waist, and the colors are a bit lighter, but at least they didn’t do something crazy and actually look like a basketball team. I wasn’t shy in their preview, I think they can have a POR/DENish type season if everything clicks.

Sadly, not only did the Wizards run out of money to address their glaring bench issue, they also could not afford new jerseys. The Wizards as a franchise have been all over the map with their jerseys, some good, others a complete disaster. There’s certainly nothing wrong with this look, and considering they just updated their it a few years ago this isn’t really a surprise, just disappointing. King of like their season.

Overall, pretty strong showing from Nike. I thought only a handful of the ones we’ve seen so far haven’t been too hot, and I’m glad they didn’t mess with some of the iconic jerseys from the league. I will say this though, I DESPISE the ad sponsors just like I thought I would. There’s no denying they suck, I don’t care how much money they make teams, there has to be other ways to get that sponsorship out there. They are too distracting and frankly look terrible. Unfortunately, they aren’t going anywhere, and if anything it’s probably going to get worse.

There’s still a bunch of teams that haven’t been released yet, including a couple that could definitely look much different come October. Should we care about this? Probably not, but its goddamn August and I’ll take whatever NBA nugget I can get.