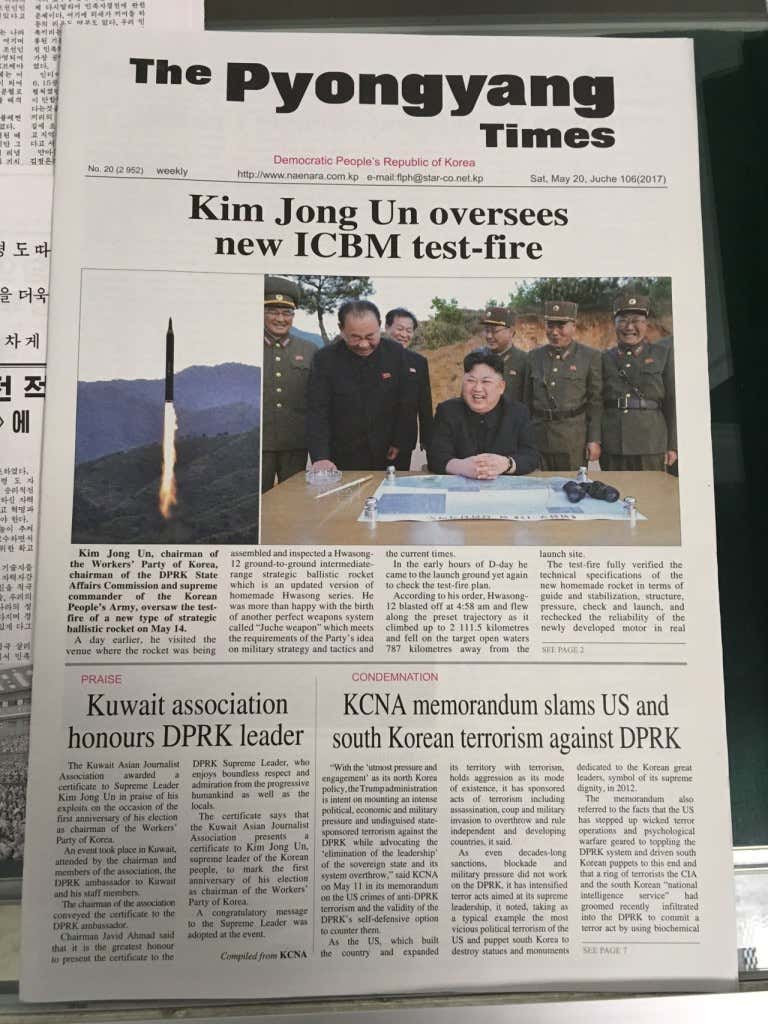 Note from the foreign corresDONdent: Remember when Barstool HQ received a postcard from North Korea? Well it was from a British Stoolie (MaxiBigTweets) who visited the land of Jim Kong for 5 days recently. He sent me a blog recapping his experience and seeing how approximately 0% of Stoolies plan on visiting the “hermit kingdom” anytime soon, I thought it’d be worth sharing with the readers. Especially seeing how we may be going to nuclear war with them in the near future… 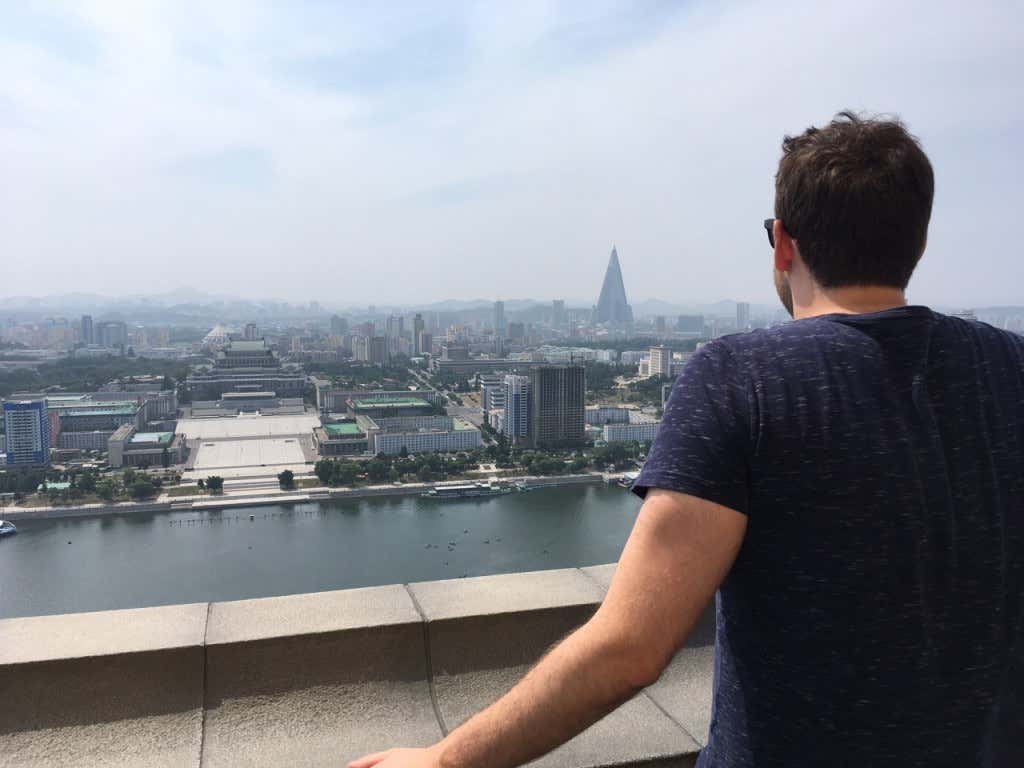 I’ve always loved traveling. Not in the way girls on Tinder say “I love to travel!” but in the way that I actually get out of England and go places. North Korea was the 53rd country I’ve been to. I’d love to go to all 198 but some of them are even harder to get to than North Korea (which was surprisingly easy for an Englishman at least).

I had a few weeks free time between finishing my old job and starting the next one and I had always thought North Korea sounded like an interesting place – like nowhere else you could ever see. I had also been listening to the Pat McAfee show a lot, so the constant mentions of North Korea had it at the front of my mind (even if the constant warnings against it didn’t put me off).

I knew of a tour company, so I booked a place, sorted out my Chinese visa whilst the tour company sorted out the paper North Korean one (you don’t get a stamp in the passport, total bummer…), booked a plane ride out to Beijing. My preparation was: watching The Interview and Team America, reading Vice Articles. I flew out to Beijing where I then took an overnight train to Pyongyang. 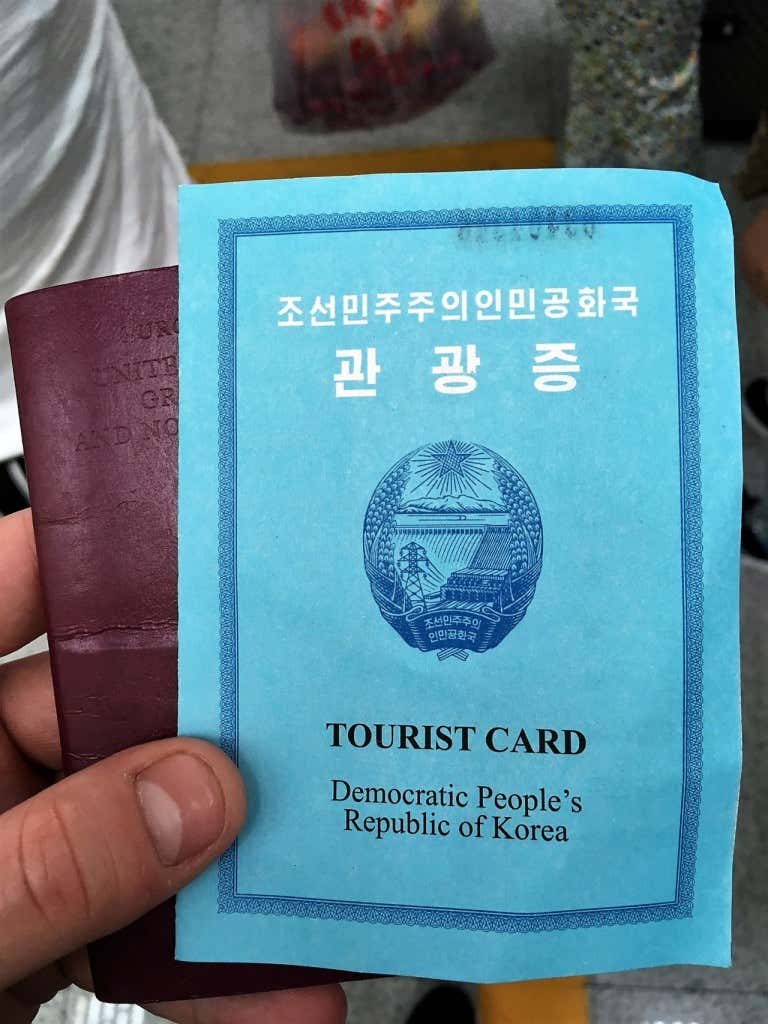 The train takes 24 hours and isn’t built for comfort. At 6’5” and a former Nose Tackle, I’m not exactly the right size for North Korean train beds. I also woke up around 4 a.m. to a Korean woman stroking my foot. Pretty odd sensation, but alas this was not the first step towards a forbidden Anglo-North Korean romance. 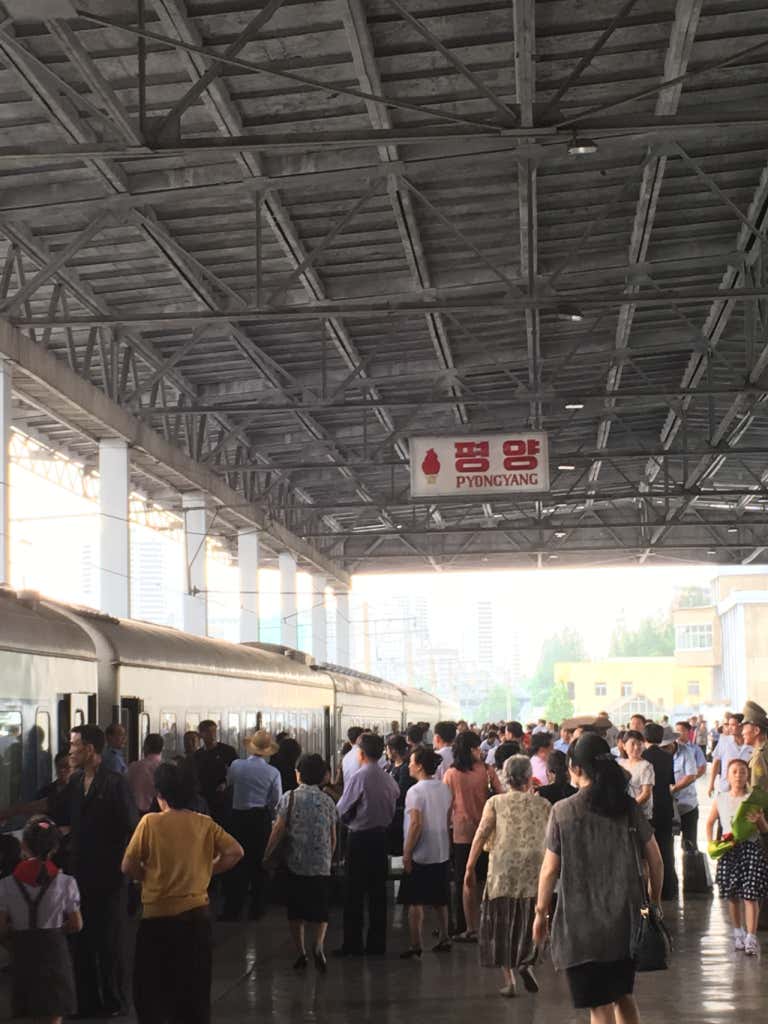 Once you arrive in Pyongyang, none of the locals really pay you any attention at all. In China, India, other places in Asia, people love to stare at the big white guy and often ask for pictures. In Korea, it’s like you’re not even there. Most people seemed pleasant enough but it’s impossible to know how much is put on to impress tourists. It does seem like it’d be a lot of effort to get an entire city into shape for just for a few tourists though. We had a little walk before dinner the first night down by the river where I saw some children playing cards and a few men fishing. It was a lovely Summer’s day by the river… the kids were then shouted at for playing cards. 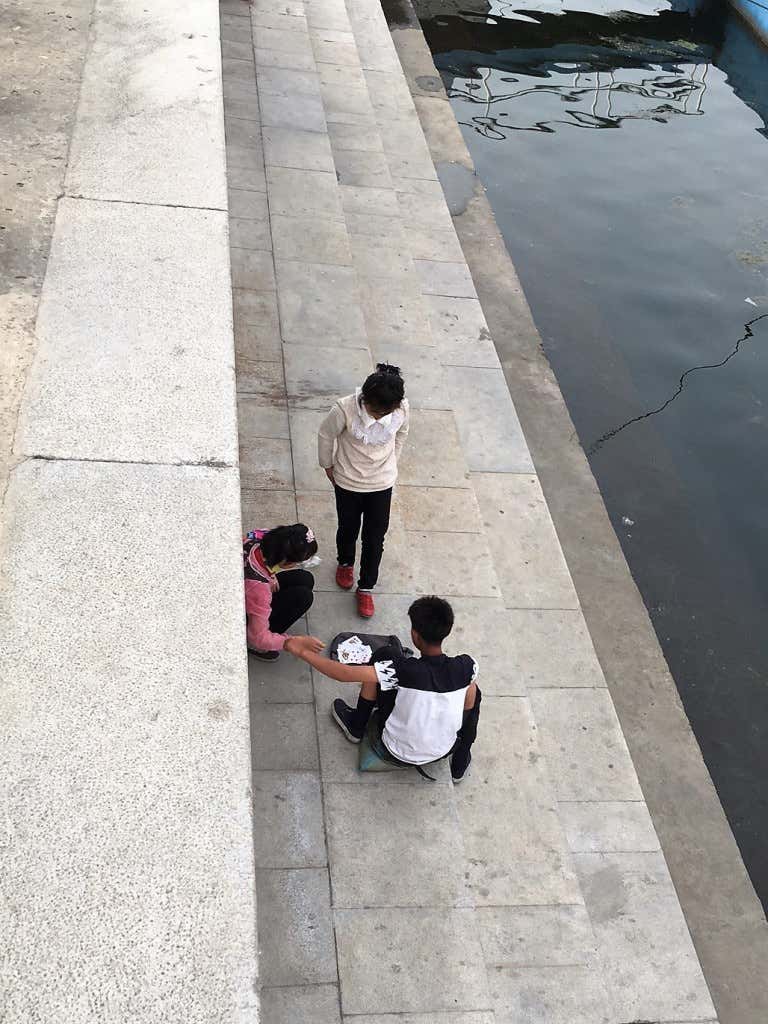 We headed to the Koryo Hotel. Built in 1985, under Kim Il-Sung, it was meant to “showcase the glory and strength of the DPRK.” It has not one, but two revolving restaurants, so that’s pretty glorious, even if one of them is permanently closed. Apparently, it also has a casino, we never saw this. It feels like the rooms haven’t changed since 1985. All the bedrooms also have a swing-open knee-high to ceiling window. They could definitely make it look like an accident if you fell out. 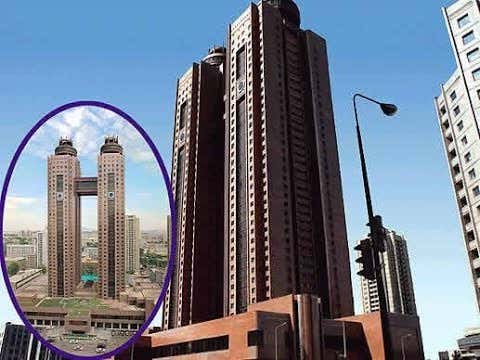 We had dinner in the restaurant next to the hotel, the food was pretty awful, I still have no idea what meat we were served (although I know it wasn’t dog because that’s a delicacy you have to pay extra for). No offer of a post dinner sample of crystal meth. The whole evening the TVs in the restaurant showed either videos of military parades or war movies. We had a few “craft local beers”, they cost $1 each so obviously you’re gonna drink a few (you pay in U.S. Dollars, Euros or Chinese Yuan, but not in British Pounds…)  I would later find out that all their beer is one of three flavours of beer: light, dark, or disgusting. 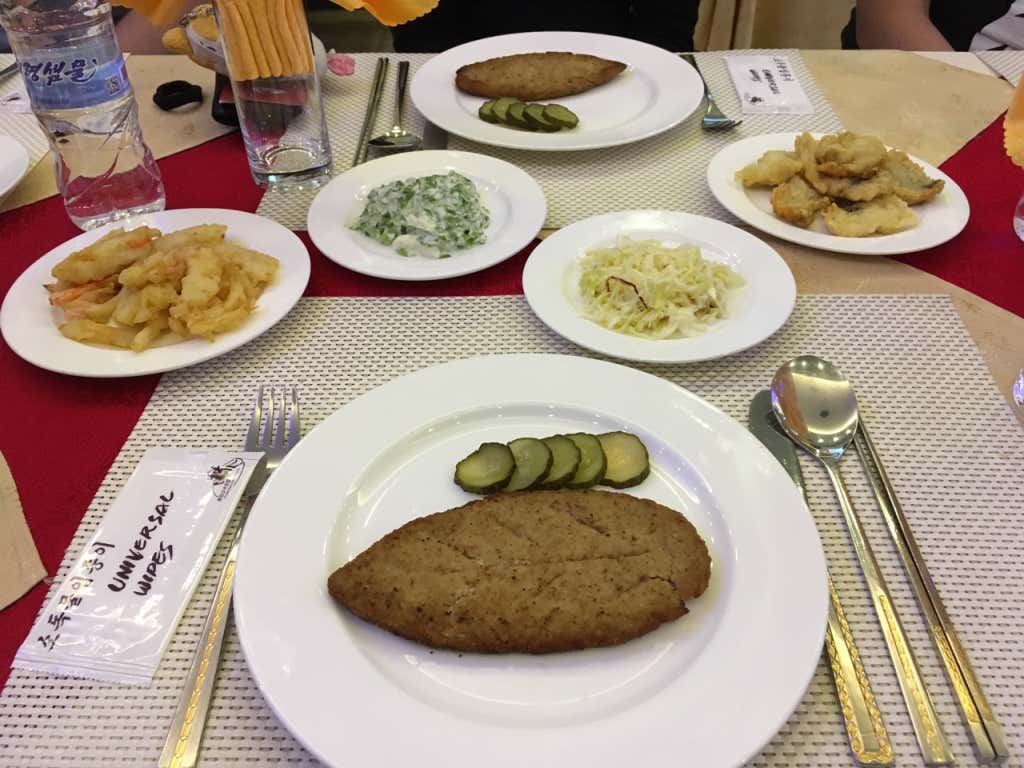 Afterward, we were allowed to head back to the hotel in our own time. My first taste of North Korean freedom, walking outside without a guide! It’s weird walking outside at night. There are a lot of tower blocks but it looks like none have their lights on, or the lights are very dim. We did experience a couple of power cuts whilst we were there, people carried on like nothing happened.

Next morning on the way to the bus stop, I saw a woman with an AK47 on her back walking to work. She was foxy. The bus then drove by a little square where a few dozen women were out performing a cheerleading-style routine to encourage the men on their way to work. I feel like my morning commute to work would be better with more cheerleaders. 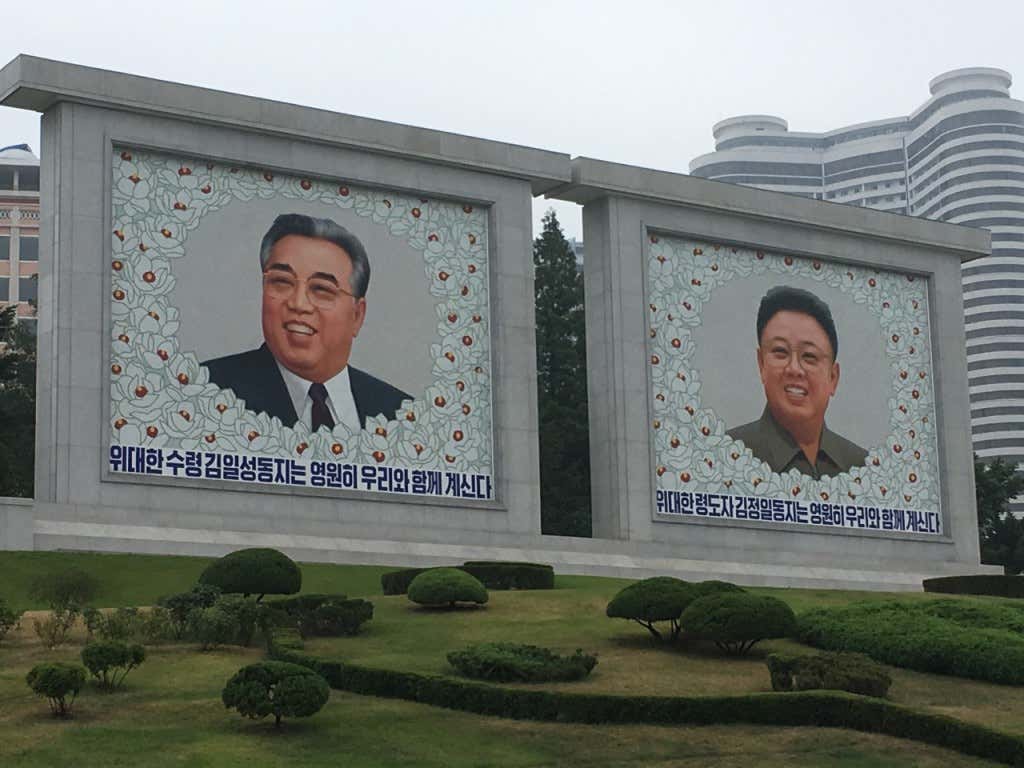 It’s about a 120-mile drive to the Demilitarized Zone from Pyongyang. That should take like 2 hours driving, but our coach took way longer. Absolutely zero traffic on the route, I could have counted the cars that passed us on two hands, but the roads suck. 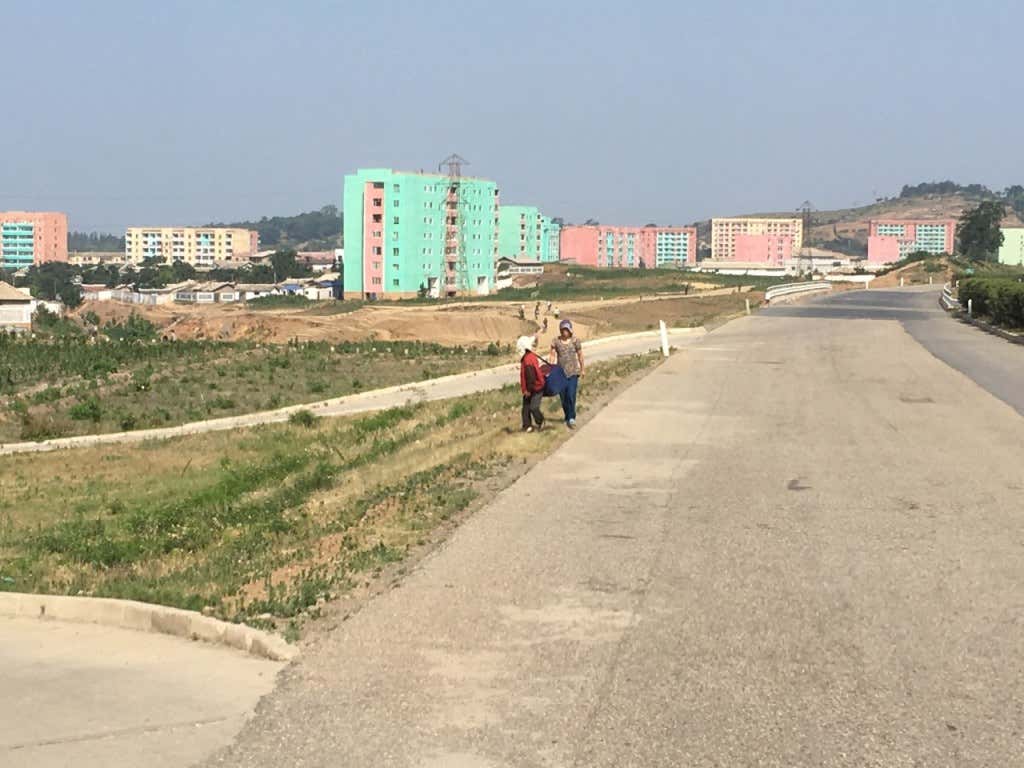 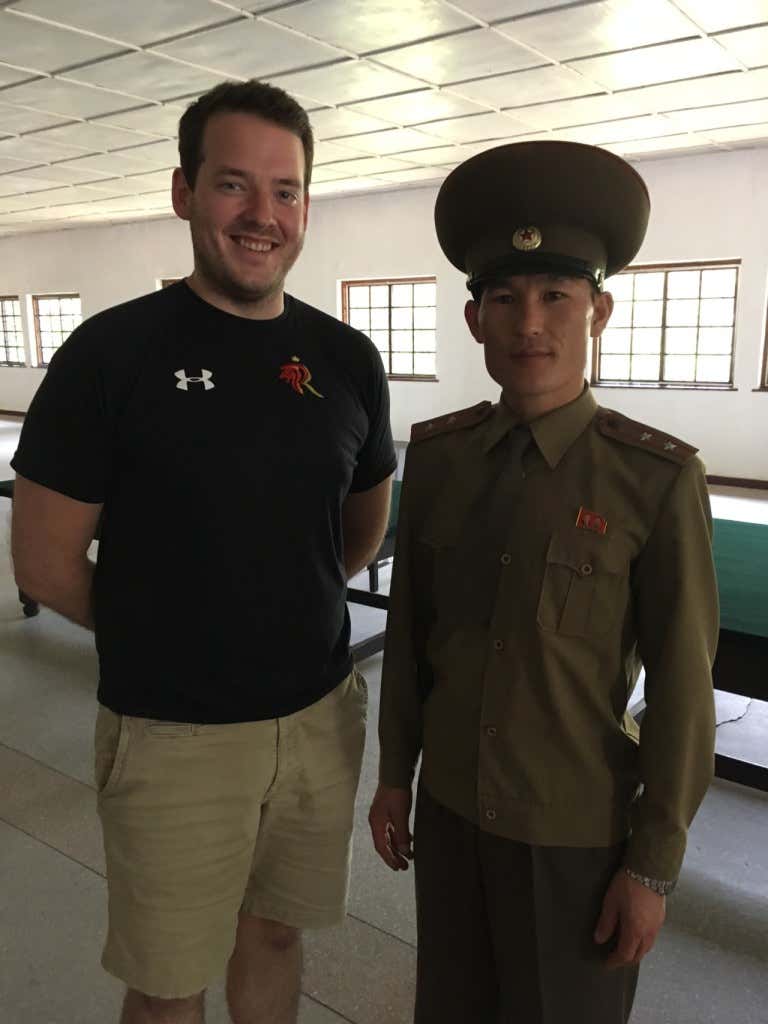 Next we went to visit some monuments including

– The Chollima Statue: A Chollima is a winged horse, like Hercules’ Pegasus. It symbolises the Chollima speed which inspires the North Korean people to work hard. We were told that when they build skyscrapers, the workers inspired by Chollima can build one story of a building every 14 minutes. I believe when they say “inspired by Chollima speed”, they mean “taking a ton of crystal meth” (tour guide could not confirm this)

-Their Arch of Triumph: looks the same as the one in Paris, but theirs is 33 feet taller. Suck it Paris. 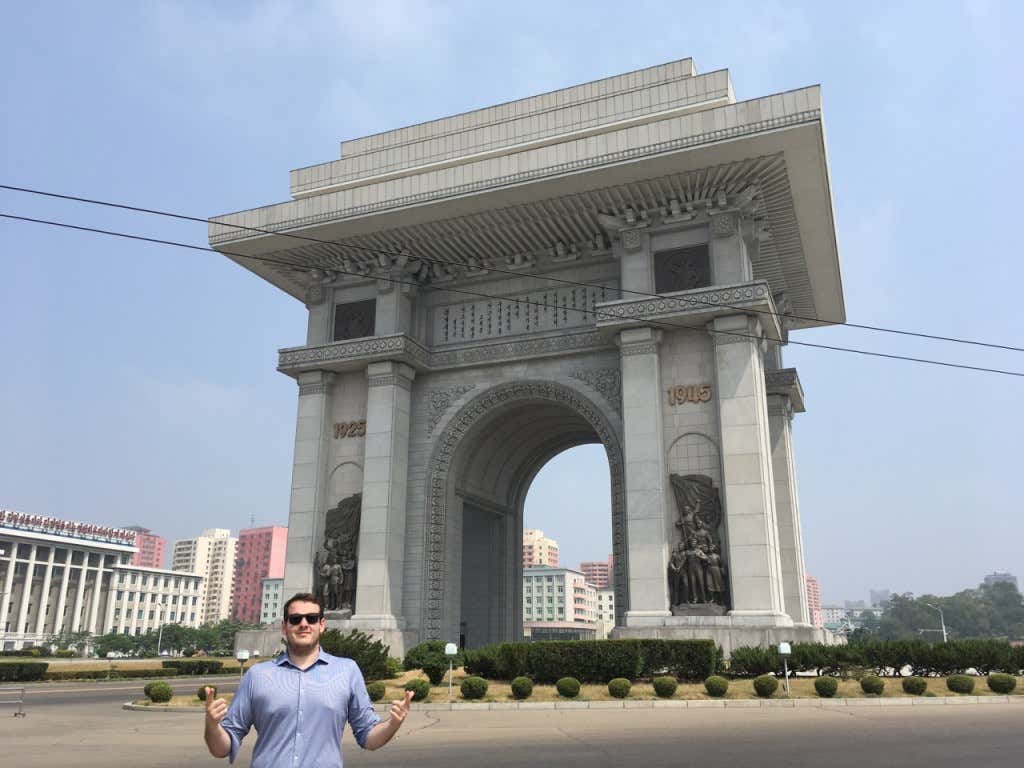 – The Juche Tower: which is roughly 3ft taller than the Washington Monument. They love buildings that are slightly taller than other famous buildings. It has 25,550 bricks, one for each day of Kim Il-Sung’s life. 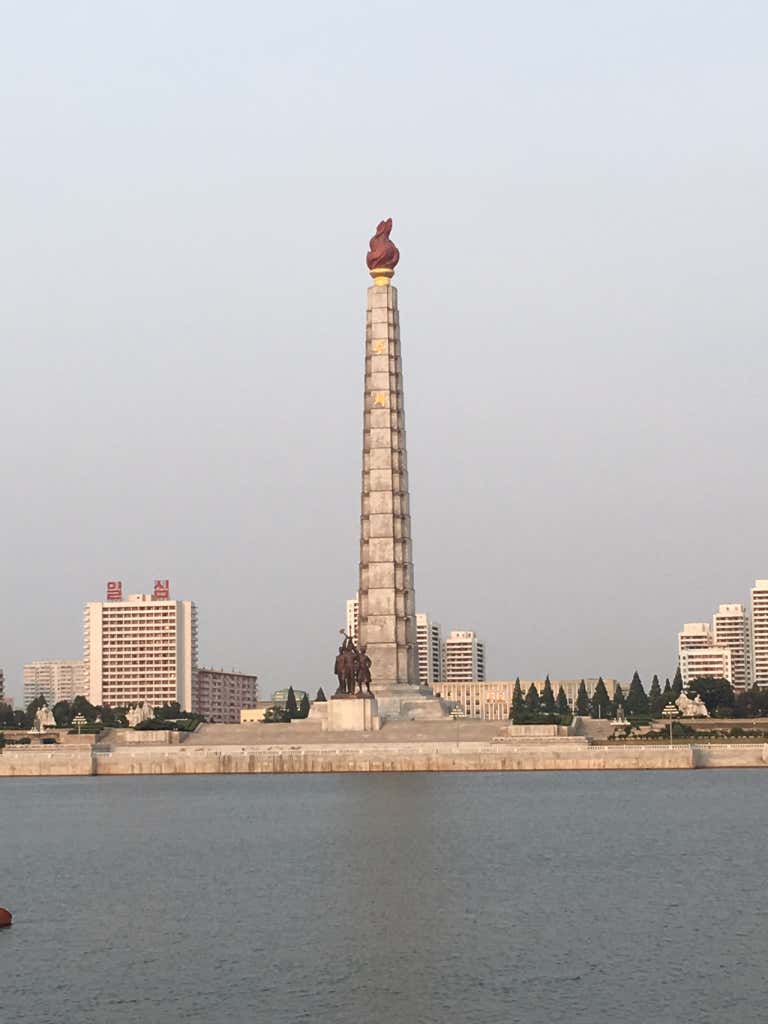 – Grand People’s Study House: a massive library, with over 10,000 books Kim Il-Sung wrote (one of which I bought a copy of, will have to send it to you guys). People are allowed to use the “internet” here (essentially an intranet, with approved websites, including a North Korean dating website, and Facebook equivalent)

Other highlights of the trip included

– The Military Museum: I have never seen a military museum as big, as well stocked, as well cared for and as well loved by the people of North Korea. They genuinely believe the Americans started the Korean War which is just nuts. We were told not to take pictures inside the museum, but I couldn’t believe some of the things I was reading, so tried to sneak in a picture. Two seconds later I caught a security woman tattling on me. What a snitch.

Their military museum has a ton of captured American military equipment, including the USS Pueblo, the only American “warship” (communications ship) in captivity. 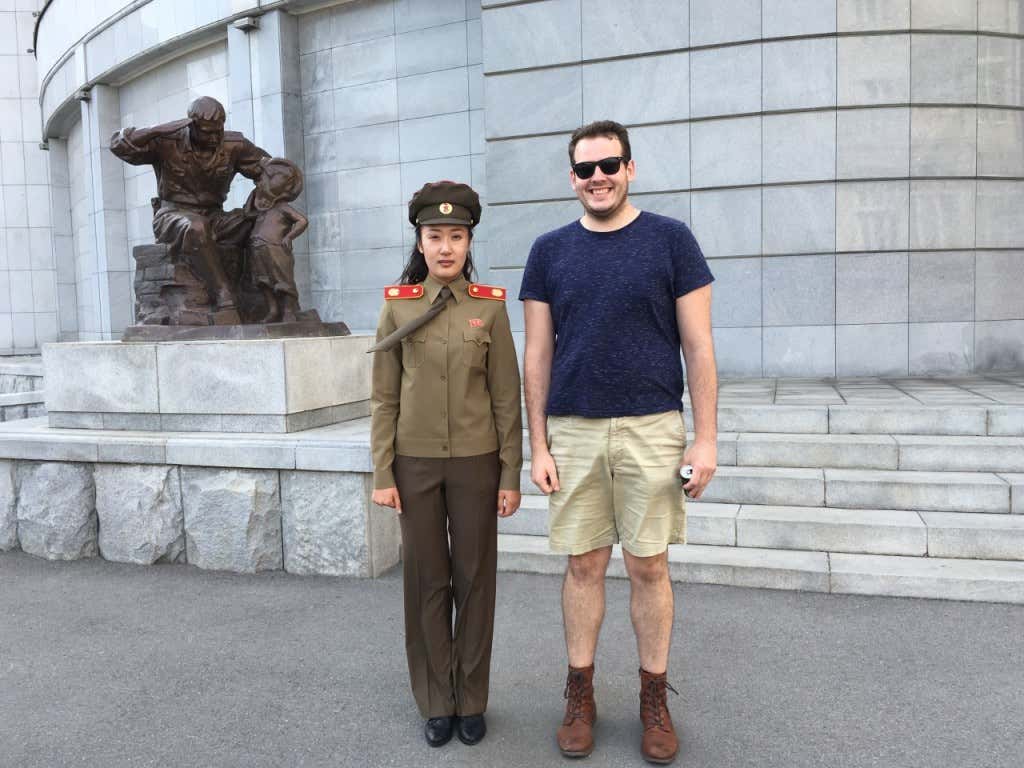 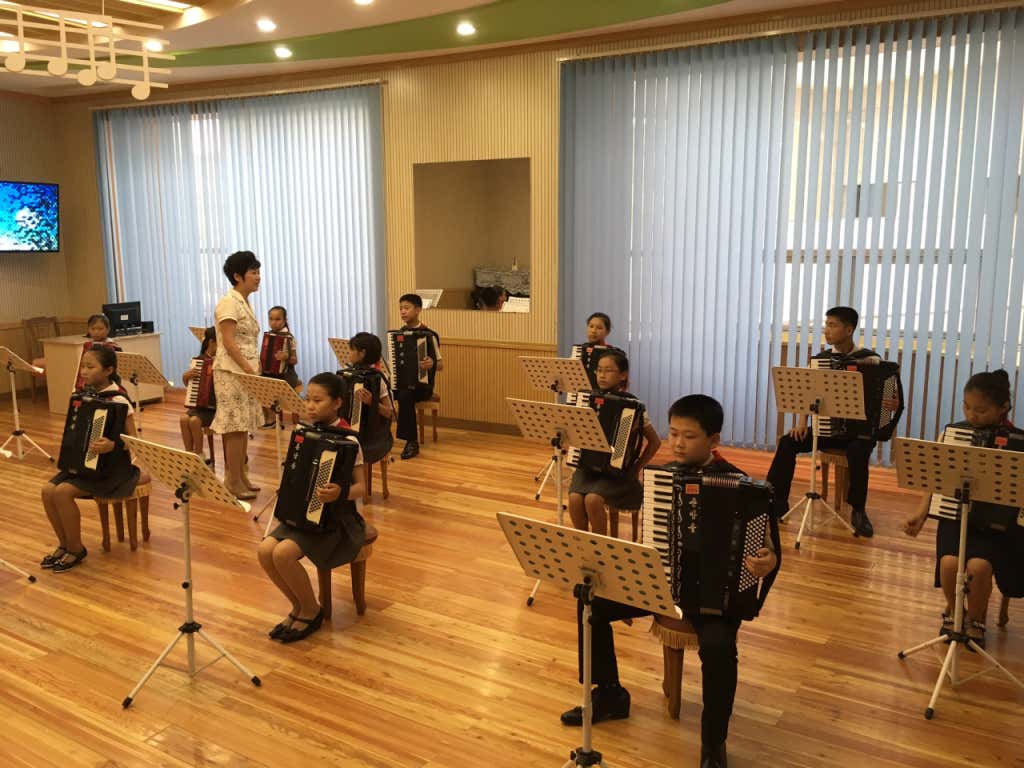 A public after-school club that apparently all children age 9-15 can come to. Built because the North Koreans believe the children are the future, and so they deserve a palace. It’s 120+ rooms of child prodigies playing every musical instrument there is, dancing, singing, painting, playing sports, all to an elite level. There is absolutely no way that these kids are coming here for an hour or two after school, they’ve got to be there all-day every-day to even possibly be that good, that well choreographed and scripted. They are incredible. We capped off our visit with a trip to the 2,000 seat theatre where they put on quite the show for us. The finale included 10 young boys singing in Korean, whilst a video of nuclear bombs, tanks and rockets rolls in the background. 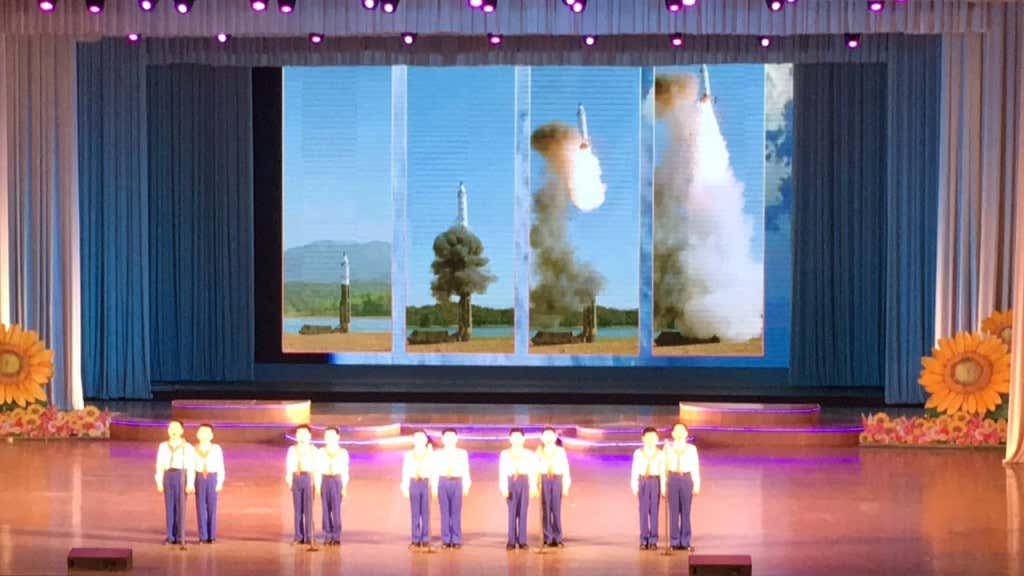