Lots to love about this fight. Obviously the first thing that jumps out at you is the attire of our two gladiators. 9 times out of 10 the chubbier guy with glasses is the one wearing a Batman shirt. But the first fight of the preseason also usually involves Raiders fans, Eagles fans, or someone knocking out a Cowboys fan. So we knew from the jump this fight would be something different since Titans fans were rumbling. And I can’t blame them one bit. The Titans have been forgettable for years now. They have sweet jerseys and their nickname is okay, but that’s about it. When they are on the Red Zone Channel, everyone in the room grumbles. Their fantasy players don’t even really excite anyone. And the best coach in Titans history has been a punch line on this blog for years and their former MVP was tragically murdered by his side piece. The Titans have basically turned into the Mike Mularkey of NFL teams. So I imagine Titans fans are always looking for a reason to bash each others skulls in.

Okay lets break down this fight and see what the hell actually happened. Keep Calm And Titan Up guy (sweeeeeet shirt btw) starts out by holding Batman Guy’s wallet. How the fuck does that happen? Is pickpocketing a thing down in Tennessee? Do they live by the code Finders Keepers, Losers Weepers? I have so many questions.

Anyway, Batman Guy throws a sneaky punch that looked harmless at first. I had to watch the video three times to figure out how Keep Calm started bleeding like vintage Ric Flair. I took a screenshot of the punch for the thumbnail of the blog and based on that picture alone, and upon further review it appears Batman Guy almost knocked Keep Calm’s melon off. 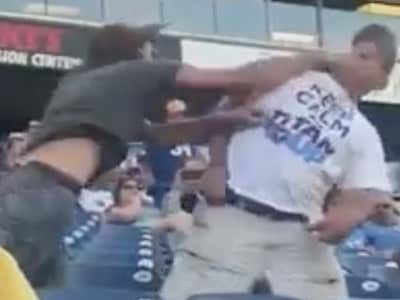 However while Batman Guy has a sneaky strong right hand, his biggest weakness is clearly balance. Dude falls over and Keep Calm pounces on him instantly like Titans great Albert Haynesworth’s cleat on a player’s face. The only problem? Keep Calm’s punches are weaker than Chun Li’s jabs.

What the fuck was that? Then to make matters worse, Keep Calm’s clone appears out of NOWHERE to jump into the mix and keep the peace while Keep Calm empties every ounce of hemoglobin onto his clone’s arm. Batman Guy obviously gets a few rabbit punches in like anyone would in that scenario. Batman may have a code to not kill any of his enemies, but he will apparently hit a man when he is being held back. And to be honest, I don’t hate the move one bit. He didn’t hear no bell. 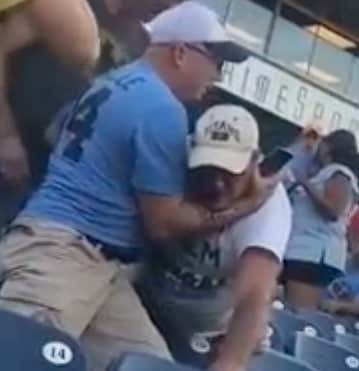 And then when you think the action is over other than Keep Calm potentially bleeding out and dying right there at Whatever The Fuck Titans Field Is Called, Batman Guy tries to escape to the Batcave after what I’m guessing was a response pickpocketing? I’m honestly not sure. But he BOOKED the fuck outta there like he stole something and security came from the rafters like (TRIGGER WARNING FOR #BILLSMAFIA) Frank Wychek during the Music City Miracle to thunderous applause.

In the end, it was not the best preseason fight I have ever seen but certainly not the worse either. Ironically, everything could have been prevented if both guys had simply kept calm and Titaned up.