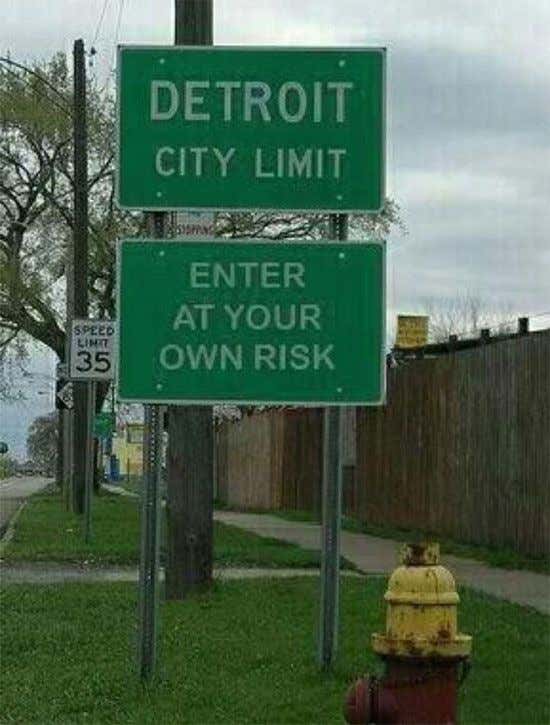 (Source)- Half of the eight mayoral hopefuls on Detroit’s primary ballot next week have been convicted of felony crimes involving drugs, assault or weapons, a Detroit News analysis shows. Three were charged with gun crimes and two for assault with intent to commit murder. Some of the offenses date back decades, the earliest to 1977. The most recent was in 2008.

DEEEEEEE-TROIIIIIIT POLITICCCCCCCCCS!!! I feel like a wise man at one point probably said a government should be a reflection of the people its ruling. And as someone that admittedly has only been to Detroit once but has seen it on the news plenty of times, this story seemingly checks the box with one big fat checkmark for that quote. Not that there is anything wrong with it. Like I said last week when we saw our first Kyrie Irving jersey burning by a Cavs fan, it’s important for cities to embrace their identity. Clevelanders will run hot and cold for their athletes based on whether they are leading them to a championship or abandoning the city and leaving the team in ruins. Floridians are meth-crazed lunatics. My fellow New Yorkers are filled to the brim with hate and spite because the city is an overpriced garbage hole. And people from Detroit commit felonies. That simple. No need for spinzones like this:

Political consultant Greg Bowens said there are candidates with past hardships in every election cycle. It’s not something unique to Detroit or the political arena in general, he said.

“Black marks on your record show you have lived a little and have overcome some challenges,” said Bowens”

Okay that last spinzone was a 10/10. It was like when I tell people I like being a Mets fan because it builds character.

But nonetheless, I can get down with a felon being a politician. People with squeaky clean records flip sides like Anakin once they get elected. Why can’t felons get a chance to actually govern?

I mean when you take a look at the things the four felons did, you can kinda see where each was coming from. One had a concealed weapon charge. One was allegedly slinging weed. One was charged with assault with intent to murder (which she says was wrongfully charged). And one got into a shootout over at an auto shop over a repair bill. Who hasn’t had carried some sort of badass weapon in their life? I still get a rush the first time my fingers touched a katana blade like Leonardo. Weed is basically legal in America now. We’ve all been blamed for shit we didn’t do. And the shootout at the auto shop may be the most relatable move in the bunch. All you hear about is how mechanics overcharge people or break something else after they fix something. 95% of us wanted to get into a shootout with the auto shop, but we just didn’t have the balls and/or the weapon. Becoming an elected official is the original “For the common man, by the common man” which is why these four felons can govern my ass any day of the week.

However, if none of these candidates can save the Motor City, I know there is one man fit for the job of Detroit mayor.