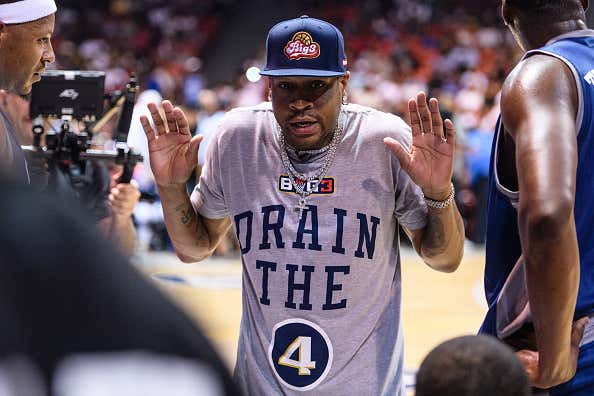 Alright so just to get everybody caught up to speed real quick, Allen Iverson was a no-show at the Big3 event in Dallas this weekend because he got caught up in a heater at a casino in Chicago. Classic AI. So to explain his absence to the fans of the Big3, Allen Iverson put out that statement you see above. Which didn’t explain anything at all but it was an “issued statement” filled with words that were center aligned. Seems good enough to me. But not for the Big3 because the league came out today and “suspended” AI for 1 game. Suspended the dude who doesn’t want to play. Suspended the guy who doesn’t even want to show up to the events. “Oh, what’s that Allen? You don’t want to play in this ridiculous gimmick basketball league anymore filled with washed up players and commissioned by Ice Cube? Well guess what, bucko. You’re SUSPENDED!!!”

It’s like shooting somebody in the face and the judge tells you that you just won a million dollars. It’s actually incredible how well AI played this whole thing. He gets involved from the very beginning and right off the bat the hype machine starts turning. Having Allen Iverson in the league is really the only marketing they needed to sell out arenas all over the country to watch 3v3 basketball. So he gets paid whatever he got paid. Played a couple of games in the beginning but not really. Sat out the game in Philly because he didn’t want to embarrass himself in front of the Philly crowd. Sat out but coached the game in Chicago because he needed to sell his “injury” excuse why he didn’t play in Philly. Didn’t even show up to Dallas and now he gets to be suspended. It’s genius.

Maybe his public image is taking a hit here but not really. Did anybody expect anything else from AI? If you did, that’s more on you than it is on him. Allen Iverson never wanted to play 3v3 basketball. But he did want to get paid. And he found the perfect way to do just that. Again, you can roast the man all you want for deceiving the fans. But anyone who didn’t see this coming a mile away was only deceiving themselves anyway.