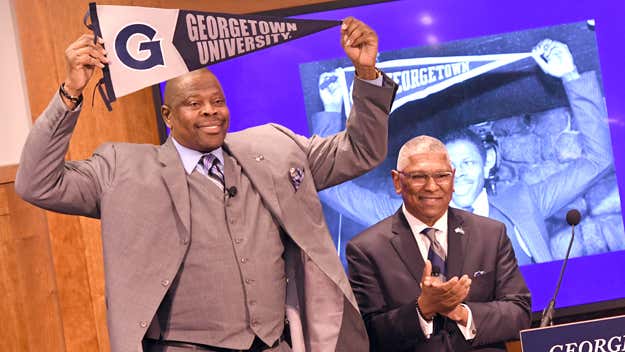 Georgetown Pulls Out of Nike PK80 Event, DePaul In

This is a bad look for Georgetown. They were selected to play in the Phil Knight 80 Tournament hosted by Nike. It’s the best tournament this season as it includes teams like UNC, Oklahoma, Arkansas, Duke, Michigan State, UConn, Oregon, Ohio State, Butler, Florida, Texas and Stanford. Georgetown was supposed to be on that list (as is Portland and Portland State) but backed out yesterday and was replaced by DePaul. The reasoning behind this is suspect, but really it’s wanting to protect Patrick Ewing in his first year as head coach. They were scheduled to play Michigan State in the first game, who is a top-3 team in the country, but now can schedule some more cupcake  games at home to make Ewing’s first year look more successful as the roster still isn’t what we’re used to seeing for Georgetown. This is why I’ve been on the fence about this – Georgetown staying within the John Thompson family – from the get go. Ewing won the press conference, it was an easy press conference to win, but now the real judging starts. He filled out his coaching staff, which looks to be okay, has gotten a couple recruits, but this is a major step back for the program. Throw in the fact they were replaced by DePaul and it’s even more laughable. If I’m a Georgetown fan, I want to play in this event. Maybe you pull off an upset, maybe you compete or maybe you lose. Regardless you’re essentially saying we’re not a premier program, which they aren’t at the moment, but Georgetown fans usually refuse to believe that. That’s what has made the Big East so impressive. They’ve been in the top-3 conference (per KenPom) for 3 of the 4 years with Georgetown being pretty irrelevant. This is the statement from Georgetown’s AD: 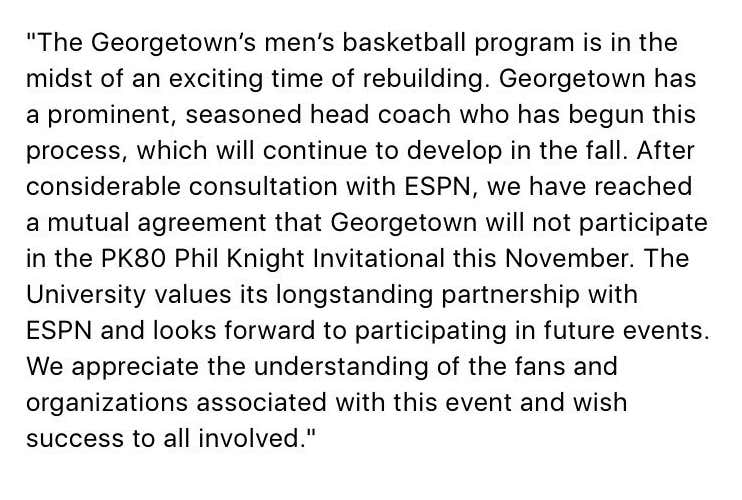 I’ve blogged a bunch about Mitchell Robinson because it’s such an interesting story. You have this top-10 talent going to a C-USA school and then the drama unfolds of the coaching staff including his godfather leaving, whether he’s on campus or not. Now, we know he’s not going to play for WKU. He was granted a release by Western Kentucky last night with a restriction of going to any other C-USA school, which I can assure you was never going to happen. That means it’s step 1 for him to play college basketball this year. He needs to get a NCAA waiver to be eligible to play this year still with the likely landing spot being LSU. It would be a massive get for Will Wade in his first year as head coach there as he’d be able to keep Robinson home and get a NBA lottery guy in a league that has Michael Porter, Colin Sexton, all the guys at Kentucky and a top-10 team in Florida. I still think the smart play for Robinson is to go overseas for the year, get paid, and still be a lottery pick.

Braxton Beverly Fighting the NCAA to Play at NC State this Year:

Here’s yet another reason why the NCAA is a goddamn joke. Seriously, what I would do to overthrow Mark Emmert and correctly run this organization. Beverly was a 3-star coming out of high school, who signed his letter of intent to play for Ohio State when Thad Matta was the head coach there. Obviously Matta has been fired since then and Beverly transferred to NC State, before even playing 1 second for Ohio State (he’s in the class of 2017). The reason why he needs a NCAA waiver despite getting the clearance to transfer from Ohio State? Matta was fired in June, after summer classes started which Beverly attended. This is obviously under the assumption that he would be playing for Matta not Chris Holtmann. So because he went to class, by rule, he has to sit out a year. It’s a complete joke. The NCAA continues to be an embarrassment of an organization and one that truly shows it’s not about the student-athlete that it claims to be. That’s why I’m all for player rights. They deserve the right to transfer no matter what. Who cares? They deserve the right to make some money off their likeness similar to how the NCAA takes their likeness and makes millions. There’s no justification here for the NCAA to block this happening this year. Again, this is simply because Beverly attended a summer class as to why he can’t play this year. Say the NCAA blocks this from happening and makes him sit out this year, why would anyone ever attend summer class as a freshman? It does 0 but give all the power to schools and the NCAA. At some point this needs to be addressed and the NCAA needs to be fixed. For the love of God just fire Mark Emmert, he’s one of the worst leaders out there.

I know people will scoff at this as Bruce Weber has sort just been whatever with Kansas State, but from the schools side this makes complete sense. They extended him two more years without giving him much of a raise. What it does though is lower his buyout after the 2019 season from $2 million to $500,000. That’s a massive drop that helps the school-  which just hired a new AD. That gives him a few years to work with Weber and then can cut him if he feels like a change needs to be made. Kansas State made the NCAA Tournament last year, winning one of the play-in games against Wake Forest. They return most of that team but do lose Wesley Iwundu and DJ Johnson.

Reddish is a top-5 player in the class of 2018 and announced he’s down to five schools. They are Kentucky, Duke, UCLA, Villanova and UConn. The common belief is it’s really a two-horse race between Duke and Kentucky. Reddish is a 6’7″ wing, who everyone believes is the best perimeter player in the class. He was fifth in the EYBL in scoring this year and can really attack you both off the bounce or with a shot. Here’s his obligatory mixtape.