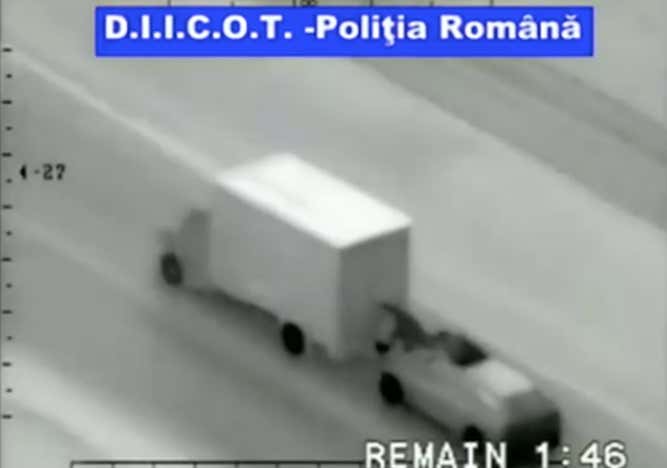 Source –   According to the Associated Press, five Romanian men were arrested on Saturday under suspicion of stealing $590,000 worth of iPhones from a moving vehicle.

The men, aged 33 to 43, hopped in a van and reportedly tailed a delivery truck. Then they did something you probably thought only happened in the movies.

Two of them climbed out of the sun roof and onto the hood of van before breaking into the delivery truck — all while both vehicles were moving down a Dutch highway in the middle of the night. Once the men were in the delivery truck, they passed boxes of iPhones back to the van and fled with the goods.

Dutch police have recovered the iPhones and the van the men used during this incredible display of bravery and stupidity. Dutch officials think this five-member gang is responsible for 17 of these insane highway stunts over the past two years. The men are set to appear in court on Tuesday.

The only possible explanation for this crazy dutch bastard’s behavior is a Fast and Furious binge. It has to be. It’s the exact same thing except more boring. No one got shot, the car didn’t have under glow and  they were stealing iPhones instead of DvD players. Underwhelming all around. I wanted him to jack the brakes or swerve or do something. I know the Dutch are a notoriously silent people but still. I’d rather watch a smash and go.

I don’t understand any part of this. So you survive the initial heist, get the phones, then you have to move the most traceable item on earth without being traded. Sounds like a nightmare. Work smart not hard, thieves. I’m not even going to get into the fact that a helicopter was filming the entire thing go down. I don’t know what kind of American movies they have in Holland but we need to send them The Town or The Italian Job. Give them a realistic idea of how a robbery is suppose to go down. God forbid they get their hands on The Transporter of James Bond. The entire country would turn into a movie set. If it ain’t broke don’t fix it, robbers. And next time you suck me in with an unreal title I better see some action.