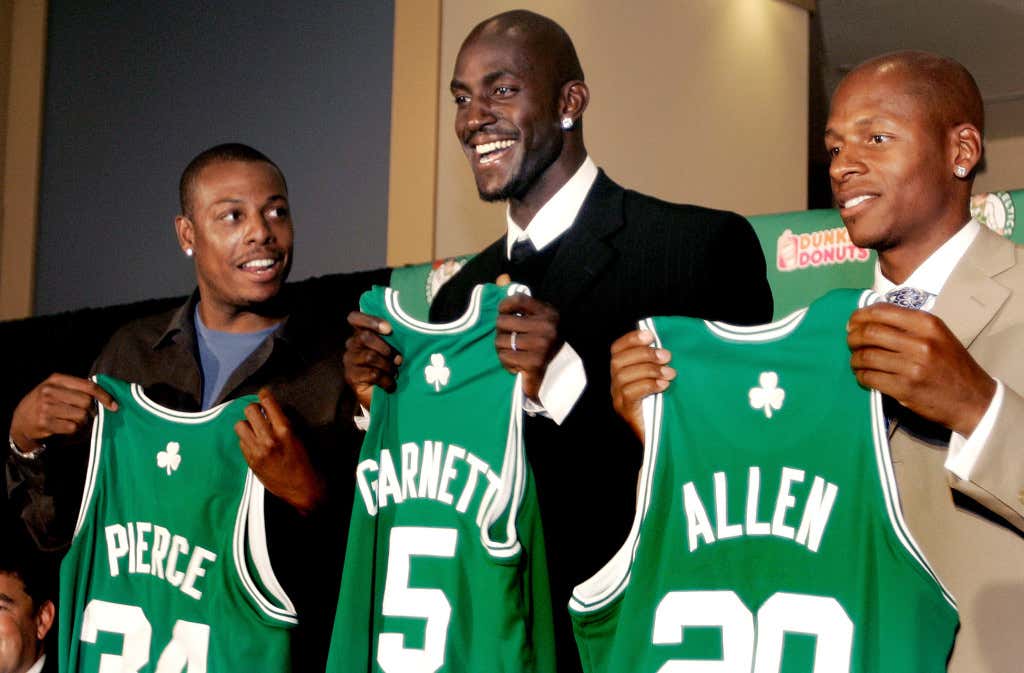 July 31, 2007. Do you remember where you were? I’ll never forget. I was in Arizona, a junior at ASU sitting in my then girlfriend’s kitchen probably fighting about absolute nonsense when I saw this BREAKING NEWS: slide across the screen on ESPN. I freaked the fuck out just like anyone else who has a rooting interest in this team. My mind could not comprehend what my eyes were reading. There was shock, excitement, disbelief, every emotion under the sun all came at once. It was a feeling I’ll never forget. This commercial sums it up perfectly.

This really is how people reacted. It was like a dark cloud have been lifted from this franchise after going through what was the worst regular season of my lifetime. Their 24-58 record was the second lowest win total in a non lockout year since the the mid 90s season. To truly appreciate how crazy this situation was, you have to take a look at where the Celtics were coming from before July 31, 2007. They had lost 18 games in a row the season prior, Paul Pierce, the franchise’s best player at the time, was approaching 30 and had just missed 35 games with a foot injury. He wanted changes or a new team. The Celtics finished 23 games back of the top spot in their division, were 28th out of 30 in Offensive Rating, and 16th out of 30 in Defensive Rating. To put it simply, this team STUNK. It stunk real bad. For their coach Doc Rivers, he had just finished his third season with the team, and saw his win total drop from 45 his first year, to 33 his second year, to 24 in Year 3. Safe to say he was under the microscope in the same way his players were. Mind you, this was at a time the Patriots had just become a dynasty, the Red Sox broke an 86 year old curse, and there the Celtics were, having one of their worst seasons in franchise history. Times were without a doubt #actuallybad.

All that losing was supposed to be worth it right? I mean the timing was great, with two (at the time) absolute studs coming out in Greg Oden and Kevin Durant. Two can’t miss, franchise altering talents. Pierce was going to get the help he demanded right? WRONG. Don’t let the recent Celtics Lottery success make you forget, the Celtics Lottery history is filled with way more instances like what happened in 2007. The Celtics entered that night with the third best odds at securing the #1 pick (19.6%). Instead, they finished 5th. Portland and their 32-50 record and 5.3% odds came away the big winner, with Seattle (31-51, 8.8%) coming in at number two. The next three teams, MEM/BOS/MIL who had the three worst seasons were shit out of luck. But it wouldn’t last long. On June 28th we saw Ainge’s first piece to the puzzle when he traded Wally/Delonte/Pick 5 for Ray Allen. At the time, it was the best outside talent I’d seen the Celtics trade for in all my days rooting for them. It didn’t make total sense at the time, but that’s why Trader Danny is who he is.

Make no mistake, if Ainge doesn’t pull off that Allen deal, there is no KG, there is no Big 3, there is no culture change, and more importantly, there is no Banner 17. Try and think back to what the NBA landscape was in the East at this time. There was no Lebron and his superteam, instead it was the Detroit Pistons who owned the Eastern Conference. After winning the title in 2003-04, they made the next four ECF at a minimum. Every generation has a team that upstarts have to pass. The Lakers had it with the Celtics, the Bad Boy Pistons had it with the Celtics, the Bulls had it with the Pistons, and in those mid 2000s, the Celtics were going to have to go through Detroit. The Pistons were a veteran team that excelled at slowing the game down and played suffocating defense. That was how you won in the NBA during this time. It was very very different from what we see in today’s game. Basically, in order for the Celtics to be able to pass Detroit, even after the Ray Allen trade, they needed basically a whole new team to do it.

As the old saying goes, it’s not what you know, it’s who you know, and when Danny called his old friend to see what the possibility of luring KG to Boston was, he did not get the best answer. Pierce wasn’t enough to guarantee KG would sign an extension. Then Ainge called back with news that Ray Allen was now part of the equation. Now KG was intrigued. He waived his no trade clause, agreed to sign an extension, and the largest trade for any one player in NBA history was born. McHale did his old buddy Danny a solid that would go on to shape their respective franchises for the next 10 years. Wild.

July 31, 2007 saved the Celtics franchise. All the sudden they got back to playing a style that was familiar to previous generations. Their passion was back, their dedication to defense, selfless play, and playing the right way made an immediate impact. They started the year 29-3. Because the NBA hadn’t seen a trio form like this, with three HOF players still in their semi prime all team up together, nobody was sure how it would all shake out. Who would give up their shots? Who was the alpha? Could the egos coexist?

Well, safe to say things went swimmingly. That first year together the Celtics offense rating jumped to 10th in the league, and their 98.9 Defensive rating led the league. They were ready to overcome Detroit as the best team in the East, which they did in 6 games.

With the addition of a guy like Kevin Garnett, the Celtics Way had been restored. That’s to me probably the biggest contribution these guys did for this franchise, including the title. They restored what it was like to play for the Boston Celtics. This team and franchise was in a dark place, and together they pulled the city and the team to the top of the mountain. Remember, when this trade first happened, people said it was a three year window at best. Every year they were “too old” and every year they proved people wrong. When I look back at this time in Celtics history, I see a group of guys who mentally owned Lebron James, a group that had the biggest Finals comeback in NBA history against the rival Lakers, and during the prime of their run never won fewer than 50 games (39 in 2011 due to lockout). They went from worst to first in their first fucking season together for crying out loud. The 2007-08 Celtics ushered in a new era in how teams in the NBA were built. They by no means invented the idea of a “super team”, but you’ll notice a bunch of teams now knew it took at least three elite blue chip level players to be able compete for an NBA title. You could argue injuries robbed them of at least one more championship, but their impact on the league cannot be argued.

July 31, 2007 will always be a special day for myself and Celtics fans alike. It’s a day that changed our lives. Even as we sit here in 2017, a team that just won 50+ games and secured a #1 seed in the East, a team that just added another All Star talent, as happy as that makes me, it isn’t even in the same universe compared to how I felt on that Tuesday afternoon in Tempe. It was a legit concern that I would never see the Celtics raise a banner in my lifetime, that the best player of my generation would be traded way in the midst of his prime, and that I would never get to experience the thrills and joy of championship level Celtics basketball I had been told about by those who were able to see the 60s/70s/80s Celtics.

So thank you Kevin McHale for doing this city, and this franchise the ultimate solid. Thank you Sam Presti for being willing to give up Ray Allen. Thank you Wyc for paying the luxury tax to keep these guys together for as long as you did. Thank you for beating that asshole Kobe. Thank you for restoring the most historic franchise in league history.

And finally, thank you for a night I will never, ever, ever forget

When you also factor in how the Big 3 were also able to help set up the NEXT 10 years of Celtics basketball, what more can you say. How many trades can literally impact the next 20 years of a franchise? Truly unbelievable and something I don’t think we’ll ever see again.