Things are looking up folks. VERY UP. Remember where the Yanks were three weeks ago? Just absolute disarray, no hope to win a series for the rest of time, not even sure if we should be buyers at the deadline. Well what did Cashman do? He went for it, with a big gamble, and that gamble seems to have paid off in ways we didn’t think were possible. By bolstering the bullpen and turning into probably the best in all of baseball, winning games has become a real thing again. You get the feeling that once New York grabs a lead from the 6th inning on, it’s game over. What else did he do? He hit up his buddy Billy Beane this weekend and negotiated an absolute highway robbery where he landed Sonny Gray from the Oakland A’s. I went BANANAS in the office. Me and Frankie Borrelli celebrated like we were the ones who orchestrated the deal. It was an amazing feeling to get our man. A 5-1 week against the Reds and division foe Tampa was just what the doctor ordered for Cashman to let it rip today. This team can win the World Series. Let’s look back at the great week that was…

As I mentioned earlier today, SONNY GRAY IS A NEW YORK YANKEE.  The best part of all of this is that it didn’t cost Domingo Acevedo. It didn’t cost the God Child Estevan Florial. Nope. We gave up two guys who were once top prospects, but are now just beginning a long, long rehab from devastating injuries. At the end of the day they’re super expendable with a big question mark if they’ll ever return to their top shape. Jorge Mateo was red hot in the minor leagues this year, but that was the first time he’s shown life in the five years he’s been down there. At the end of the day he was expendable as well with such a crowded big league roster to crack. In return they get a bonafide ace (fuck all of you that bring up last year) who will be unreal next to Luis Severino down the stretch. Over his last six starts Gray has posted a 1.38 ERA going 4-2 with at least six innings in every start. His curveball is an absolute HAMMER. Shit drops from right out the sky in the zone, making you buckle your knees looking silly. I always reference the start he made against the Tigers in the 2013 ALDS with the A’s down a game already in the series. In his 11th start of his MLB career, Gray out-dueled Justin Verlander. His start was nothing short of electric.

Although nothing is confirmed yet, it would appear Gray will make his debut Friday night against Corey Kluber. BOY OH BOY what a debut that’ll be. Oh and be on the look out for some T shirts for our new boy.

My man pots and pans. Brett Gardner has become a problem for opposing teams. While currently riding a 12 game hitting streak, Gardy is mashing, especially in the clutch this weekend and collected two walk-off hits and a clutch 9th inning triple that led to tying the game Friday night. He’s already set a career high in home runs and we’ve only just hit August. Is Brett Gardner going to hit 30 home runs this year? It’s certainly possible folks.

Hold the phone Cotton, Chase Headley has returned from the dead. I mean this guy was buried by EVERYONE. His own family probably disowned him for a little bit, and now? He’s quietly one of our most productive hitters in the whole lineup. Since July 9th Headley is hitting just under .380 with eight multi-hit games. It’s crazy what’ll happen to your conscious when your job security becomes stable. The moment Gleyber Torres went down, there appeared to be a giant weight lifted off his shoulders. With no clear threat to his job, Headley was able to play with a certain calm that has in part revived his season. Now when he comes up in the 6 or 7 spot in the lineup I don’t want to punch something, I’m expecting a base hit. Defensively he’s been everything you could ask for and more. After the trade that brought over Todd Frazier at third, Headley switched to first base. All he’s done there is make scoop after scoop, not recording an error since June 12th. You have to give this guy a ton of credit for grinding all season long and getting to this point. He’s allowed Cashman to focus on adding starting pitching, rather than their first base hole that once was.

We Need To Talk About Luis Severino’s Brilliance

Severino has been the ace, the stopper, the everything for this pitching staff. Every single start he brings his overpowering stuff to the mound and flat out out-duels any pitcher who opposes him. Against the Reds this past week it was light work.

Pairing this man up with a Sonny Gray to pitch Game 1 and 2 of a playoff series is bad news bears for everyone in the MLB. It’s a little concerning that he’s already thrown 50 innings more than any season prior in the big leagues with still two months to go, but I’d imagine there’s a plan to manage this. His 145 strikeouts to just 32 walks is INSANELY GOOD. Severino pitches with a confidence that a season vet ace pitches with, but the best part is that he’s only 23.

There’s a reason the Yankees went after multiple starting pitchers at the trade deadline. There’s a few young guys on the team that have never come close to the innings that they’re currently projected to hit by season’s end. By not only getting Jamie Garcia, but as I’m typing this going after Sonny Gray and Yu Darvish, the Yanks appear headed towards a six man rotation or a scenario where Montgomery heads to the pen as a lefty arm. After a stellar June (4-0 with a 2.59 ERA) the southpaw went 1-2 over six starts in July with a 5.90 ERA. Yesterday was bad, no other way around it. His pitch count soared in the early innings and eventually a blow up third spelled doom for Montgomery’s day. Now with Gray and Garcia’s arrival I’m expecting Monty to be moved to the pen or AAA. He’ll be on the roster in September 100% and probably in the bullpen in October as a lefty weapon.

Yesterday the Yanks acquired veteran lefty Jaime Garcia for Zack Littell and Dietrich Enns. Garcia is crafty and pitches like a poor man’s Tom Glavine. He won’t blow you away with his stuff, but he knows how to pitch. He’s not having the best year, but what he brings to the table is experience. Garcia has pitched in the World Series, and pitched well I might add. In Game 2 of the 2011 Fall Classic, Garcia went seven shutout innings against the stacked Texas Rangers lineup. He’s a big league starting pitcher first and foremost, which Bryan Mitchell, Luis Cessa, and Caleb Smith aren’t. Every fifth day he’ll give you hopefully six innings of three run ball which is all I could ask for from my number five guy. Seeing Littell go hurt a little bit. He was having a great season combined in Single A and Double AA, but it’s a move that had to be made in my mind.

BUCKLE THE FUCK UP. As we turn the page to August, New York welcomes Detroit to town for a three game set. Tonight will be a great pitching matchup of last year’s AL Rookie of the Year Michael Fulmer up against Sevy. For the weekend set, the Bombers travel to Cleveland where the first place Indians await. On Saturday we’re going to be doing another watch party. This time at Gramercy Ale House (22nd St and 3rd Ave). They’ve got some great drink deals going with $3 shots, $4 domestic drafts, and $5 well drinks. The game is at 7:10 PM, but the deals all start at 5:30. Should be a great time and it’s a huge series so I hope to see some of you out there. 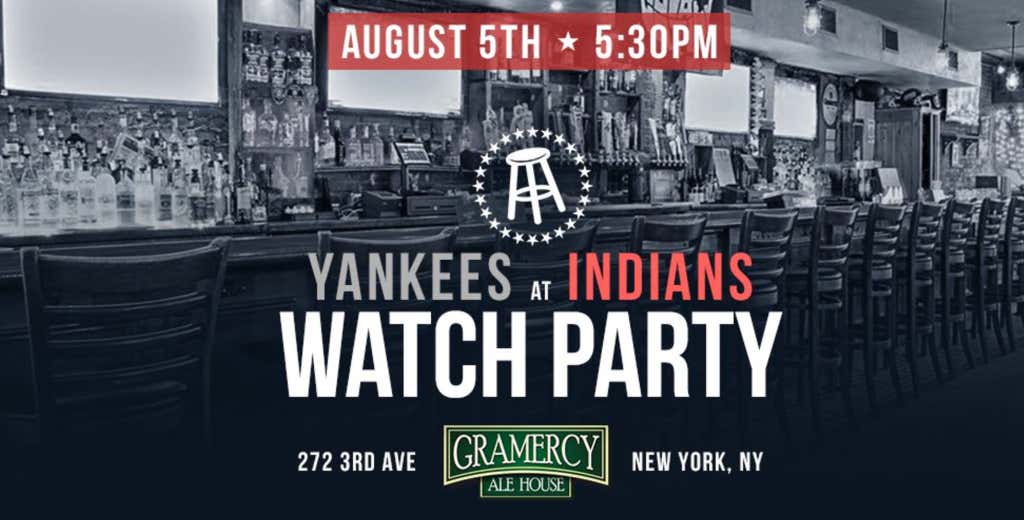 P.S. Give Brian Cashman the biggest extension ever. This fucking guy is unbelievable.