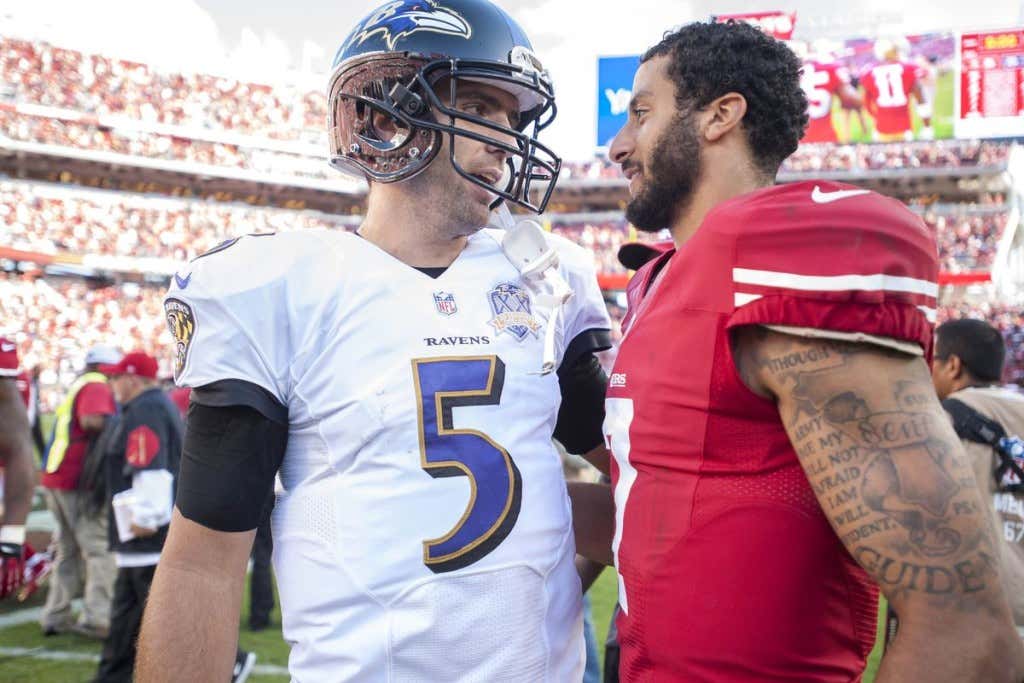 Yesterday the Ravens hosted their first open practice of the year at M&T Bank Stadium. It’s a nice tradition they do a few times every season since moving camp away from McDaniel College a few years back. It’s a great opportunity to connect with the fans, have some fun, and get folks excited about the upcoming season. Included with this open practice was an open Q&A for fans with the front office and even the NFL Commissioner himself. Generally, it’s a pretty cool thing to be able to provide the fans this kind of access and make them feel more connected with the franchise.

However, the Q&A could not have come at much worse of a time. The Kaepernick story is a lightning rod of a national news story, especially when the media is hungry to talk football, but there’s very little actual football to be discussed. So naturally the Kaep conversation dominated the Q&A.

The one thing that the Ravens PR/front office did well with this Q&A is that they definitely came prepared to address the ongoing Kaep situation. Gotta give them credit there, they definitely prepared. The problem is that they prepared for it all wrong. It was a complete and utter disaster. They talked in circles about how much thought they’ve put into all the things that really don’t matter with this decision.

What we’re seeing right now is a massive overcompensation for the failures of the Ray Rice debacle. 3 years ago, the Ravens sheltered themselves in from the opinions of everyone around them, made a football decision based on their belief that Rice still had some left in the tank, and tried to have the story blow over. It was incredibly tone-deaf and absolutely came back to bite them in the ass. They faced tons of backlash and were the butt of all jokes in the sports world. That reputation, which was already a shaky one, has continued to (and will continue to) haunt the franchise for years and years to come.

It’s more than obvious that the Ravens really really want to come across as an open-minded franchise here. They want everyone to know that they’re having thought-provoking conversation and are considering this decision from all angles. And that’s really the problem.

The Kaep situation and the Ray Rice situation are complete apples and oranges. They couldn’t be more different. There’s nothing controversial about punching your fiancé out in an elevator, especially when the evidence is broadcasted out to the world. In that situation, the football aspect is the factor that matters the least, or at least from a PR standpoint. The Ravens based that decision on football and have been paying the price ever since.

Now we have a situation where the Ravens can make a decision that has some social issues tied into it. For months, people have debated whether or not teams are shying away from Kaep because of his stances. They definitely are, but there’s nothing to gain for any team to admit that. Any decision to sign him should be rooted in his ability to play the quarterback position. Or at least that’s how it should be framed from a PR angle.

So why in the hell are the Ravens so hell bent on praising Kaepernick for his football ability? By doing so, they’ve backed themselves into a corner. They’ve thrown themselves right into the middle of a hot button issue, and everyone knows there’s no fence-sitting in 2017. If the football factor isn’t the question, then the question HAS to be the controversy. Now their ultimate decision will give the appearance of falling on one side of the fence or the other. Locally, this will surely alienate a significant portion of the fan base. Nationally, the Ravens are the tone-deaf idiots with their foot in their mouth again. It’s a complete and total PR DISASTER.

Look, I understand the value to having open discussion and being accessible to fans. Fans are the ones who drive the entire existence of professional sports, and giving them a voice in the direction of your franchise is generally a good thing. I truly think that the front office has good intentions here, but their efforts here are wildly misguided. Keeping their cards close to the vest here was 1000% the move, and they did exactly the opposite.

PS: At one point Steve Bisciotti mentioned that he reached out to Ray Lewis for his thoughts on this matter. Again, something that he didn’t need to broadcast, and it’s predictably spiraled into a national story. However, I think ESPN columnist and Baltimore native Kevin Van Valkenburg brought some really interesting perspective via this twitter chain on what Ray Lewis means to Baltimore and why Bisciotti trusts Ray’s opinion.