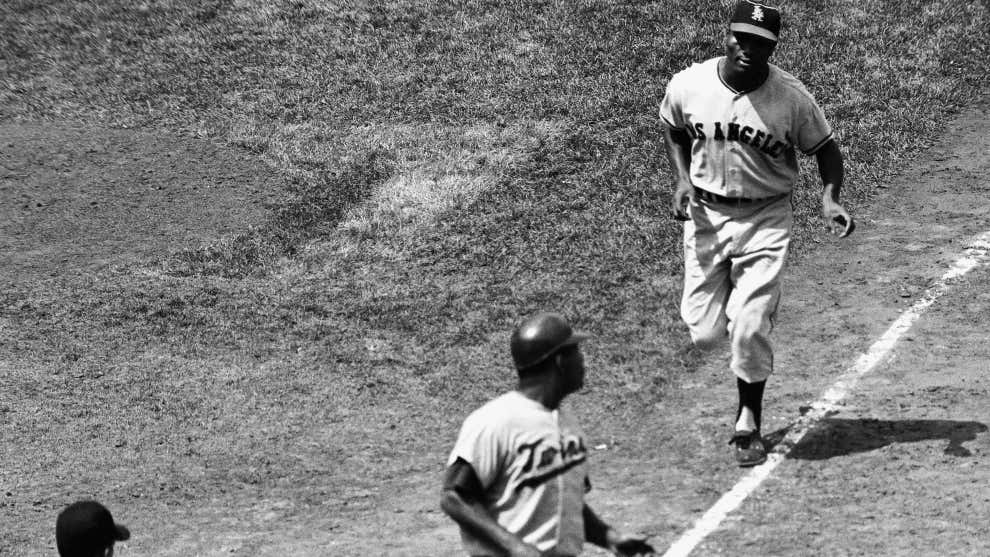 Leon Wagner of the Los Angeles Angels trots home after a home run in the All-Star Game at Wrigley Field.

In the year’s second All-Star Game, the American League snaps a five-game drought to beat the National League 9-4 at Wrigley Field in Chicago. Leon Wagner of the Los Angeles Angels wins the game’s MVP going 3-for-4, with a home run and two RBI. It is the final time that there would be two All-Star Games in the same season, ending an experiment designed to raise more money for the retired player’s pension fund.

Between the years 1959 and 1962, there were two All-Star Games, the reason was to raise more money for the retired player’s pension fund. These games would typically be played a few weeks apart. The exception was in 1960 when they were played two days apart. The first two years of the experiment saw both games hosted by the same league with the 1959 games at Forbes Field in Pittsburgh and the L.A. Memorial Coliseum. In 1960, one was held at Yankee Stadium and the other was in Kansas City’s Municipal Stadium. In 1961 the first game was at Candlestick Park in San Francisco and the second at Fenway Park. In the final year, the first game was held at D.C. Stadium, with the final game at Wrigley Field. In the years of two All-Star Game, the roster of the teams was the same for both games.

Three weeks after the National League beat the American League 3-1 in the first All-Star Game of 1962, the American League extracted some revenge winning at Wrigley Field 9-4. The NL scored first as Dick Groat of the Pittsburgh Pirates singled home Los Angeles Dodgers pitcher Johnny Podres in the second inning. The lead would not last long as Pete Runnels of the Boston Red Sox led off the third inning with a home run. One inning later, Leon Wagner of the Los Angeles Angels hit a two-run homer to give the Americans a 3-1 lead. The American League would eventually build a 7-1 as Tom Tresh of the New York Yankees doubled home Al Kaline of the Detroit Tigers in the sixth with Kaline’s Tigers teammate Rocky Colavito hitting a three-run homer in the seventh. Groat would drive in a second run for the National League in the bottom of the seventh, while Billy Williams of the host Chicago Cubs had a RBI ground out in the eighth. In the ninth inning, the Roger Maris of the Yankees and Colavito drove in the American League’s final two runs, while Johnny Roseboro of the Dodgers homered to close out the scoring.

Following the game, the first ever All-Star Game MVP awards were handed out. Maury Wills of the Los Angeles Dodgers received the Arch Ward MVP, named after the All-Star Game’s founder for the first game, while Leon Wagner of the Los Angeles Angels received it for the second game. The American League’s win prevented the National League from tying the All-Time series record at 16-16-1, but the National League would win 20 of the next 21 games to take control of the series for a generation. Following the 1962 season, owners agreed to give the players a big share of the pot from the All-Star Game, deciding that two All-Star Games was ruining the event and creating too much of an interruption in the season.