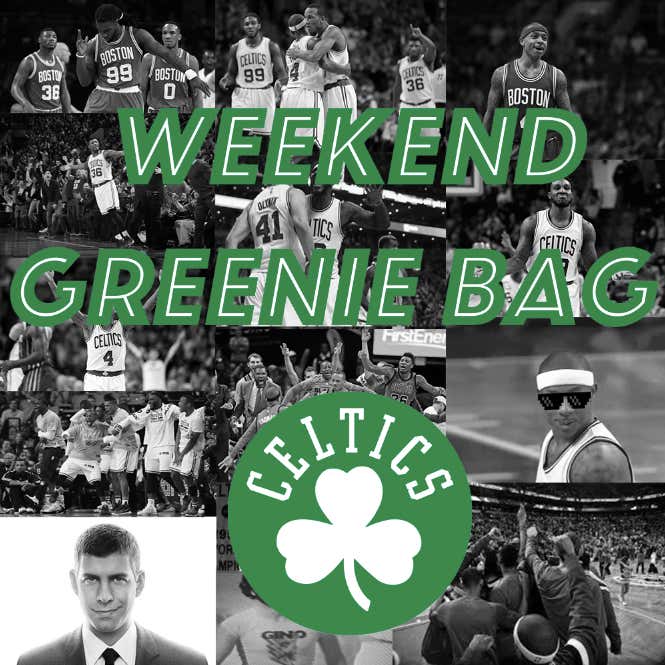 What’s going on everybody, welcome to another weekly edition of the Weekend Greenie Bag. We’re right in the thick of the slow period in the NBA schedule, and as a reminder in addition to this weekly mailbag you can also help dull the pain of this basketball-less period with the 2017 NBA Season Preview Series. So far we’ve gone through Minnesota and Portland, with Sacramento on deck. In terms of this blog, just because there isn’t much going on in the NBA world, that doesn’t mean stoolies don’t have things on their mind which is why this blog exists. Remember, it doesn’t have to just be Celtics stuff (although the majority of submissions still are), it can literally be anything on your mind when it comes to the NBA. Just tweet me with #GreenieBag or email greenieceltsbag@gmail.com. It’s easy and you know you don’t have anything better to do so don’t be shy.

With that said, it’s time for your questions..

No doubt about it Sean, when the Celtics moved Avery Bradley to Detroit, it meant one thing. Terry Rozier is going to have to elevate his play. That may scare some, but allow me to explain why things suggest that given his expanded role and opportunity, he should be able to really help.

Last season, Rozier played around 4x the total minutes he got as a rookie, and while his averages were modest at best, there were signs of what might be on the horizon. For example, from his first year to his second year, his offensive rating went up nearly 20 points (100 vs 81), and his Per 100 possession numbers last year of 16/8.9/5.1/1.8 are certainly encouraging. Obviously those numbers look great, but they don’t do a great job of realistically telling you what to expect, which is something Per 36 numbers do a much better job at. In that category, Rozier last season had averages of 11.7/6.5/3.7/1.3. I think We’d all take that from a second unit player without question. More importantly, His Per 36 turnovers were nearly cut in half last year compared to his rookie year. As expected, the more experience he got, the more he played in control and the results were positive. I would say that’s my biggest takeaway from Terry, is that he feels so much more in control on the court than he did as a rookie. He still can’t run a 2for1, but that’s a different story.

Ideally, I’d like to see him at times be in the backcourt on that second unit with Marcus, something like a Marcus/Terry/Jaylen/Tatum/Zizic lineup would be fun as hell to watch. You can have Rozier run the point or play off the ball in this scenario, and defensively at 6’2 (same height as Avery), you can probably have him guard ones or twos. Here’s the thing though, for Terry to TRULY make a leap in Year 3, a year in which players tend to do it, he needs to improve in two areas in my opinion

1) Finishing at the rim

We all know layups are hard for this team, and Terry might be the worst culprit. It doesn’t make sense to me because in 2K the guy literally dunks everything, but Rozier struggled around the rim last year. He shot 47% at the rim, and just 24% from 3 to <10ft. That’s going to have to improve without question.

As athletic as Rozier is, his shooting percentages still aren’t great. After 27/22% splits as a rookie, he jumped to 36/31% last year in an expanded role, so I would expect that trend to continue to happen this season. I’d love to see him in the 42/36% range this season, because remember that second unit is really going to need scoring this season.

and with Marcus’/Isaiah’s contract situation a factor this summer, it will be interesting to see how ready Rozier is to possibly take over his role if the Celts decide to go in another direction (I don’t think they will).

I predict 20+ minutes a night, with those shooting splits and averages of something like 9.6/3.5/3.5 with about 50 missed layups, a couple monster dunks, and a handful of big moment threes.

You know what Nate, we are quickly approaching the 1 year anniversary of the Weekend Greenie Bag, and of all the blogs I’ve done, all the questions I’ve read, I have not ONCE been as offended as I am right this second. What on God’s green earth is wrong with you? Yes, I have alerted Twitter of this blasphemy so you’ll probably be suspended any second.

Has Tommy lost it? Let me tell you something Nate, name another broadcaster that can ejaculate on air and not skip a beat?

You’re trying to tell me that man has lost something off his fastball? Absolutely not. In fact, I’d say Tommy was as electric as ever this past season. Sure he may be 82 years old, but it’s a young 82. And make no mistake about it, you don’t tell Tommy when it’s time to hang it up, Tommy tells you when he’s done.

A gigantic part of why the Celtics are so fun to watch is watching the game through Tommy’s grunts, outrageous comparisons, anger and excitement. He’s one of the most important Celtics of all time, and his partnership with Mike Gorman for what has been my entire life is not something I want to end any time soon. If I’m the Cs I throw piles of money at him so he just never walks away because make no mistake it will never be as good as Mike and Tommy again.

But that’s not to say Scal isn’t ready. Some people aren’t a fan, but I’m 100% Team Scal. He in a way is what I imagine Tommy was like when he first started called Celtics games in 1981. Scal knows basketball, and much like Tommy works that well into his commentary. Just because he’s optimistic more often than not about the Celtics, again like Tommy he’ll say it when they are playing like shit. Sure he may not have 8 championships as a player and 2 more as a coach with a record of 427–263, but I’m pretty sure he was the Finals MVP in 2008 so that counts for something

In the meantime he’s the go to guy on the road, and who I would want to take over once Tommy finally does walk away. I am just in no rush to have that happen, and you shouldn’t be either.

What do you reason for Tatum’s Rookie averages (PPG, RBG, APG)? Also, any guess about how much he’s actually going to play?

My guess? 20ish minutes per game 10.4 points 4.8 rebounds 1.2 assists. I think it’s important that people understand first and foremost, if he doesn’t defend at an acceptable level, he won’t play. But let’s say he does, he’s probably the second or third option, so realistically his FGA numbers won’t be crazy, at least to start. In a dream world he comes right in, gets 25+ minutes takes like 14 shots a game and averages like 14+ points a game. That very well could happen, I just think that while some of the things we saw in Summer League will translate, there’s still a gigantic difference in doing those things against real NBA defenders.

He won’t have the box scores of those drafted around him, but much like Jaylen that’s because he plays on a team that is actually good that has real talent.

Charlie, I’ve said my piece on this issue. I don’t really know how else to say it. To be honest this isn’t even a new debate, people have been talking about who is better between these two for years

Greenie, I think its obvious that most of the actual roster spots are safe, with the exception of Shane Larkin. But there are only so many minutes to go around. Curious to see what you think the most compelling position based camp battles are. Most glaring to me is the front court. Besides Horford who is an obvious starter/finisher, you have Baynes, Crowder, Morris, and Brown competing to get heavy minutes, plus Zizic, Tatum and Semi looking to crack the rotation. I’m also curious to see how the guard rotation shakes out between Marcus and Terry. Can Terry make a leap to the point where the team doesn’t match any kind of offers that might come to Marcus next off season, or does Marcus improve his shooting to a point where Terry might be trade bait during the year? I like both players but assuming we back up the brinks truck for IT, the team isn’t going to invest big dollars into 2 guys who will be coming off the bench.  – Paul in Somerville

I’m with you Paul, I am fascinated by the front court competition. How does a team go from having absolutely zero front court options to suddenly having too many? You didn’t even mention Daniel Theis! The good news to take away from all this is that the Celtics have addressed a glaring issue from last season. Yes they addressed it with players that are gigantic question marks, but I bet it’ll be better than last year almost by default. When you think about it, having guys like Yabu and Semi, two physical monsters, as guys who might be outside your top 10 rotations is quite the luxury. This team loves lineup flexibility more than you love your own mother, and that’s what this roster gives them. They can go big, they can go super small, they can play normal small ball, they are loaded with players who can matchup at two/three positions, which is the exact direction the NBA is heading.

My guess would be initially Brad relies on the guys who actually have NBA experience. That means Baynes/Morris will obviously play more. The question for me is what happens with all the “rookies”. Zizic clearly is who I would want at the five on the second unit, but if Morris is already at the four, what does that mean for Yabu/Theis minutes? I feel like this is going to be a season long thing, with Brad running with different rotations at different stages of the season. We may see a record with total lineups in the 2017-18 season, wouldn’t shock me one bit.

And that’ll do it for this week, thank to those who wrote in, and don’t forget the Greenie Bag is open 24/7. You have a thought/take/question I immediately want to hear about it. See everyone same place same time next week.