And so it becomes official. One of the cornerstones of the Bradichick Dynasty Part II announces he’s calling it quits after 11 seasons in the NFL. Not that it’s been a secret. Just before the start of camp I’d heard to expect something within a few days and like I wrote Thursday, when he didn’t report for practice to a team that doesn’t do the “veteran day off” thing, you didn’t have to be John Nash to connect the dots.

As far as his legacy goes, he’s probably earned a spot in the Patriots Hall of Fame. At least once the best of the 3-Ring Club members from Bradichick Dynasty Part I get in. And Vince Wilfork. But with or without induction, he’ll go down in history of one of those classic Belichick discoveries.

Drafted out of Purdue by New Orleans in the 5th round (135th overall) in 2006, Ninkovich ended up going to Miami for two seasons. And in those three years combined played in a total of eight games, primarily as a long snapper and was cut four times. The Pats signed him in ’09 and he ended up playing 140 games for them over the next eight seasons. With 17 of those in the postseason, including three Super Bowls and two championships.

I always struggled not to draw the obvious comparison between Ninkovich and Mike Vrabel. But I forgive myself. Both because I really love me and because how can you not see the similarities? Ninkovich replaced Vrabel at the Pats’ left defensive end. They both wore No. 50. They were lured from rosters of other teams that weren’t utilizing them and fit perfectly into the Pats’ scheme. Both made big plays at critical moments. None bigger than Ninkovich’s clutch sack of Russell Wilson in Super Bowl XLIX. With the Pats down 10 and 13 minutes to go, Seattle had a 3rd & 7 from their 39 and a couple of first downs away from bleeding the clock down to nothing. But he forced a punt, the Patriots had time for two more drives and scored touchdowns on both of them.

Aside from Vrabel’s 10 career touchdown receptions and one more ring, they were practically the same player. Primarily because of two other things they shared: Toughness and dependability. The only time Ninkovich missed in his eight seasons in New England were the four games he was suspended last year for unapproved supplements from overseas. Given the position he plays, that kind of durability is almost unheard of. Especially for the oldest player on his roster outside of Tom Brady.

Given his age, I assumed we’d see one last season out of him, probably with a reduced role to keep him fresh for a final postseason run. But for whatever reason, he and the team worked it out this way. What it means going forward for the Patriots, we’ll soon find out. But it instantly makes edge the biggest question mark on the roster. And if Kony Ealy is less like the guy who had 3.0 sacks and an interception in Super Bowl 50 and more like the guy Carolina gave up on, it’ll unquestionably be the thinnest. Not to mention whatever indefinable leadership he brought to the locker room.

But as I said the other day, Father Time is still undefeated. Still, when you go from a mid-round draft pick who can’t get playing time to a decade plus of success being an integral part of a two-time Super Bowl champion, you win at life.

Farewell to a fan favorite and my close, personal friend that I met that one time. Farewell and thanks. 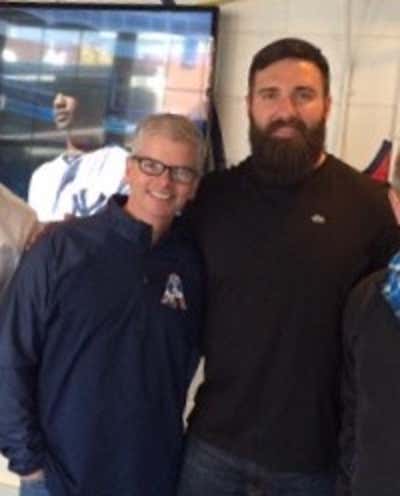