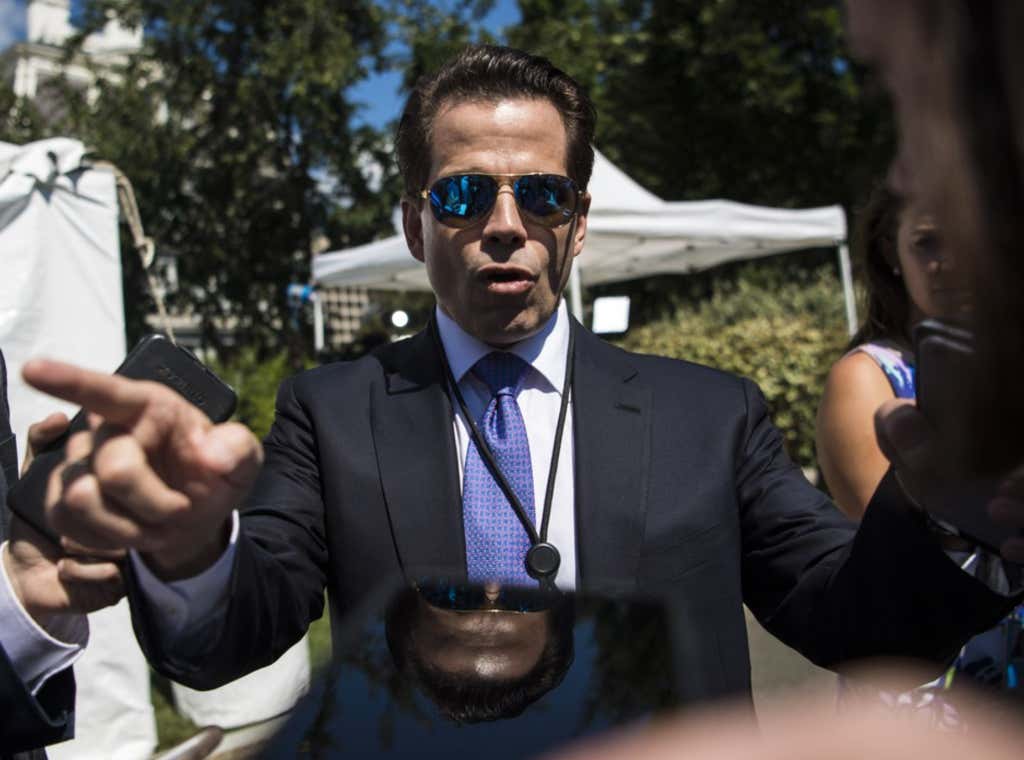 First and foremost, he’s obviously a piece of shit. That’s not really up for debate or anything like that. Anthony Scaramucci is what a line of coke would do if it could walk and talk, he’s the kind of guy who would walk into a Sopranos casting call with no training and no practice but say, “Eh, I’m from Long Island and I eat dinner at my nonna’s house on Sunday nights… of course I’m gonna get the role.” He’s every guy you’ve seen at a bar, aggressively hitting on a woman, and thought, “Jesus Christ, what a fucking asshole.”

Having said that, I LOVE the Mooch. If you haven’t seen his interview/call with The New Yorker then it’s an absolute must read. I don’t know if Barstool has ever dropped a “Must Read” rather than a “Must Watch” on you, but I’m here to do it. Why do I say that? Oh, I don’t know, maybe because he drops about 100 of the best quotes ever in a single call. Granted, that call wasn’t supposed to have an article written about it and *maybe* it’s not the best idea to have a director of communications who doesn’t know that he has to tell reporters that shit is off the record, but it was still amazing. How amazing, you ask? I’ll tell you. Scaramucci said…

1. “I want to fucking kill all the leakers.”

Casual murder drop. Anyone who says shit he doesn’t like is going to fucking die. You tell the press that I was eating dinner? Guess what, I’m cutting your throat, bitch. ISIS style. Allahu akbar!

He threatened to fire everybody. EVERY. BODY. The whole communications staff. You know what the worst part of this was? Ryan Lizza, the New Yorker reporter he called, literally laughed in his phone face at this. Can you imagine how emasculating that is? You say you’re gonna fire everyone and the dude just fucking lols at you? Jim got more respect from the Dunder Mifflin staff when he threatened to fire Ryan.

3. Reince Priebus is a “paranoid schizophrenic, a paranoiac.”

What was Reince paranoid about? Idk, getting fired or something? The fact that Scaramucci is out to get him after Priebus prevented his hiring for 6 months? Something like that. Anyway, the best part of this came when the Mooch ended it with “I gotta go tweet some shit to make this guy crazy.” He really did that. He said he’s a paranoiac the said he had to go tweet some shit to fuck with Priebus’ mind. That’s some shit the worst girlfriend of all time would do. “Yeah he’s so jealous and controlling, he thinks I’m always fucking around, it’s so annoying… hang on, gonna go pretend I’m at the club on SnapChat just to work him into a tizzy.” Ruthless.

This is pretty self-explanatory, it’s amazing. It’s horrible, but it’s amazing. This sentence is a Lemon Party of words: it’s horrible and disgusting and innocence-robbing, yet I can’t stop reading it. Steve Bannon sucking his own cock! I don’t want to think about it but I can’t stop thinking about it. Get in there like Marilyn Manson, you grotesque Nazi! Suck that dick!

Saving the best for last here and by best I really mean it, because this might be my favorite quote of all time. Me, Chaps, and Louis drove up to Newport last night and in three hours in the car we might’ve said this 100 times, then laughed until we had tears in our eyes each time. Anthony Scaramucci, The Mooch, refers to himself as The Mooch when talking to reporters. That is AMAZING.

I don’t know if you guys remember a little film called Varsity Blues, but Jonathan Moxin refers to himself as “Mox” in an interview and his girlfriend calls him a fucking asshole. A movie had a scene about a high school quarterback in Texas being a big enough dick to refer to himself as his nickname and the scriptwriters thought, “Ok, we gotta real that one in a bit,” but the real life White House communications director does not share that sentiment. That’s the greatest thing that’s ever happened to me. I’m serious. This quote is the best thing that’s ever happened to John Feitelberg in his entire life.

Anthony Scaramucci may be Ben Stiller playing the role of Italian asshole. He may wear Oakley sunglasses. He may be destroying to White House from within. But, goddammit, I can’t get enough of this guy. I need more Mooch.