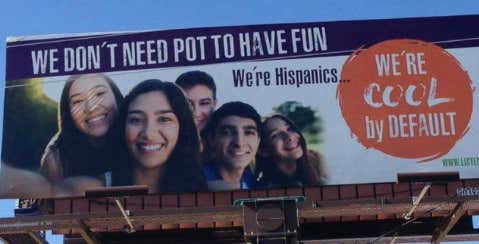 Source –  An anti-marijuana billboard in Washington state upset some and confused many for featuring a group of young Latinos next to the message: “We don’t need pot to have fun. We’re Hispanics… We’re cool by default.”

On Tuesday, reporter Mike Faulk of the St. Louis Post-Dispatch posted a photo of the billboard on Twitter. While some Twitter users called the sign “totally inappropriate” and “tone-deaf,” others found the billboard amusing.

The billboard is part of the Washington State Department of Health’s statewide prevention campaign that seeks to dissuade teens from using marijuana, according to The Associated Press. The government agency promised to remove the sign and apologized via Twitter.

The billboard was “extensively tested” among Hispanics living in the Yakima Valley, they said. “At no point during our testing did we hear any feedback that indicated this message may offend anyone,” the spokesperson told Vox. “Actually, we were excited to learn youth found this message empowering and most felt a sense of heightened pride in their Hispanic heritage. We certainly don’t want to offend people, and our overall goal is to be effective in reaching specific people with information that resonates with.

Let me get this straight- the government put up a billboard calling Hispanics cool. Hispanics were okay with it. Hispanic youth felt empowered by it. Now they’re taking it down? Makes sense. One of two things is going on here. Either the wacky tabacky’s gone to their head or someone’s jealous. My money’s on the latter. I’m looking at you, white people. “Tone deaf” and “totally inappropriate” are some jealous Caucasian vernacular. Might as well have tweeted “if I’m not cool neither are you.” Not a good look. Especially considering white people will never be cooler than hispanics. We’ll never be cooler than anyone. We’re a lame people; vanilla in both pigment and life. The term snowflake gets tossed around a lot but it applies to this situation. Deeming a poster “racially insensitive” when the race in question says it’s not is pretty bad.

It’s a shame the Washington State Department decided to take the poster down. All because Mike Faulk of the St. Louis Post-Dispatch decided to tweet a picture to the masses. Idiot. I was looking forward to the other races posters. Whites, Asains, Blacks, Indians for Christ sakes. It would’ve been great. A highway roast, if you will. It’s not all bad though, it did make me think of this.