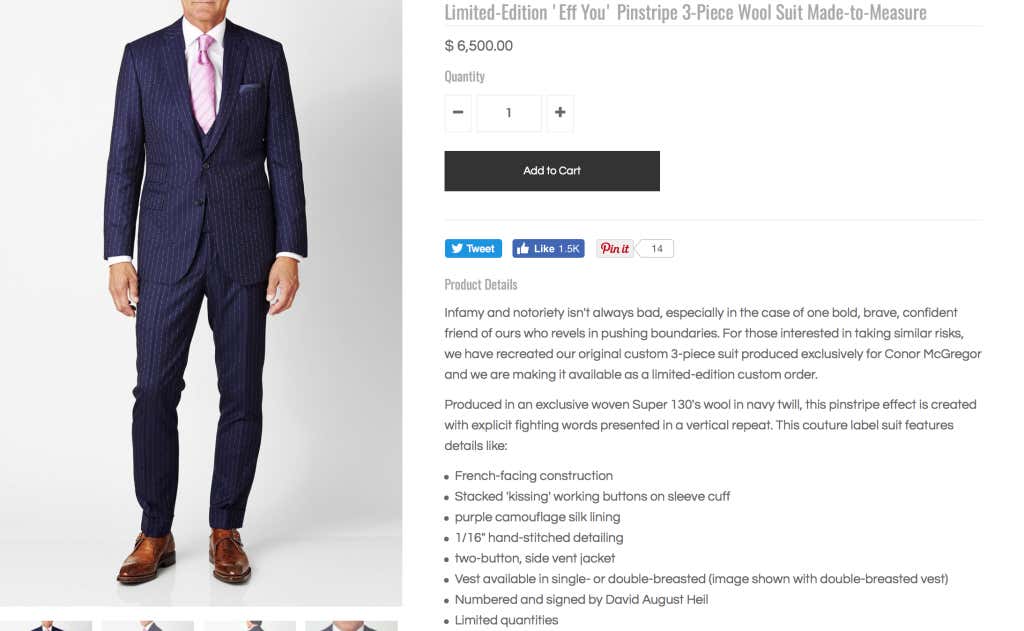 Was this suit awesome when McGregor wore it at his Mayweather press conference? I’ll answer that, yes. It was. It was very, very awesome. But here, let me list all of the people on planet earth who can pull this suit off:

That’s it. That’s the beginning and end of the list. Out of 7 some odd billion people who are alive right now there is a single man who can rock this look. Sure, it looks cool online and it’s funny to laugh at for a second, but much like one of those Spencer’s Gifts shirts that say “The Man” with an arrow pointing to your face and “The Legend” with an arrow pointing to your dick, you’re a fucking asshole if you wear it in public.

If you ask me this suit should be a Jos A Bank type deal where if you buy a real suit from David August you get one of these thrown in to wear to your next theme party or to dress up as McGregor for Halloween. But, as far as business goes, I guess it’s not the worst play to slap a Gob Bluth price tag on it? Because you know there are some power suit, power tie assholes on Wall Street who are gonna buy this and think they’re the coolest people on earth. Todd from accounting is never gonna have the delusional sense of self-confidence to think he can pull this off but Barron over at Goldman will buy this and think he’s the coolest guy who’s ever existed.

Don’t be a Barron.