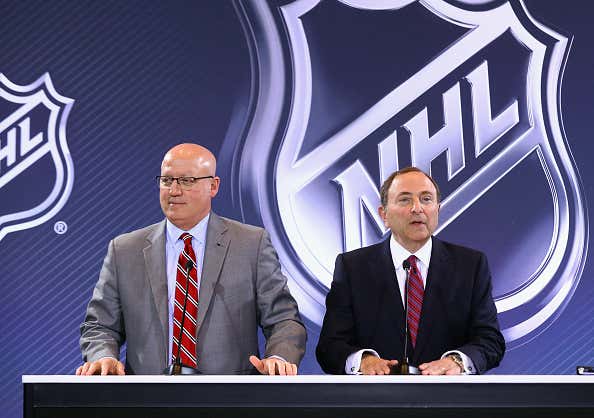 THN – NHL deputy commissioner Bill Daly went on the record with THN saying NHL players are not going to the 2018 Olympics, and Hockey Canada announcing team building plans should cement that idea…

…First things first. A tiny, miniscule sliver of hope of the NHL participating emerged last week with a report that Russian players were telling people there was a backup NHL schedule for this season that included a window for competition in Pyeongchang. There’s been talk that NBC has been pressuring the league to send its players, and that game times haven’t been revealed yet because there is still some maneuvering being done to get the games played at a more reasonable hour in North America, which would be a far less reasonable hour in South Korea…

…“I’m happy to be on the record,” NHL deputy commissioner Bill Daly said in an email to THN.com. “There is not an alternative schedule. Having NHL Players participate in the 2018 Winter Olympic Games is not an available option. All of the international federations are planning appropriately for constructing teams that will not include NHL players. I anticipate there will be federation announcements in the coming days that should eliminate any and all continuing doubt or skepticism about the issue.”

It’s been said at least 3 or 4 different times already before that NHL players will not be participating in the 2018 Winter Games. But every single time Bill Daly or Gary Bettman say the NHL isn’t going to Pyeongchang, it’s immediately followed up with a “yeah but mayyyyyyyybe….”. So lately the talk has been that there’s still hope because the NHL already has an alternate schedule planned out just in case they do have to cave and let their players go to the Olympics. As if the NHL is competent enough to come up with not only 1, but 2 working schedules for the league next season. Sorry but for a league who is currently trying to grow the game in China while simultaneously sitting out the Olympics in South Korea, I wouldn’t trust these guys to be able to walk while chewing gum at the same time. Let alone come up with two separate working schedules.

So that rumor was shot down by Bill Daly but I’m sure he’ll still have at least 5 or 6 more rumors to shoot down over the next 6 months. I don’t think people will fully believe them until the Olympics officially start and there’s a bunch of college kids playing for Team USA. Which–as I’ve said in the past–wouldn’t be the worst thing in the world.

Obviously I’d rather watch Team USA stacked with guys like Patrick Kane, Jack Eichel, Auston Matthews and Johnny Gaudreau. But there’s so much young American talent out there right now that they can afford to wait for the 2022 Games. The last thing I need to watch is Canada win their 3rd straight Gold Medal with Crosby as the captain. I’m so sick and tired of hearing about what a great hockey team the Canadians have. Screw ‘em. The Russians can have all their pros play, hopefully they steal Ovechkin away so the Caps have to play without him for 2 weeks, the rest of the world has a mix of minor and junior and college players, everybody still gets to wake up at 7 in the morning to watch international hockey and then USA gets ready for gold in 2022. I feel like I’m going to get excommunicated by the hockey community for not caring if the NHL is in or out of the Olympics this year but it’s just really not that big of a deal. Sure, you want to see the best in the world compete against the best in the world. But we already see that for 82 games per season + the playoffs. Just give me any level of international hockey to watch and I’m set.