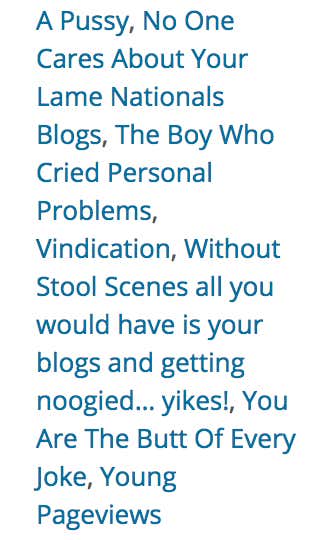 Here’s a little behind-the-scenes look at what is supposed to be a behind-the-scenes look of Barstool (Stool Scenes). Our blogging portal–the “back end” as the cool bloggers refer to it–has a place where we insert key words. This allows for people to find stories they like. If you search “Mets,” you’ll find a trove of KFC and Frankie Midnight blogs, while if you search “death,” a lot of my blogs come up. Most of the bloggers kinda mail it in when we do this. I’ll add 3-4 keywords for each blog, which is pretty standard (for this blog: SFW, Nate, Young Pageviews, Stool Scenes).

As such, I was confused when I opened the portal this morning to find an absolute LEVIATHAN of keywords under YP’s director’s cut of Stool Scenes. I couldn’t imagine that he was pushing for some Herculean search-engine optimization effort. After all, Stool Scenes is the number 1 video of the week each week; does it really need more visibility? For sure not! So I started reading, and holy moly!!! Can you say triggered?

This whole situation is the PERFECT example of how things go down here at Barstool. I watched Nate push YP over that box* (allegedly) and thought Nate was going to punch him in the face. When he didn’t, I thought it wasn’t that big of a deal. No harm no foul. Maybe a slight overreaction from Nate but given that I threatened to bomb the office last week, I could relate. But then Dave gets wind of it, spins it to the moon, and the whole thing turns into a monster of an entirely different order. The office is full of sharks; when someone smells blood, the bloggers swarm. And who is the first guy on the scene every single time? YP.

Now, to YP’s credit, that’s his job. He is obligated to capture all the tomfoolery around the office. I do think he’s become a master of inflating some of these conflicts; he knows exactly what buttons to press to maximize each and every flare up. I also know he relishes making other people look bad. The stupider we look, the better his content. As we know, I have pretty thin skin, so this wears on me. I really try to stay out of the unflattering spotlight of Stool Scenes, but sometimes, you have no choice but to ask a Sports Illustrated swimsuit model to go boxing with you/Robbie Fox gets your goat by congratulating you for sex. And when YP has that camera in your face as you’re having a total meltdown, it’s really hard not to hold it against him–even though it’s not his fault.

BUT. When the tables have turned… oh my goodness. I was honestly gleeful when I saw this slew of vitriolic “keywords” from YP this morning. Just a rant for the ages. So much hate hate hate! He showed ALL of his cards here. He’ll probably try to say this was a joke, but given that he probably didn’t think anyone would see this outside of the office, it’s 100% real. Some of the thoughts are gold: “the boy who cried personal problems” is an A+ insult. Also, throwing the “featured” tag in there as an ACTUAL keyword is laugh out loud funny because even in the middle of the tirade, he remembered to make this a featured video.

With that said, to come at Nate in the KEYWORD column on our portal is one of the most preposterous ways to attack someone I’ve ever seen. The most passive-aggressive shit on earth. This is the method of a man who knows the scoreboard is not in his favor; it’s a chop block to a lineman with a history of knee problems when your team is down 48-0 in the 4th quarter. Luckily, the referees saw it and we’re throwing it on the big board for the crowd to judge.

Have at it, you jackals! #GoNateGo