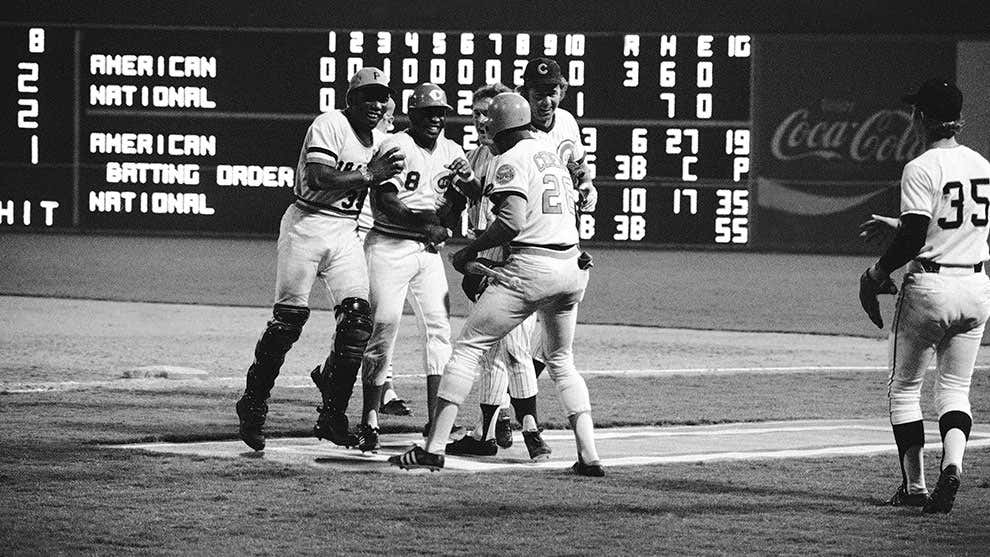 Members of the National League surround Joe Morgan of the Cincinnati Reds after delivering the winning hit in the 1972 All-Star Game in Atlanta.

The All-Stars come to Dixie as Fulton County Stadium plays host the Mid-Summer Classic. Hank Aaron gives Atlanta Braves fans something to cheer with a two-run blast in the sixth inning. The National League would win the game 4-3 in ten innings. Joe Morgan of the Cincinnati Reds who delivered the game winning hit in the tenth inning would be named the game’s MVP.

It was an era of dominance for the National League in the All-Star Game. A year before the American League, snapped an eight-game losing streak by winning a slugfest in Detroit 6-4. Pitching was in control early in Atlanta as both starters Jim Palmer of the Baltimore Orioles and Bob Gibson of the St. Louis Cardinals allowed just one hit. In the third inning, Steve Blass of the Pittsburgh Pirates would walk Detroit Tigers Catcher Bill Freehan, after Palmer had a successful sacrifice, Rod Carew delivered an RBI single to give the American League a 1-0 lead. The National League would not answer until the sixth inning when Cesar Cedeno of the Houston Astros started a two-out rally against Cleveland Indians hurler Gaylord Perry. The next batter was Hank Aaron who brought the fans in Atlanta to its feet with a two-run blast to give the National League a 2-1 lead. The AL would answer in the eighth inning, with a home run nearly as dramatic as Cookie Rojas of the Kansas City Royals gave the AL a 3-2 lead, with a two-run shot off Montreal Expos pitcher Bill Stoneman, bringing home Carlton Fisk of the Boston Red Sox who singled two hitters earlier. In the ninth inning with a 3-2 lead, the American League sent Wilbur Wood of the Chicago White Sox to close the game. However, Billy Williams of the Chicago Cubs and Manny Sanguillen of the Pittsburgh Pirates led off with back-to-back singles. Williams would score the tying run as Lee May of the Astros grounded out to short. The American League went down in order in the top of the tenth inning as Tug McGraw of the New York Mets was flawless. In the bottom of the inning the Orioles Dave McNally came on to pitch for the American League, walking Nate Colbert of the San Diego Padres to start things off. After Chris Spiere of the Giants bunted Colbert to third, Joe Morgan of the Cincinnati Reds delivered the walk off single to earn the All-Star Game MVP.