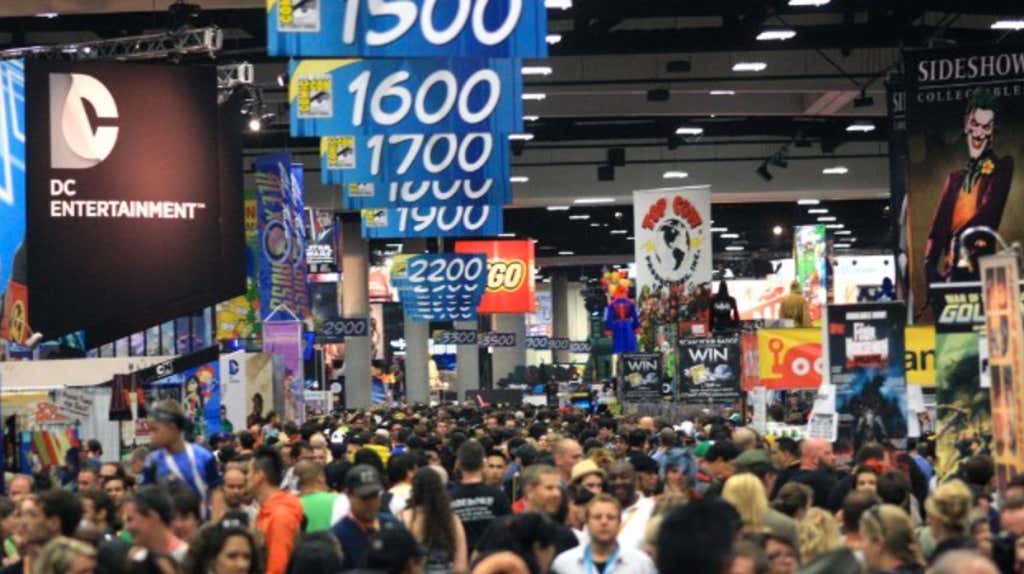 This past weekend was San Diego Comic Con, which always provides nerds with the best few days of our year. Clem and I really wanted to reunite and create some content but we were denied credentials. If I had to guess, they saw “Sports” in our application and didn’t even open the folder. Fear not, though, because now I’m here to rank the three superhero movie trailers that premiered.

I think posting this video online might be illegal, so just keep this between us. Some brave soul dared to leave his phone on video mode while they played the trailer in Hall H, and while the angle isn’t fantastic, we must commend him. I know we can only see 3/4 of the screen, but this is still #1 in my book, and it almost pains me to say that. I love Marvel movies, but I’m a DC guy through and through, and wish I could say Justice League stole Comic Con. It just didn’t. They released their trailer publicly in crystal clear 1080p and it STILL didn’t get the buzz that this potato cam footage did. I think part of that is the fact that many would say DC is 1 for 4 on movies, and I’d say Marvel is 11 for 16. We’re pretty much certain that Infinity War is going to kick some major ass, and it’ll be the first time we ever see the Guardians of the Galaxy on screen with The Avengers, so we’re all just nerdgasming all over the place. It’s giving me the feeling in my little geeky stomach that the original Avengers did. Star power for YEARS. This is gonna be the biggest movie (other than Star Wars) you could imagine, and the theaters will be cheering and crying and the whole nine. Can’t wait to hear the witty interactions between the Guardians and Spider-Man.

Also, who do we think Thanos is gonna kill? He’s gotta kill someone being this is a two part movie (Kill Bill style). First one ends with the mourning of a loved one, second one is the motherfucking vengeance world tour. I waaaaant someone major to die because Marvel needs to show some balls with a death, but all of their characters are so damn likable. So I really don’t know. I could see someone big like Cap or Iron Man eating it, but if I had to pick one, it’s Hulk. Sorry Bruce.

YEEEEEEAAAAAAAAHHHHHHHHHH! HUGE fan of this trailer. It’s my favorite one, despite it being #2 (I’m an unbiased reporter nbd kbd). Looks like they’ve learned a thing or two about not giving away too many spoilers, too. I wouldn’t call myself a Batman v Superman DEFENDER, because I’ll openly acknowledge it’s flaws, but I’m a big fan of it. It’s mostly based on a book called The Dark Knight Returns, which is my favorite comic of all time, so that helps, but a few things in the movie were great no matter who you are:

In Justice League, we’re getting all of that, with Aquaman, Cyborg, and The Flash added to the equation, and based on the trailers, we’re also getting some comedy. All of the ingredients are there, now they just have to put them together. The villain in this movie is someone by the name of Steppenwolf, and he’s pretty badass. He killed Wonder Woman in the comics and also appeared in a deleted scene of Batman v Superman:

Two final things about this trailer.

1. I don’t think Alfred is talking to Superman at the end. That’d be too obvious. I think it’s the Green goddamn Lantern. Let’s gooooooo!

P.S. Come back to this blog on November 18th when you’re saying “Who would’ve thought AQUAMAN stole the show in the Justice League movie?!” Bob. That’s who. Aquaman is a fucking badass and I will fight anyone who says otherwise.

Now Thor got the short end of the stick here, but don’t think this trailer is anything less than phenomenal. I wasn’t a fan of the first Thor, thought it was one of the more boring superhero movies ever, but dug the shit out of the second one. This definitely looks way more like the second than the first, and has a VERY big Guardians vibe with the bright colors and throwback music. Adding Hulk to this is very smart as well, it’ll be like Spider-Man and Iron Man in Homecoming, helping really cement this universe.

That’s it for me, but also check out this trailer for Steven Spielberg’s “Ready Player One”. It looks like some kind of live action Wreck It Ralph in terms of all pop culture coming together in a video game world, and I can’t wait. Thanks folks.