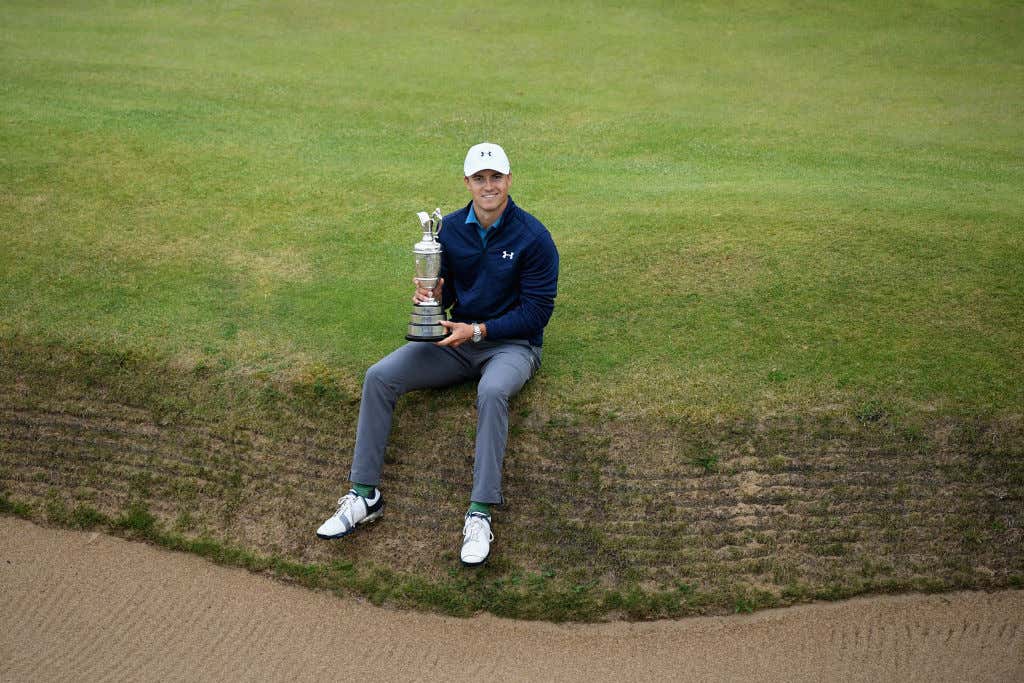 Yesterday, Jordan Spieth of course won The Open Championship. He did it in awesome fashion, stumbling his way through the first 13 holes before playing the last 5 holes in 5-under to win by 3, the greatest closing 5-hole stretch in a major since we started tracking hole-by-hole 20 years ago.

Sad for Kuch but awesome for just about everyone else. Spieth now has 11 PGA Tour wins, 3 majors, and is 1 PGA Championship away from the career grand slam.

If he wins next month at Quail Hollow, he’ll be the youngest player in history to complete the slam. He’s on a very similar pace to Tiger in terms of wins and majors, based on age, although Tiger — at about the same age — would soon embark on the 1999-2001 tear that produced 22 Tour wins and 5 majors in what most consider the greatest stretch of golf ever played.

Everyone loves to focus on these comparisons, and it’s understandable why. We watch sports to witness greatness, and we want that greatness to have context in the game’s overall history. Whether it’s discussing the greatest NFL quarterback, or the greatest NBA dynasty, or the greatest Major League slugger, we need context to do so. These comparisons give us the context we desire. In this context, 23-year-old Jordan Spieth is among the most accomplished 23-year-olds in the history of golf.

What we often lose in these comparisons is the context of the era. Of the generation. Upon entering the scene, Tiger Woods was the only player like Tiger Woods. He was basically the first and only golfer treating professional golf like other elite athletes treated professional sports: he was lifting, running, talking about “reps,” wearing Nike. This put him in a category of his own and, when he delivered inside the ropes, that further solidified the boundaries separating that category.

Nowadays, most players treat golf like Tiger Woods treated golf. Spieth is one among many of those players, and that generational context has lumped him in with Rory, DJ, Day as the younger guys consistently high in the world golf rankings with major victories (DJ’s 33 but, historically speaking, he’s just reaching a golfer’s prime).

The separation is Jordan Spieth. People love to theorize that, if all players are playing their best, Rory and DJ have the advantage over Spieth because of distance. Yes they hit it longer, and generally straighter, but Spieth separates himself by excelling at the most lethal combination of the game: iron play and putting.

Spieth is currently the best iron player on the planet (no. 1 on Tour in strokes gained on approach).

When you hit the ball closer than everyone else and putt as well as anyone else — often better — you’re going to be tough to beat. He’s not a great driver of the ball but the 2 greatest players of the previous generation, Tiger and Phil, weren’t either.

The 2013 John Deere Classic as a 19-year-old. He holed this to get into a playoff, ultimately earning his first win.

And the entire final round of the 2015 Masters.

What I believe about the current crop of players and how the game’s best young guns stack up is this: Yes, the fields are more full of guys that can win any given week than they’ve ever been, but the number that can win major championships still remains relatively low. Spieth knows this and, when push comes to shove, it gives him that separation down the stretch… and will continue to do so.

How good is Jordan Spieth? Really fucking good. In my opinion, the most promising major championship winner since Tiger.