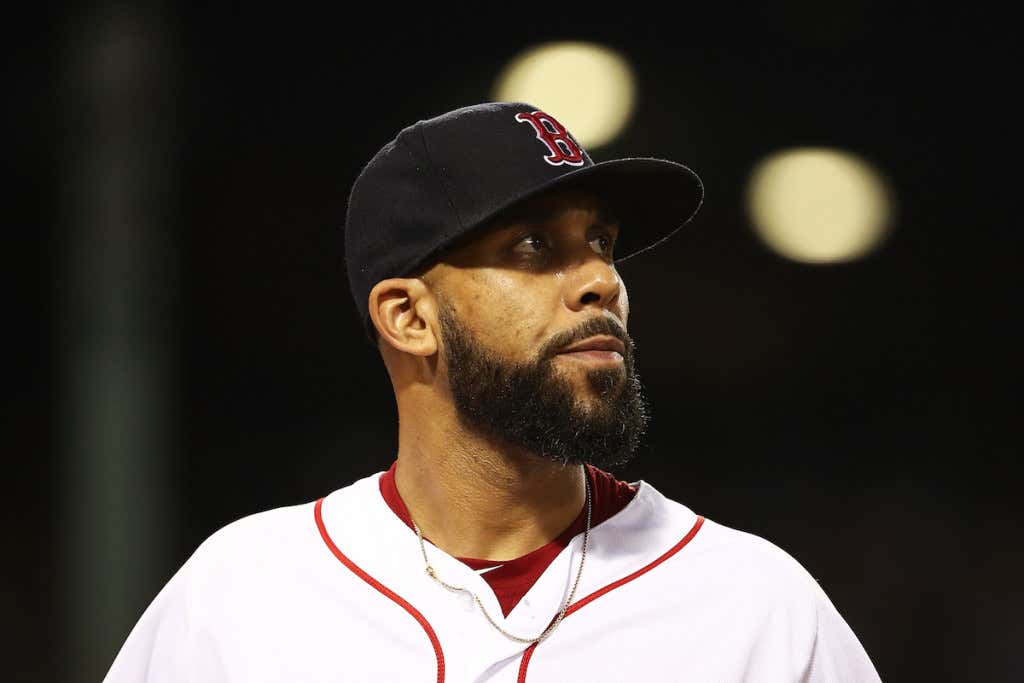 At the end of last month, from seemingly out of nowhere, we learned that David Price “verbally confronted” Hall of Famer and NESN analyst Dennis Eckersley on a team flight, although we didn’t get a whole lot of information up front:

John Farrell, Dave Dombrowski, and David Price met before Friday night’s game over an incident in which Price verbally confronted NESN analyst Dennis Eckersley on the team flight from Boston to Toronto after Thursday night’s game. Farrell confirmed the meeting but wouldn’t elaborate, indicating “it’s being handled internally.” The Red Sox manager also confirmed that Price would make his next start, but there was no indication what possible disciplinary action, if any, took place.

Price was one of many who indicated he didn’t want to speak on the matter. When asked if the situation was settled and over with, Price answered “Yes.” When pressed for more details, he said, “Some people just don’t understand how hard this game is.”

Eckersley, now a NESN analyst, was asked about the incident before Friday’s game, but would not comment. A similar no comment came from Dombrowski and team president Sam Kennedy. What was known was the team was disturbed by the second such incident between Price and a media member.

At the time that the story dropped, we didn’t know what was said, who said what, what the confrontation was about, the tone of the conversation — pretty much we were in the dark on everything. And when you hear about a “verbal confrontation” without hearing any of the details, you probably assume the worst because that’s human nature. Me personally, regardless of how bad it actually was, I knew that Price was likely going to come out of this looking pretty bad. How did I know that? Pretty simple, actually. Because it was Eckersley who he was confronting.

I’m not saying that Eckersley is perfect or that he’s a man who makes no mistakes. Nobody on planet earth fits that description. But in this particular case, you have a player who’s upset with a broadcaster, so we can assume what? That broadcaster said something on the air that upset the player. Okay, well name ONE time that Eckersley ever said something on the air, and your reaction was like, “Eh…that seems a little over the line,” or “Yeah, that’s a little too harsh there, Eck.” Never. It’s never happened because that’s not what Eck does.

NESN is essentially a propaganda channel. You’re not allowed to have strong opinions there, because the team owns the network. When you walk in the door, they clip your balls and give you an instruction manual on how to only say nice things about the team. And when things are going poorly, they teach you how to talk about how poorly things are going while still being nice so not to hurt the players’ feelings. The only problem is they forgot to clip Eck’s balls and he wiped his ass with the instructional manual. That’s why Red Sox fans love Eck, and apparently why players confront him on airplanes. He tells it like it is.

It was only a matter of time before somebody unearthed the details of what actually went down on that team flight, and a little less than a month later, we’ve got some details from longtime Barstool fan, Dan Shaughnessy.

Players being sensitive about commentary is not unique to the Red Sox. Friends and wives of ballplayers often relay remarks heard on television. At Fenway, there has been clubhouse disgruntlement about Eckersley’s style for some time. For Price, the tipping point came when he learned Eckersley said “Yuck” when Eduardo Rodriguez’s poor stats were flashed on the NESN screen after a rehab start in Pawtucket June 29.

On the day of the episode, Price was standing near the middle of the team aircraft, surrounded by fellow players, waiting for Eckersley. When Eckersley approached, on his way to the back of the plane (Sox broadcasters traditionally sit in the rear of the aircraft), a grandstanding Price stood in front of Eckersley and shouted, “Here he is — the greatest pitcher who ever lived! This game is easy for him!’’

When a stunned Eckersley tried to speak, Price shot back with, “Get the fuck out of here!’’

Let’s get one thing straight — this is indefensible. I don’t care what you’re upset about or what Eckersley said that you thought was out of line. That’s not how you talk to one of the most respected guys around the game, and he EARNED that respect after 24 years in the big leagues, a Cy Young and an MVP award — in the same season, no big deal — and it also doesn’t hurt that he’s a fucking Hall of Famer. Perhaps you’ve heard of the Baseball Hall of Fame. Nice little museum in upstate New York.

It’s completely and totally fine to disagree with something that Eckersley says on the air, but to do it in the way that Price did it is completely unacceptable. You pull him aside and you handle it privately. He’s not some shmuck newbie in the broadcast booth who thinks he’s a hot shot by shouting down players. If that were the case, then I think we all would feel much differently about how all of this went down. But like I’ve said before, if Eck criticizes you, it’s because you deserved it. He’s not out to get anybody. He’s not here to spout off hot takes or have something he says go viral on the internet.

Again, he calls it like he sees it, and if you have an issue with something he’s said, then perhaps it’s time for a lesson on accountability on your own part. And that’s not specifically a message to Price; it’s to the whole team. I’m not in the clubhouse — the Red Sox avoid Barstool like the plague — but from everyone I’ve talked to who’s in there regularly, they all say the same thing. It’s a very sensitive group. The narrative here is that Price is defending his teammate Eduardo Rodriguez, but I’m sure Price wasn’t much of an Eckersley fan prior to the “yuck” comment. That one little word is not enough to set somebody off like that, so it would not be shocking at all if Price were just using the Rodriguez comment as an avenue to air his own personal grievances.

About a month before the Price-Eckersley incident, I was talking to a player about Eckersley and I made some comment about how I thought the broadcast was substantially better when Eck was in the booth, and the player said, “Fuck that guy.” I was taken aback, because I was clearly oblivious to how players viewed him, so I asked if that was his opinion alone or if the rest of the guys felt the same way, and in choice words he said that Eckersley is not a very popular figure in that Red Sox clubhouse. A few weeks later, those sentiments came to a head on a team flight.

To me, that’s more of an indictment on the sensitivity of the team than it is on Eckersley’s ability to fairly analyze the Red Sox. The way Price handled the situation was shameful enough, but I was both surprised and extremely disappointed to read that some of his Red Sox teammates applauded afterwards. Like, what the fuck, guys? Really? The general consensus is that Red Sox players expect guys like Eckersley to take it easy on them because he’s “one of them” or some shit like that. The same goes for Lou Merloni. However, all due respect to my guy Lou, who I consider to be the best in this market at what he does, he’s not a Hall of Famer. I think that’s why Eck’s words carry more weight with these players and why they get so defensive and rattled when he calls them out.

It’s almost as if they know that if Eck is saying it, then it must be true, but he’s supposed to be one of us, so take it easy on us because you of all people should know how hard this game is. That’s not how it works, and some of these guys will learn this later in life when their playing careers are over, the MLB paychecks stop coming in, and their only marketable skill in life is their baseball knowledge. See how long your post-playing media careers last when you only say nice things about the players.

My advice to this Red Sox team — and I say this as both a fan of the team, and someone who is friendly with several of the guys — you need to man the fuck up. Criticism comes with the territory, especially in Boston. It’s part of the job. If the criticism is unfair, then I totally support and stand by a player’s decision to pull that individual aside and hash it out. But ripping a Hall of Famer on a team flight just for having a negative, yet accurate, take is childish. Grow up, block out the noise, focus on your performance on the field and winning baseball games. If you can do that, then there won’t be any negative takes to complain about. End of story.

Oh, and one last thing. Price owes Eckersley an apology. And not one of those bullshit, PR firm-crafted, fake ass, carefully-worded to save face in the court of public opinion apologies, either. It needs to be a genuine apology to his face. Price owes him one, the Red Sox players who applauded owe him one, and to be honest, I think John Farrell owes him one, too. Those are your guys that did that, John. Accountability. You will apologize, and you. Will. Like it.