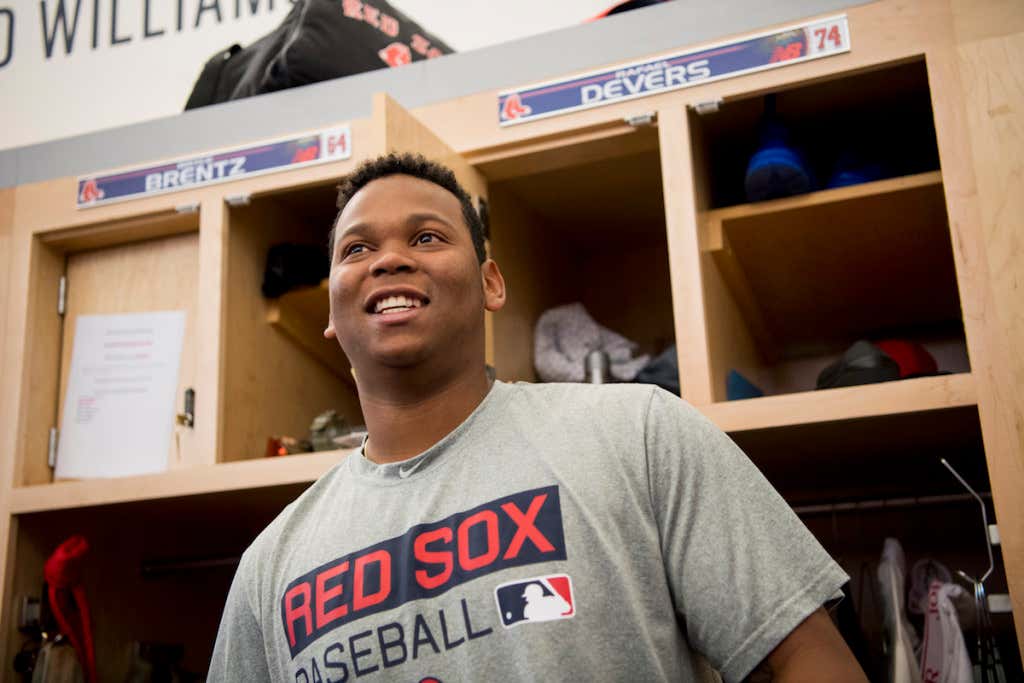 DEVERS DAY: Check out the highlights from Rafael Devers' Triple-A debut last night. Devers went 4-for-4 and turned in a web gem at third. pic.twitter.com/9JQs7wrn3k

Right after dropping the series finale in Anaheim by a score of 3-2 on Sunday, Dave Dombrowski casually dropped that the Red Sox will be calling up their top prospect, third baseman Rafael Devers. He joined the team Monday, and will be in the starting lineup tonight. My first reaction to this was that it seemed a little desperate. A couple of weekends ago, the Red Sox were trying to acquire Todd Frazier from the White Sox, and then all of a sudden, a week later, they’re calling up a 20-year-old to play third base, who also happens to be the youngest player in the majors by a significant margin.

He’s not just any 20-year-old, though. MLB.com has him listed as the No. 12 prospect in all of baseball. But just because you’re ranked that high doesn’t necessarily mean that you’re a polished player or a finished product. Devers isn’t either of those, which brings me to my main concern — his defense. If you talk to scouts who have watched Devers play, they’ll tell you that the glove isn’t there yet.

After being promoted to Triple-A Pawtucket on July 15, Devers made four errors in eight games at third base, two fielding and two throwing. Perhaps the Red Sox would be best suited to DH him as often as possible with Hanley Ramirez at first base. But then you also shoot yourself in the foot a little bit, because if he’s not getting reps at third base, then he’s not getting better at the position, and you absolutely need him to if he’s your third baseman of the future.

The Red Sox had made it clear a couple of weeks ago that they were not going to rush Devers to the big leagues, but uh, here he is after a little more than a week at Triple-A. I’m not complaining, though. I’m really not. The Red Sox are dead last in the majors in OPS at the third base position (.595), and the team is last overall in homers (99), and second to last in the American League in slugging percentage (.403).

Third base defense aside, Devers will help this team in that regard. At least, that’s the plan. Devers hit .400 with a 1.047 OPS in his limited time with Pawtucket, and has hit .311 with a .955 OPS between Double-A and Triple-A this year. There have been 309 minor league players who have played at least 75 games this season at either Double-A, Triple-A, or a combination of the two, and Devers’ .955 OPS is eighth amongst that group.

The Red Sox are probably going to say things like, Devers isn’t here to be a savior in our lineup, but he kind of is, no? I would assume no other moves are being made to help the lineup. Clearly the offense needed to be addressed, and every other position is locked in. I guess if Devers totally tanks then they can still make another move at third base, but if they’re committed to Devers down the stretch here, then they are most definitely depending on him quite a bit to improve an otherwise underwhelming offense.

Sure, the Red Sox are sixth in the majors in batting average and seventh in on-base percentage, but they’re the fourth worst team in the American League when it comes to leaving runners on base. They leave an average of 7.00 runners on base per game. Just to spell it out for you — the Red Sox do a swell job of getting runners on base, but they have nobody to drive them in, at least consistently. And I’m not saying that Devers is the answer, either. That’s a lot to put on a 20-year-old kid who was in Double-A less than two weeks ago. That being said, he should be a net positive to this team from an offensive standpoint.

The other big takeaway here is that if the Red Sox have chosen to promote from within to address their issue at third base, as well as their sputtering offense, then that means that they can now allocate more of their resources towards going out and getting a reliever at the trade deadline. Joe Kelly still has yet to return from the disabled list, and I think, at this point, we can forget about Carson Smith making any sort of significant impact on this 2017 club. Whatever you were going to use to flip for a third baseman, that can now be shifted over to the assets you can use to acquire a reliever.

When I was twenty years old, I couldn’t even save twenty-two bucks for a thirty rack on the weekends, never mind save a two hundred million dollar payroll ballclub in the middle of a pennant race. Good luck, though!