I can say without a doubt I’ve never seen a ball hit like that in a major league baseball game. Sure, in the home run derby balls jump out all over the place, but in a real life game where pitchers are trying to get you out, Judge did that? I mean this thing almost left the ball park. If that fan doesn’t jump from the second to last row to make a crazy catch it goes out to the back wall. Pure lunacy.

Just absolute insanity. They invented Statcast to track these types of things and give us almost instant numbers on how far and hard these balls are hit. So what did Statcast have for us?

“We didn’t track it”

Unofficial reports saying it went 415 feet. LOL. Off of the naked eye that baby went 530 feet and I will accept nothing less. I mean any lower number than that is just an utter lie.

Oh yeah, remember when people gave up on Judge and said the home run derby ruined his swing? Well to those people I say shame on you. It just took him a week to get back into the swing of things, literally.

P.S. Shout out to the worst piece of literature ever written 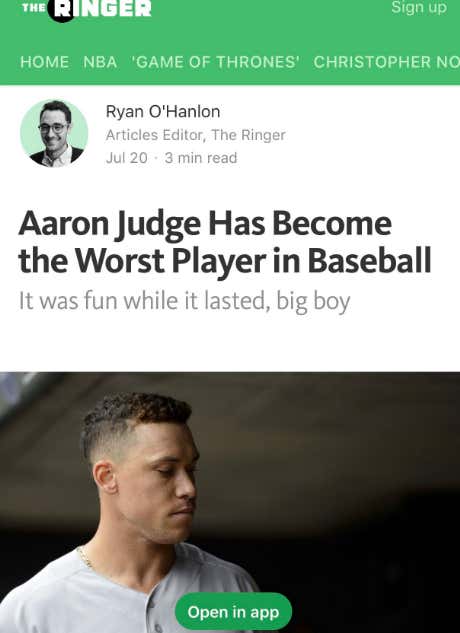