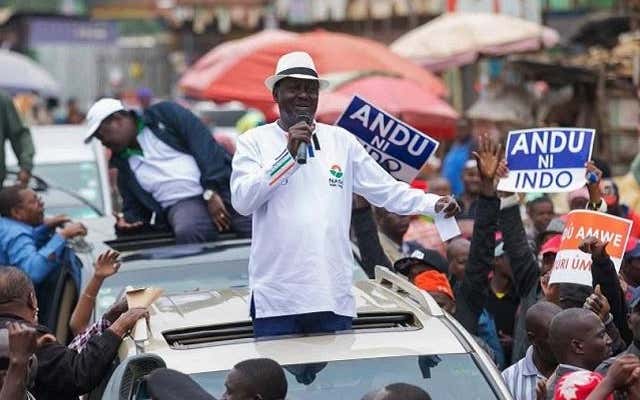 Source – Kenya’s main opposition leader Raila Odinga has called on his supporters not to have sex on the eve of the elections on August 8.

The National Super Alliance party candidate said on Monday in his local Dholuo dialect at a rally in Homa Bay in western Kenya that his supporters should only have intercourse after the results are announced.

This pronouncement follows a similar one in June when he explained that “when you are going for war, sex is a bad omen.”

This is a common belief in many parts of Africa.

72-year-old Raila Odinga, who lost the last elections to incumbent Uhuru Kenyatta, called on the youth to be vigilant on the polling day to avoid rigging.

I’ll admit up front everything I know about the Kenyan election is contained in the above five sentences. But nevertheless, I’m throwing my highly sought-after support fully behind my guy Raila Odinga. This is the man in this race who truly gets it.

Sacrificing sex for the greater good is not just a common belief in many parts of Africa, it’s a time-honored tradition in this country, too. You don’t have sex the night before a Super Bowl. Pitchers don’t do it on the night before a start. “Women weaken legs, Rock!” and all that.

But this is also leadership in its highest form. Old timers like Odinga are always going on about how soft Millennials are. How they’re not asked to sacrifice like his generation. And so he’s calling upon them to do just that. Like JFK himself said “Ask not what your country can do for you; ask what you can do for your country.” And during the darkest days of the Cuban Missile Crisis he hardly banged any White House staffers at all. Just think how much better off we’d be if everyone stopped doing the Beast With Two Backs for one night and paid attention to the election instead. Do you think the Russians would’ve had a prayer of … doing whatever it is they supposedly did, which no one has really explained to me to this day, to a nation keeping its collective dick in its pants in the name of democracy? Hell, no.

So best of luck, Raila Odinga. Both on your campaign and your noble mission to keep your countrymen from getting laid. We could use a leader of your caliber in the U.S., and you have my coveted endorsement. Make Kenya Celibate Again.