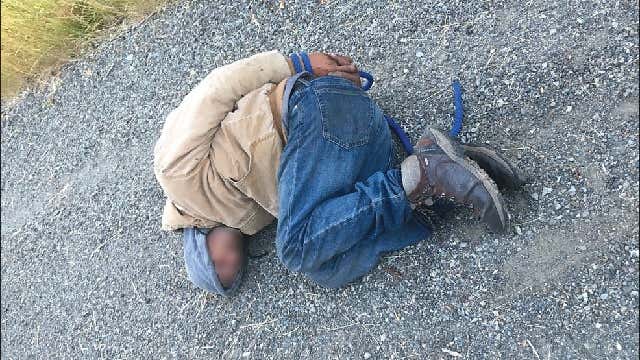 Washington – A homeowner in rural Glenoma in Lewis County got a big shock Monday morning when he awoke and found a stranger sitting at his kitchen table calmly eating a bowl of cereal. A few minutes later, the stranger found himself hog-tied along the roadside after he tried to flee.

Apparently the stranger had walked right in the house, helped himself to some cereal, poured milk on it and sat down to enjoy a bowlful.

But when the stranger saw the 69-year-old homeowner, he jumped up and ran from the house. The homeowner grabbed a rifle and ran after him.

Meanwhile, another resident of the home called 911 and deputies were dispatched to the scene.

The homeowner found the suspect – later identified as a 52-year-old transient from Tampa, Fla. – along the roadside about 500 feet from their residence and ordered him to the ground at riflepoint.

The suspect complied and the homeowner put away his rifle. The residents then hog-tied the suspect and waited for deputies to arrive, Breen said. …

The suspect told deputies he had just tried a “new drug” in the woods. He also said he had been in Florida only a few hours earlier.

As Clint put it in Gran Torino, “Ever notice how you come across somebody once in a while that you shouldn’t have fucked with?” That’s this 69-year-old homeowner. Getting high in the woods then breaking into someone’s house to steal a bowl of Cap’n Crunch Sprinkled Donut Crunch might be the hotness down in Florida, but that shit won’t fly in rural Glenoma, WA, I can promise you that.

Of course this begs the question why anyone would travel 3,500 miles in the span of a few hours to go to the middle of nowhere, try a “new drug” in the woods, commit home invasion and steal cereal. Or how he managed the trip. But at this point, do we need an answer other than “Florida”?

It doesn’t matter where you live. Tampa. Boston. New York City. Rural Lewis County. You’ve got to have a plan in place for how to deal with a high, 52-year-old transient Floridian breaking into your house and messing with your stuff. Good for this old timer and his neighbors they were prepared. By the sound of things they’d run a few drills and taught themselves all the right knots for properly hogtieing a Florida junkie. So let this be a lesson to us all. No one is safe. Be prepared. And lock up your cereal.