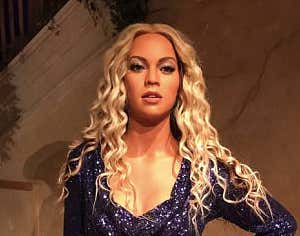 Source – Beyonce’s fans are not happy about her Madame Tussauds wax figure and have even accused the museum of ‘whitewashing’ her likeness. The highly-popular wax museum took to their Twitter to announce that the figure of the 35-year-old Single Ladies star had been moved to their New York location.

That was when several members of the Beyhive got active on Twitter to trash Madame Tussauds. One user pointed out the skin tone of the statue as they wrote: ‘Something’s not white right with this wax figure of @Beyonce.’

Some even compared it to the spot-on replica of Kylie Jenner unveiled at Madame Tussauds in Hollywood on Tuesday. A Twitter user joked: ‘So how does Kylie’s wax figure look realer than her while Beyonce’s looks like a white Mariah Carey?’

Madame Tussauds responded to criticism as they claimed that it was all a matter of the lighting in the social media post.

A representative for the company told TMZ on Wednesday: ‘”Our talented team of sculptors takes every effort to ensure we accurately colour match all of our wax figures to the celebrity being depicted. ‘Lighting within the attraction combined with flash photography may distort and misrepresent the colour of our wax figures.’

When you mess with the Beyhive you get the horns. That’s what the bible tells us. I wanted to take Madame  Tussauds’s side but I can’t. This is a white lady: 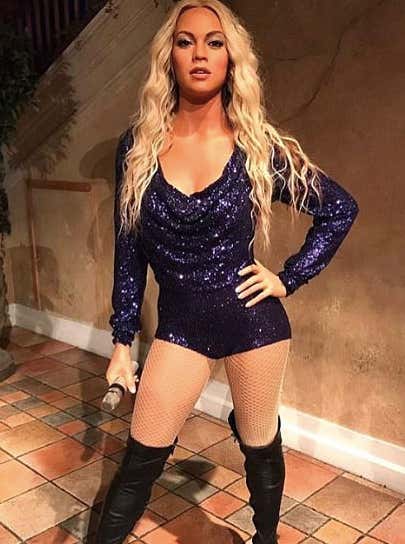 Beyonce is a black lady. That being said, the people saying this are part of some racial conspiracy or white washing agenda can GTFO. They probably just had a new kid at the doll-dipping station. Or maybe the skin tone guy wanted to get home early so he yanked her out of the oven too soon. Doesn’t matter. Just fix it and move on. If the great recession didn’t shut MT’s down neither will a little whitewashing scandal.

The whole concept of celebrity wax figures is bizarre. It really says a lot about America’s obsession with celebrity. We literally create life-sized dolls to take pictures with. Don’t get me wrong, if I was a celebrity I’d love to  be immortalized in wax, as long as I could have creative input. Seeing myself as is would be a tough pill to swallow. Way worse than looking in a full length mirror or seeing a picture on Insta. Maybe that’s what Beyonce did here, made a few last minute tweaks. Who knows, but I’m ready to see the V2.