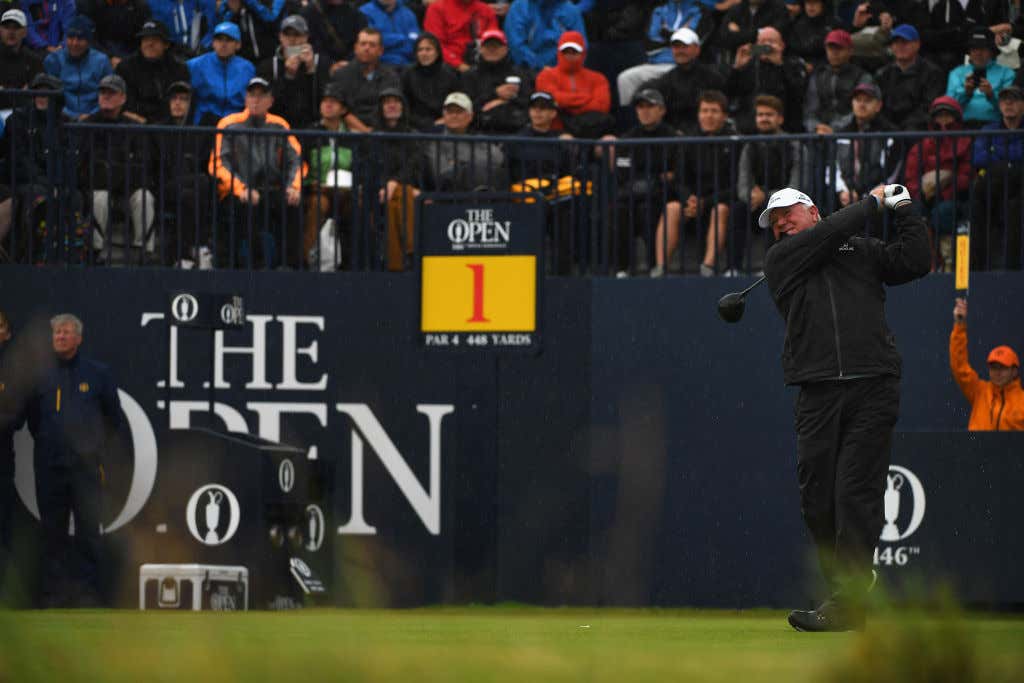 There are certain things you want to see out of your major championships. At the Masters, you want a shootout on the back nine on Sunday. At the U.S. Open, you want guys missing fairways by a foot and having to lash 60-degrees back into fairways.

Last night I decided to stay up for the first shots of the tourney. Our coworker was on Late Night with Seth Meyers so it made it a pretty easy transition to catch those 1:35AM tee shots.

And boy am I glad I did. Mark O’Meara — the 1998 champ at Royal Birkdale — was contacted a few weeks ago by the R&A about hitting the first tee shot. He did, and with all due respect to Mark, who seems like a lovely fella, it was a train wreck.

He then reloaded, hit his second into a fairway pot bunker, and proceeded to make a snowman. A quadruple bogey 8 on the opening hole.

His playing partner Ryan Moore did not fare much better. Moore hit one into the right rough, took a fairway wood to get it about 50 yards short of the green, pitched on, and made double.

Chris Wood, the third in the group, hit an iron off the tee, laid up short with an iron on his approach, pitched it to a foot, and made a tap-in par. There are many ways to play this game; sometimes you just gotta stick to the game plan.

We would then get an OB ball from each of the next 2 groups. It was awesome. The first hole is the hardest opening hole of the Open Rota in the last 20 years; it was made even tougher this morning with rain and a stiff wind into the players and off the left (much different than it was in the practice rounds).

O’Meara would go on to shoot 81. O’Meara is the man, and he’s 60, and he’s won here so he can do whatever the hell he wants — we just, as I mentioned above, like to see horrific weather leading to disaster at our Open Championships. Unfortunately he was our guinea pig.

At the timing of this writing, Spieth and Koepka are tied for the lead at 4-under. Relax guys, we’re not here for rounds in the low 60s.

PS — Oh and some guy named Ian is the leader in the clubhouse. Fuck him.