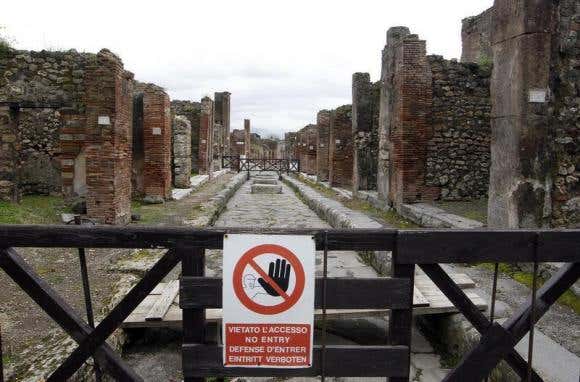 An 80-year-old Spanish tourist has been denounced for attacking one of Italy’s most renowned monuments after he defecated in the ruins of Pompeii.

The unnamed tourist is said to have been caught short in the Casa del Menandro, one of the homes best preserved in the ancient city. According to El Mundo, the man’s wife helped him by keeping look out. The elderly man was suffering from incontinence and could not wait to go to the toilet, according to reports.

Italian newspaper Il Mattino di Napoli reported that the warm weather in the Naples region and the man’s rather large meal did not help his situation.

Now this is a love story. What a woman this Spanish lady is. She knows her man had a BFM (big fucking meal) and needed to take a BFD (big fucking dump) so she stood on the lookout. Didn’t matter where they were. She’s a ride or die bad bitcc. When the moment hits you and you’re 80 and suffering from incontinence, you go where you stand even if you’re standing on historical ruins with historical runs.

I honestly dont see what the big deal is. Pompeii is already ruined so what does a little poop hurt? Sprinkle some dirt on it like you’re a freakin kitty cat and be done. No need to shame this older gentleman. Show the elderly some damn respect. Even the Italian newspaper knows that being warm and having to poop is the worst. Instead of shaming this fella, we need to study him. Having 80-year-old knees and being able to squat without a toilet is a medical miracle.

Final note: I wanted to write “more like Pompoopoo” in this blog but I didnt out of respect for the people who lost their lives there in 79ad. I feel like it’s too soon still. RIP.