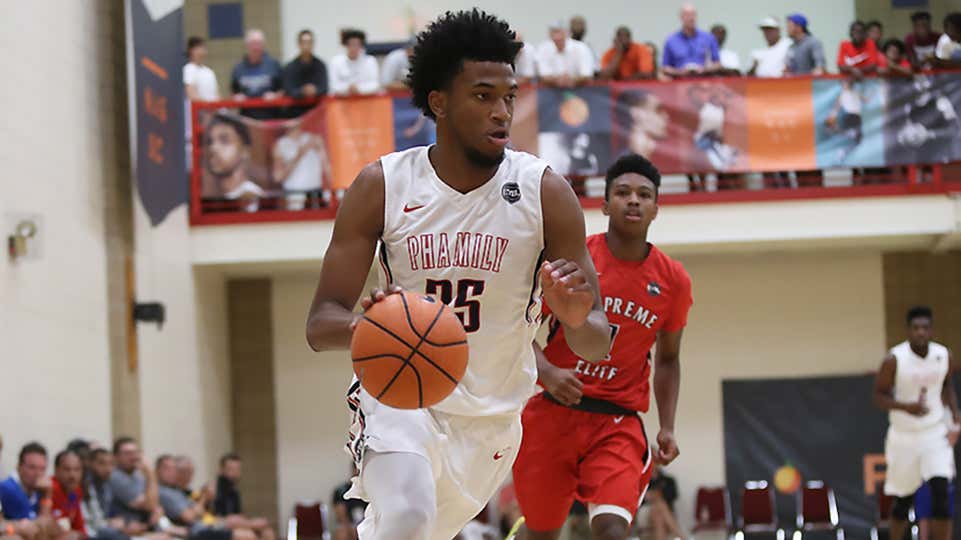 Marvin Bagley is wildly considered the best prospect at any level of basketball currently. He’s about to be a senior out at Sierra Canyon, California and is currently playing for Nike Phamily in the EYBL (with a stop at the Peach Jam most recently). News broke over the weekend that he’s mulling the decision to reclassify and skip his senior year of high school – something that multiple people have confirmed while there has been no decision announced by the Bagley family.

This is obviously all working under the assumption he has no problem getting cleared by the NCAA and that all his credits are in order, etc. If it does happen the three schools in the running for Bagley this year are Duke, USC and Arizona. Kentucky – once an expected leader to get him – is presumed to be out of the running for Bagley this year. Bagley did announce at the Peach Jam that he’s taking an official visit to Duke sometime this week and then visiting Arizona and USC (in that order) at some point.

There’s no question that if Bagley reclassifies, the entire thought process heading into the college basketball season will shift. Duke, USC and Arizona are all top-10 teams already – with Arizona being No. 1 in some polls. He would immediately make Arizona the likely consensus No. 1 team or move Duke/USC up into the top-3/4 depending what you think of Kansas. On top of that he would immediately jump Michael Porter Jr., Mo Bamba, DeAndre Ayton and Luka Doncic as the No. 1 prospect heading into the 2018 NBA Draft. That right there is why it makes all the sense in the world for Bagley to reclassify if he can. There’s no reason to delay getting paid when you’re as good as Bagley. The Arizona native is a 6’11” combo forward that can handle the ball, attack off the bounce, protect the rim and rebound at an incredibly high rate. We’ve seen him play in the Drew League as well as the EYBL and you can tell he already just has the look of a guy ready to play in the pros. It’s well known I’m very pro-player so the quicker you can get paid, the more I support that decision. The other follow up here is if Bagley reclassifies does that mean RJ Barrett will reclassify to the class of 2018 – something people believe will happen.

Anyways, because this is BarstoolU and Kmarko has set an important precedent, here are his highlight films. He’s absurdly good: