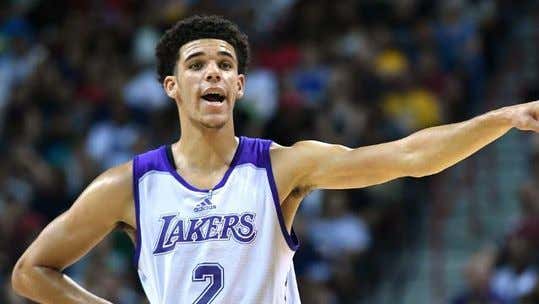 There’s been a certain buzz around the Summer League this year we haven’t really seen before. Part of it is there’s simply more coverage and it’s more of an event now. The other part is the hype around this rookie class, especially Lonzo Ball. I have to say he’s playing up to expectations. It’s weird with Summer League, because guys should dominate. There’s an obvious gap from an athletic and talent standpoint of those who were lottery picks and those undrafted free agents trying to make a roster. So you look for tendencies or changes in a persons game for someone like Ball. I don’t know how ‘hot takey’ this is, but I’m not worried about Ball’s shot or his shot form. I say this because he’s not shooting the ball well during Summer League, which a lot of people like to bring up. That’s not remotely close to his biggest weakness. Ball is a good shooter, especially from the 3-point line. He shot 45% at UCLA and I expect him to shoot somewhere around 38% or so consistently at the NBA level. He has plenty of range and can shoot both off the bounce and in catch and shoot situations. His bigger weaknesses are on-ball defending, midrange game and how well he can handle the ball. Now, what Ball is doing is putting on a highlight film of passing. He’s been doing this since Chino Hills and at UCLA in terms of pushing the tempo with outrageous outlet passing. That will translate to the NBA. His passing in the halfcourt has been really good, part of it is not seeing a complex defense, but he’s also finding the right pass. He’s not forcing the extra one. 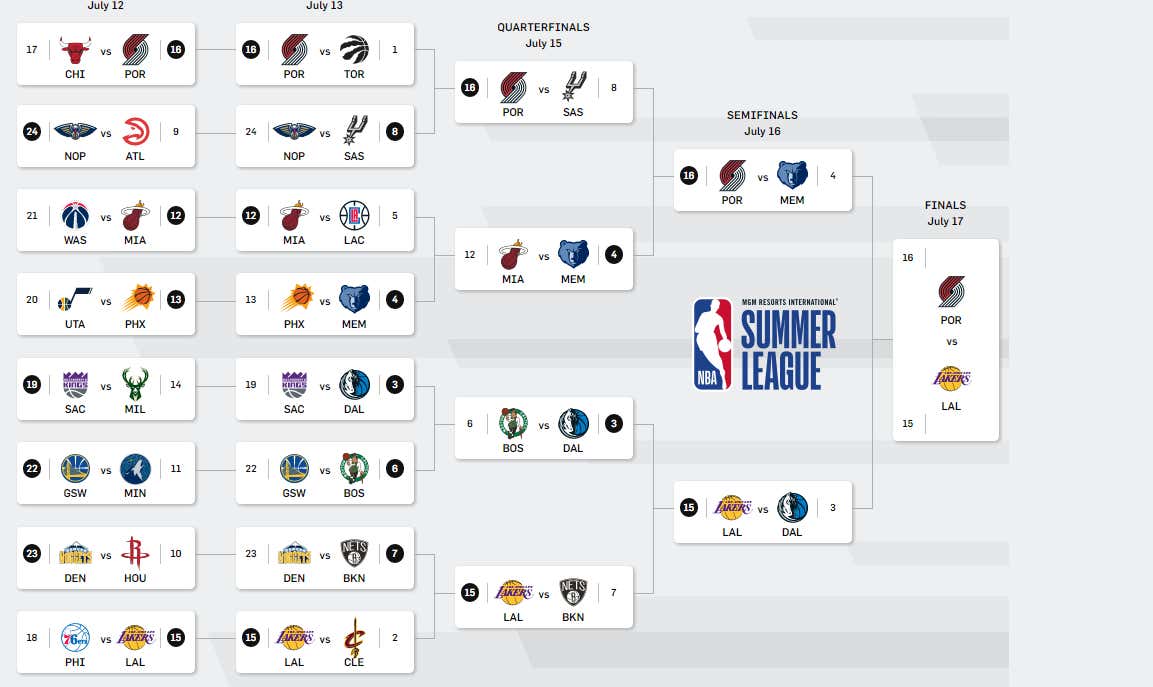 Last Summer League game of 2017 will be the Lakers  vs the Blazers. If you missed last night, the Lakers were without Lonzo Ball for the second half as he suffered a calf injury.

Update: They just announced that he will be out tonight. No real surprise as this is the smart move:

The Blazers are on the other hand came back from 19 down against Memphis to reach the title game. They are very balanced with guys like Caleb Swanigan, Jarnell Stokes, Jake Layman and Jorge Gutierrez. Swanigan has been the rookie to watch for the Blazers as he’s shown off not only his rebounding will translate to the NBA, but his passing. He was a good passer at Purdue from both the low post and high post settings, something that we’re seeing him do in Portland as he stretches out to the 3-point line.

I’ve talked about him before, but it’s worth talking about him again. What Mark Gottfried did at NC State with Dennis Smith Jr., was one of the worst coaching decisions I’ve ever seen – without hyperbole. Smith Jr., is a guy that thrives in the open floor and having space to create. Evidence:

This is just one from last night as he’s done this roughly 48 times in Vegas. At NC State, people wondered when we’d see more from DSJ or why they weren’t as successful. It’s because Gottfried loaded up dudes in the middle of the paint, forcing DSJ to play away from his strength. There were often 3 guys clogged in the lane as he’d turn the corner and couldn’t attack the rim. Smith is a special player when driving and the Mavericks will be able to space the floor with great ease. People asked me why I considered playing in the pick-and-roll a huge strength for Smith and that’s why. He’s great in that set when he has the room to operate. Dallas will be able to do that as Dirk can space the floor, Wesley Matthews and Harrison Barnes can space the floor. That means it’s just Smith and Nerlens Noel running the PnR, which means Smith will have great value if you want to bet on him for Rookie of the Year. He was one of the most impressive rookies in Summer League (I’ll have more on that as I do a Summer League recap tomorrow).

This was a move over the weekend that plenty of people were talking about. Rondo signing the one-year deal with the Pelicans, after they signed Jrue Holiday to a massive 5-year deal and drafted Frank Jackson. To me, it’s not the worst move. There are obviously some issues as Holiday will likely be pushed off the ball, but the biggest issue is floor spacing. Assuming the Pelicans play Davis/Cousins/Rondo/Holiday together the most, that’s not a lot of shooting out there, especially in today’s NBA. Now, that said, this was something Cousins wanted. He excelled in Sacramento with Rondo there as he scored 1.07 points per possession with him and became good friends with Rondo. That’s the key for the Pelicans as they will try to keep the core of Cousins/Davis together, giving them two stars, in a star-dominated sport. The Pelicans will have to get creative with who else they bring in, especially if Cousins resigns after this year, but this isn’t a terrible move. There will be plenty of length defensively, the question is just how much do they care?

Hawks Back Out of Mo Speights Deal:

It will be intriguing to see where Speights ends up now. He can definitely help a playoff team as a scorer off the bench, it’s just what team is willing to bring him in and at what price? A lot of people seem to think Indiana will be the place where he ends up as the Pacers try to push for the playoffs in a weaker Eastern Conference.

Luc Mbah a Moute Signs with the Rockets:

I absolutely love this move by Houston. It’s one of those where it’s not incredibly sexy, but makes a ton of sense. The Rockets need to bolster help on the wing and wing defense, that’s where Mbah a Moute shines. Throw in the fact he spent time with CP3 in Los Angeles and it’s the correct match. More importantly he fits today’s model NBA as a 3-and-D guy who can guard multiple positions. He can play the wing or defend in the low post, meaning you can play him at the four spot if you really want. On top of that he shot 39% from the 3-point line last year as the Clippers are trying to go all-in on beating the Warriors this year. Will it happen? Probably not.But, I love what they are doing.

This is simply a great story for Simmons. The dude paid to go to a tryout, busted his ass in the D-League and became a legit rotational player in the NBA. If anyone deserves to get paid, it’s Jonathan Simmons.