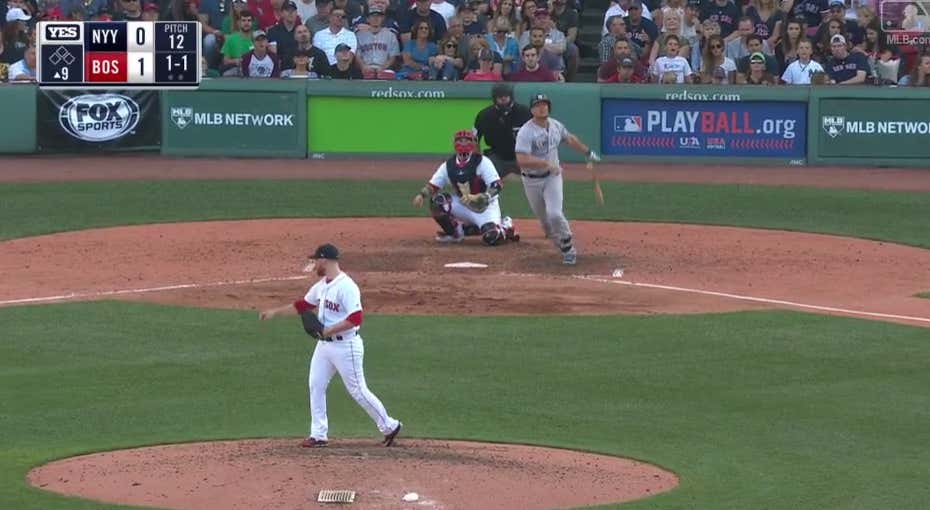 It was an up and down weekend in Boston, to say the least. Friday night was an absolute brutal loss. On a night where the pen created a perfect bridge to Chapman, the fire balling lefty looked pedestrian at best. His location was awful and his pitches were ineffective. Combined with walks and a badly booted ball by Torreyes, not one ball left the infield. The result? Not one out being recorded, and a devastating loss.

That brought us to Saturday with Chris Sale on the hill. There may not be a more intimidating opposing pitcher than Chris Sale. The entire time he’s on the mound you’re staring at his pitch count, just praying Farrell makes the call to pull him. That moment didn’t come until the 8th inning with two outs and Aaron Judge stepping to the dish. Exit Chris Sale. Enter Craig Kimbrel. AWESOME…

Even though Judge flew out to right to end the inning, he did more damage than it appeared. A ten pitch at bat allowed Kimbrel to entire the 9th with a little fatigue. It was just enough to do the trick

Craig Kimbrel’s first blown save at Fenway Park as a Boston Red Sox. Man oh man does it feel good to have Holliday back in the lineup. The 2-3-4 of Gary-Judge-Holliday is as fearsome as they come.

Innings 10 through 15 on Saturday were not good for my health. It seemed like every inning the Sox had runners in scoring position with less than two outs. Any base hit at those times ends the game and the bullpen held strong somehow. After a month and a half of turmoil and blown lead after blown lead, everyone stepped up in a big time effort.

In the 16th the bats exploded…

Shoutout to every who came by Brazen Fox on Saturday for the watch party. Safe to say we will definitely be doing these more frequently in the future. Looked like everyone had a blast, especially during Holliday’s homer.

Really glad my co-workers are starting to like me…

The baseball gods are pretty evil at times, and Sunday they did their worst. Oh you just played a six hour game that lasted 16 innings? Well, you get a fucking double header the next day! Have fun with your bullpens.

In the afternoon session CC Sabathia returned to the CC we loved during the 1st half of the season. CC has been here for years and knows this rivalry better than almost anyone on the team. He pitched ANGRY yesterday, and the Red Sox had zero answer for the big guy. If not for the five walks, CC probably goes 7+ rather than 6 innings, but I’ll gladly take six innings of two hit ball. Girardi turned the game over to that four-eyed fuck Tyler Clippard and he managed to skate around a leadoff single to have a clean inning for the second straight day. Wild stuff.

The most reliable pitcher on the entire team, Chad Green, came into the game for the 8th inning and worked around two walks to have a scoreless frame himself. Dating back to June 15th, Green has surrendered one run and has lowered his ERA to a sparkling 1.75 ERA. If I need to get a man out in a big spot I’m not going to Betances or Chapman. I want Chad Green with the ball in his hand.

Chapman came out for the third straight day, two days after his meltdown, and closed the game out. So that was two games in a row where the bullpen, which at one point was the strength of this team, did their job and what do ya know? We won both goddamn games. It’s almost like if your starter does his job and the bullpen does their job you’re probably going to win the game! What a mathematical formula!

Could we possibly win a series? Do you think there was a little part of me that was hoping the clouds would open up and the game would get rained out? Sure was. Well, that wasn’t the case. Tanaka against Price on Sunday Night Baseball, and it didn’t go our way. Overall, Tanaka pitched more than fine. Usually if your starter gives you 7 2/3 IP and allows three runs, you should win that game. Hats off to David Price who pitched maybe his best game ever against the Yankees, a team that notoriously owns his life. He was fantastic, and the moment Betts hit the two run bomb to take the lead, Price seemed to zero in even more. He wasn’t losing that game last night.

Farrell almost left him in too long though…

When you’re slumping, you’re slumping. Hit a ball 415 feet going more than 110 mph off the bat? Well, when you’re slumping that ball get miraculously caught. One of the best catches I’ve seen in some time and it put a knife in my chest. Am I concerned about the dry spot Judge is going through? I was, I certainly was, until that rocket. He’s going to be just fine. Bartolo Colon and his 8 ERA should put all our fears to rest by Tuesday.

So in the end was it a good weekend? Absolutely. The bullpen got their confidence back, even Tyler Clippard, who was forced into big situations after the rest of the arms were depleted. Betances is getting his confidence back and Chad Green continues to be a rock. The lineup is the healthiest it’s been in quite a while and actually looks like it’s capable of scoring runs again.

This week, New York heads to Minnesota for three and Seattle for four. I think we can actually win a series guys! Minnesota doesn’t scare me at all and neither does Seattle quite frankly. Give me a 5-2 week and nothing less please.

Actually fuck…the Yankees have never faced tonight’s starter Adalberto Mejia, Wednesday’s magician Jose Berrios, Friday’s starter Andrew Moore, Saturday’s Ariel Miranda, or Sunday’s Sam Gaviglio. If you watch the Yankees like I do you know how atrocious they are notoriously against starting pitchers they’ve never seen. It’s like they get their scouting report and just throw it out immediately. Oh you think we’re going to use other team’s scouting reports? No chance…idiots.

Probably looking at a 1-6 week now…