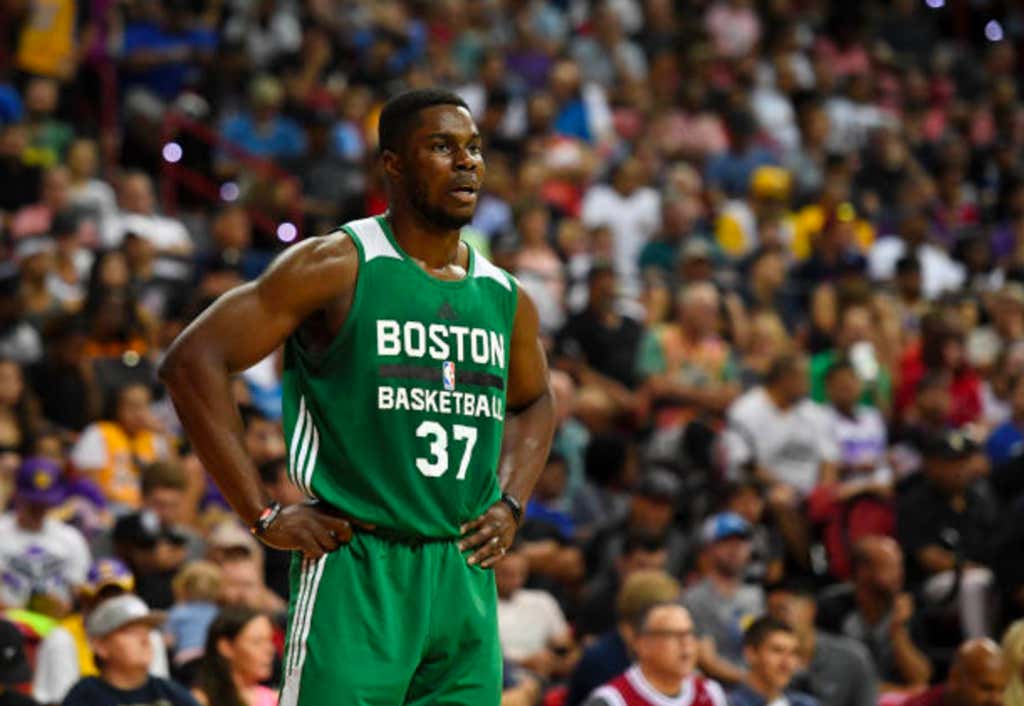 You know, I’m a little disappointed. When the starting lineups came out and it became clear the Celtics were going to be without Jaylen, Tatum, Nader, and Zizic in their quarterfinal matchup against fellow undefeated squad DAL, the Celtics were clearly calling it wraps on their summer basketball. For shame I say. How dare they not take fake Summer League championships as serious as some of us. Personally I did not invest the time and money just to see them not even make an effort to bring home another banner for the second consecutive summer. Call me crazy, but I think it helps your young players develop the more they play, but I could be reaching there I dunno. As a result, we witnessed without a doubt the worst display of “basketball” all summer, but as you know, this isn’t a front running blog. We don’t just celebrate when things look good, where’s the fun in that? So, despite making me want to gouge my eyes out, we should talk about a couple things from yesterday.

– Because every Celtic that played pretty much played like dogshit, we’ll start today with the summer’s most important competition. Who will win the 2017 Summer League Crush award and forever have a place in my heart? Last year Terry Rozier and Yabu put up a tight race all the way to the finish line with Rozier coming away with the final rose. This year? Things have been a lot more fluid. If you remember, these were the opening odds before we tipped off in Utah

Jaylen as expected was the early favorite, and after his opener against PHI it surely seemed like he was going to have no problem capturing my heart. But his new best friend said not so fast my friend. Before we knew it Jayson Tatum was hitting game winners, dropping 27/11 on the Lakers and pulling out moves that truly made my jaw drop. All the sudden my heart was confused. That’s love for ya. Just when you think you’re going in one direction the heart reminds you that it wants what it wants with no regrets. Well, after their final game yesterday, it gave me the final rankings

And with that, the competition is closed. My heart has made it’s decision and frankly I could not be happier. Jayson Tatum is your 2017 Summer League Crush winner and he sure as hell earned such a prestigious honor

So Jayson, I have just one last question to ask….

I just hope these guys can be professional about this and not have any frustration carry over into the regular season. Don’t be mad Jaylen, still love you too 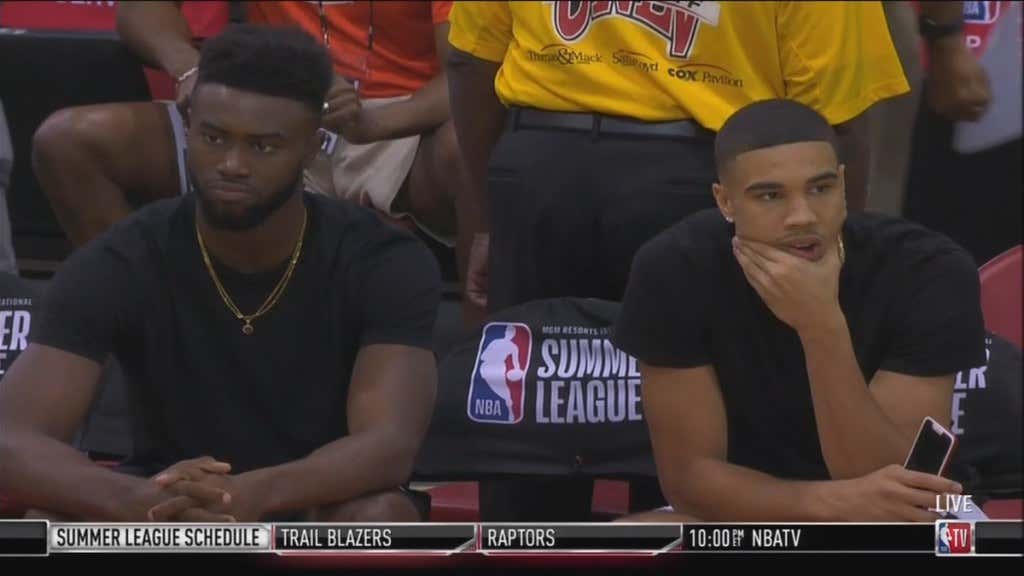 – Maybe one of the biggest surprises for me this summer was the play of Jabari Bird. If he can do things like this

he’s going to find himself with one of the Two Way contracts the Celtics can offer. If I were to guess, it’s going to be Bird/Allen who get them since Nader and Semi are coming to the NBA roster. Not a bad showing for two second round picks and while the Celtics needed more from them yesterday with everyone out (it didn’t happen), overall you have to be pleased with their play over these past two weeks.

– Praise God the Celtics ended their Summer League play without any major injuries. Some teams were not as fortunate, and seeing as how there have been some monumental losses for the Celts in this department (more on this in a second), everyone is coming into camp healthy (minus Isaiah) and that’s the best possible scenario.

– There wasn’t much the Celts did well in this game, but I was impressed with how they were able to limit Dennis Smith Jr. You’d think in a game in which the Mavs absolutely destroyed BOS that Smith Jr probably had a pretty big impact. He’s been LIGHTS OUT all summer, and yet he basically was a non factor in this game. A total of 3 points on 1-6 shooting and just 2 assists, this was certainly NOT the rookie showcase for both teams I was hoping for. I still think he’ll be really good once the season starts, but credit Bird/Allen for making it tough on him in his 15 minutes.

– That first quarter was good. That’s basically it.

– It sucks the Celtics punted this game because had they won, we would have gotten a BOS/LAL Semifinal matchup. WHO WOULDN’T WANT THAT??? A little revenge game from their earlier matchup in Vegas, this would have been must watch television. Instead, we don’t get that. It was taken from us with no remorse. Not cool Ainge/Brad & Co not cool. I needed to see Tatum outplay Lonzo yet again and you stole that from me.

– On one hand the the Celtics didn’t have any of their offensive players available so I get why they couldn’t score. The same thing cannot be said about their defense though. Bird, Allen, and Semi all played, and the Mavs shot 50/45% for the game. Yogi Ferrell looked like Jordan, as did Brussino. Between the two of them they went 8-14 from behind the arc and shit the Celtics couldn’t even start that Ding dude from China (11 points on 3-5 shooting). It was clear the Celts were over playing in the Summer League and their defensive effort was a dead giveaway. Combine that with going 9-28 from deep and things could have been much much worse.

– Shame on any Mavs player who took a shot in the last few minutes of that game other than Ding. It’s Summer League for crying out loud, give the damn people what they want! Did you hear how loud it got every time he touched the ball? It was like when Scal would come in late in a game x1000000.

– Now look, this is a summer we all should be feeling great. Our 53 win ECF team just added an All Star talent, their draft pick looks legit as hell, and they were able to keep the majority of their main pieces as we head into the season. I’d say we would call this a great summer 10 times out of 10. And yet, all I feel right now is sadness. We all knew that to bring in Hayward someone would have to go, and Avery ended up being that guy. That still stings, but NOBODY and I mean NOBODY told me it was just going to be the beginning.

First, we got this news

and it hit me like a ton of bricks. I fucking LOVE Bryan Doo. Guy is the best strength coach not only in the NBA, but probably in the entire universe. If you’ve watched this team at any point over the last 15 years, you know how important he was to this team and franchise. I was not prepared to handle news like this on top of the Avery loss, and I’m going to miss the shit out of seeing Doo run around during warmups loving life. When I think of why guys on this team throughout the years have developed and improved, Doo is a big reason why.

But this wasn’t the end. Farrrrrrrr from it. It only got worse

Disaster. Utter disaster. Our pets heads are officially falling off and I don’t like this one bit. Are the Celtics not aware that Isaiah is in the process of rehabbing back from a hip tear? Perhaps the best strength coach and the best trainer in the universe would be helpful? I need answers and I need them this instant. Apparently I’m not alone with my anger/sadness so at least that’s comforting 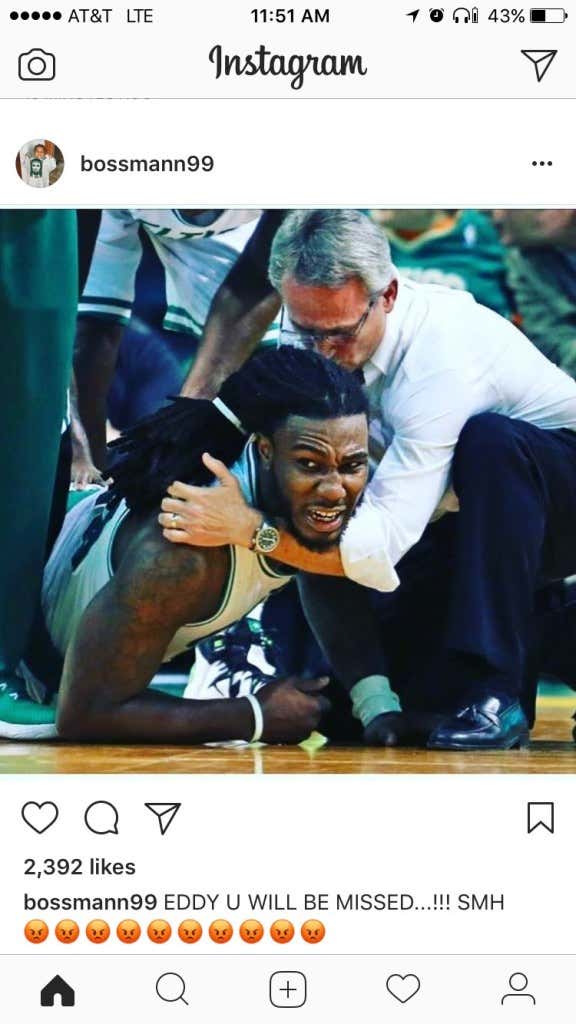 So if by chance the kids of these legends are stoolies and reading this blog, please tell your Dad he is an absolute legend and he will be sorely missed.

With that we step away until training camp/preseason which is still a few months away. I’d like to see guys like Zizic take this time to get in better shape, Jaylen to continue to work on his ball handling, and Isaiah to continue to rehab and be able to avoid surgery. On the court I’d say this summer was a success for this group, some of the questions we had going in were answered, and some guys actually proved to be pleasant surprises.

93 days till the season starts. That’s nothing.