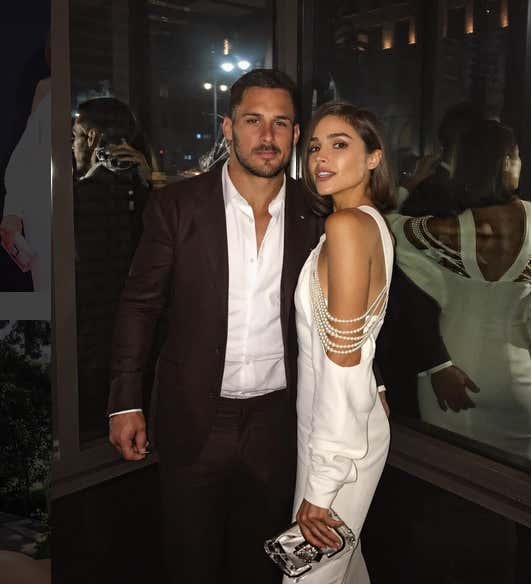 Patriots.com – Danny Amendola always dresses to impress. He makes it a point, whether he’s hitting the red carpet or strutting down the runway, to look his best, and with his sense of style, his best is unquestionably fashion forward.

Now, this interest in fashion has blossomed into an entirely new opportunity: modeling.

Danny recently signed on as the newest Ford Model, a legendary modeling agency based in New York City. His signing makes Danny the first NFL players Ford Models has signed. …

Sam Doerfler, Men’s Director at Ford Models, sees the potential for Danny in the world of modeling.

“We are thrilled to represent Danny Amendola, not only one of the top athletes in his field, but also a man of great character,” Sam said in a press release. “Danny’s work ethic, drive, and track record of success help make him the perfect fit to partner with some of the best brands and creative teams in the fashion industry, and we look forward to bringing him those opportunities.”

How many times have I told you that Belichick’s method of building a winner – what the real Patriots Way is all about – is assembling a superroster of incredibly handsome Alpha Males. Winners off the field as well as on. Because guys who can land a trophy wife have the mental toughness, drive and determination to land a Lombardi Trophy. It’s how Belichick lives. It’s how Mr. Kraft lives. And they want a locker room of men like them.

And what better to prove my theory than the fact that Danny Amendola – no disrespect intended but arguably the fourth or fifth best looking guy on the team – just became the first football player ever to sign with the preeminent modeling agency in the world? Again, I’m not throwing shade at Amendola. There is zero shame in being runner up to world class bohunks like Tom Brady and Jimmy Garoppolo. And watching him the last three years, I have no doubts at all he’ll hit supermodel status in a matter of days. When he was walking the runway at NYC Fashion Week, Olivia Culpo was sitting in the front row and basically turned the floor into a Slip & Slide. All you need to do is check the hand placement on that picture of the two of them. That is the mark of a pro’s pro. A man who was born to do win championships and do modeling shoots.

Besides, his game is perfectly suited to the fashion game. We’ve seen him go over the middle, run shallow crosses, digs, curls, fades. Moves like Blue Steel, Ferrari, Le Tigre will be child’s play to him. I remember the first day the Pats signed him to replace Wes Welker, I caught his reflection in a spoon while I was eating my cereal. And I remember thinking “wow, you’re ridiculously good looking, maybe you could do that for a career. Be professionally good-looking.”

So just in the last few weeks we’ve had Brady’s tuxedo breaking the Met Gala. Belichick’s record-setting Nantucket Magazine photo shoot. Edelman’s Body Issue spread. And now Amendola signing on with Ford. The ball is in your court, rest of the team.