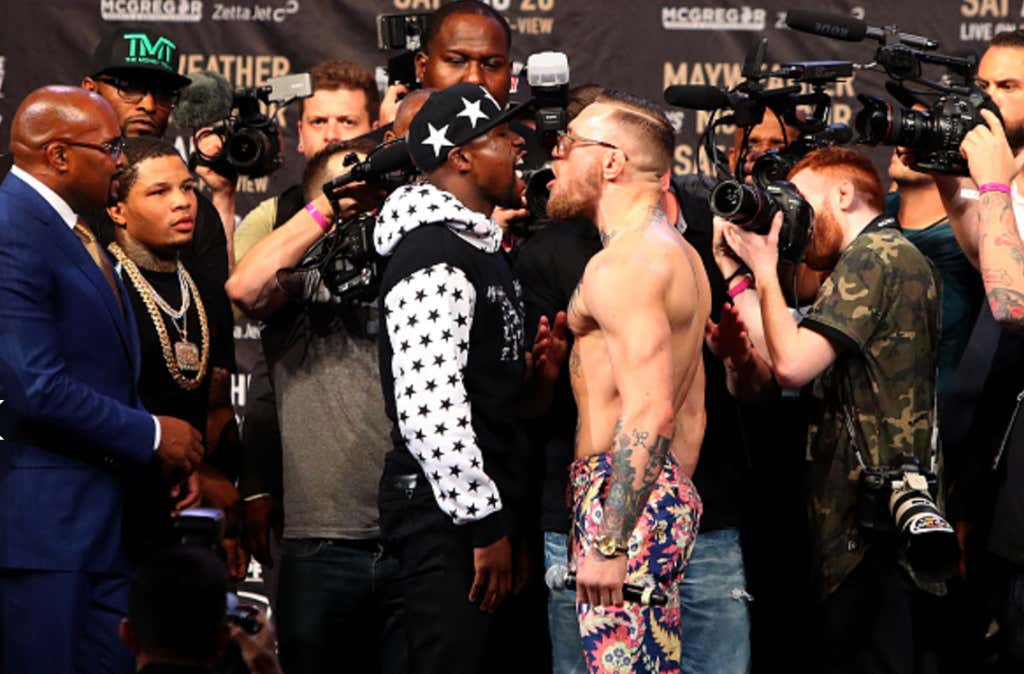 I’m sitting in the media room backstage at the Barclays Center a defeated man. There’s been a lot of speculation about when Robbie Fox is finally going to take an L. I took a ton of L’s tonight. Let me tell you about them.

When I got to the arena, I got out of my Uber and had a heart attack. Not a real one, but like, a Chaps one, because I didn’t have my wallet. You need your ID to get your credentials, typically, so I thought I was fooked. I texted a contact from Showtime who said I should be okay, so I hopped on line. A long line. A long line I waited in for a half hour only to realize I was in the wrong line. It was like 90 degrees and I was wearing a three piece suit. I don’t even want to talk about what was going on in my armpits and ass area.

I finally get inside, and there’s trouble getting my credentials because of the ID thing. Minimal trouble, but trouble. They let me in when I showed them my verified blue checkmark on Twitter, and I thought, “Alright, I just got into a massive press conference for the biggest fight in history because Twitter deems me famous. I’m gonna turn this day around.”

I did not turn the day around.

We (credentialed members of the press) were informed Conor and Floyd would be a little late, and all kinda laughed and rolled our eyes. Of course they would be. Stephen Espinosa, Dana White, and Leonard Ellerbe did pressers in the interview room. That took three hours. We went out to the arena when the god damn thing was supposed to start, and I was stunned at how awesome my seat was. Look at this shit.

Swizzzz Beatzz came out first, talked about New York and his beefs. The crowd booed him off the stage. Then Doug E Fresh started naming areas of New York. The crowd booed him off the stage. Everyone was clearly restless, because we waited around for THREE HOURS, but ready for this shit to start. What everyone wasn’t ready for was another 10 minutes of introductions once the two of them got up on the stage. BUT, through all of this, Conor McGregor showed up with more swagger than I’ve ever seen a human being have, and Floyd Mayweather showed up draped in an Irish flag. This presser would be AWESOME!

It was not awesome.

McGregor was up first, sang some Biggie, said “Fuck 50 Cent!”, gave Mayweather Jay Z’s new album, and explained that he was not, in fact, racist, because everything below his belly button was black and he humps black chicks. That’s all I heard, at least, because the audio in the arena was so bad it was all inaudible. Oh, and he tried to smack the hat off Floyd’s head (something I said he should’ve done 2 days ago) and failed. His bit was over in about five minutes, then Floyd did his “HARD WORK!”, followed by his “YEEEEEAAAAAAAHHHHHH”, followed by telling his team to surround McGregor’s team while he shadowboxed on the red carpet. There was some pushing and shoving, but no sparks flew. Mayweather threw a few hundred dollars at Conor, who pointed out he was making it rain in one dollar bills, and it was all over. I can’t say Floyd “won”, but he was most certainly a little better than Conor. I was so disappointed. I thought Conor McGregor was gonna beat Floyd 4-0 in these pressers and I could bring that up on August 26th after the fight.

Afterwards, McGregor did a Q&A with press, and I thought, “Here is my chance to turn this night around! I’ll get the microphone, and ask “Conor, I see you’re not wearing a shirt tonight. Care to put one on?” and hold up our 49 shamrock 1 shirt. Ya know, the one Dave told me he would give me a three thousand dollar bonus for if I got Conor holding it in a picture:

Why didn’t I just throw it on stage while I was 2 feet away from him? Oh I’m glad you asked. I was literally sitting one row in front of The Money Team. The ones who showed up, at least…

Five seats to my left sat the father of the girl Floyd is currently banging. The one he had on stage with him. He was screaming “DON’T YOU FUCK WITH MY BABY GIRL. I’LL FUCKING HAVE YOU SHOT WHITEBOY!” I swear to anything this is what happened. That’s a direct quote. So I was not throwing a “49 SHAMROCK 1″ shirt at anyone with that motherfucker five feet to my left.

They never gave me the mic at the presser, and I almost just threw the shirt at him. Issue was, I was in the back of the room and figured it’d be a George W Bush shoe incident if I did, so I didn’t.

Are there typos in this blog? Probably. I don’t care. I’m rattled.

The one positive of the night was hearing Dana White introduce Conor McGregor live and in person. I could feel the heat coming off his bald head.

It’s not really that much of a big deal. We’ll brush it off and we’ll come back. Defeat is the secret ingredient to success. -Conor McGregor -Robbie Fox

Conor will be back to his usual self in London tomorrow, and we’ll be gucci. Mark my fookin’ words, and buy a moderfookin’ shirt!!!

P.S. On a serious note, I cannot deny how massive everything felt today. The fans, the staredowns, the way everyone backstage was talking about the fight. This may be the sporting spectacle of our lifetime. It’s something so huge and so over the top that it’s right out of a movie.