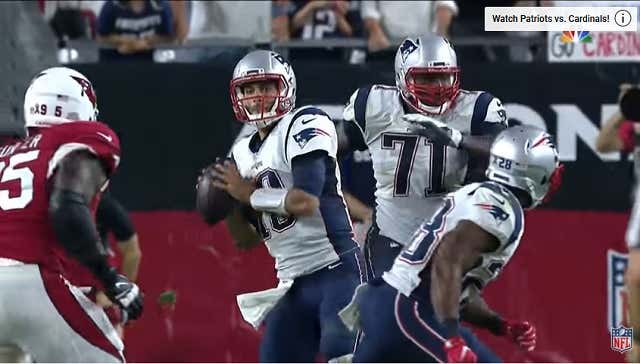 “I think the biggest reason was losing the opener on Sunday Night Football to the Patriots on that missed field goal,” Arians said. “That took a lot of swagger out of our football team, then we came back and lost to the Rams in another close game. We didn’t win the close games we had won in the past but it all goes back to that first one.”

You might call any coach who blames an entire season on a Week 1 loss a loser. And I literally cannot hear the word “swagger” without being reminded of the time in 2002 (the worst season of the Brady era at 9-7) when a Patriots player was quoted as saying “We’re getting our swagger back” and Belichick called the whole team out with perhaps his greatest quote of all time. “You know what? We didn’t have a ‘swagger’ last year,” he said. “If you fucking think about it, we didn’t have a swagger. What we had was a sense of urgency, a sense of urgency about playing well, being smart, and capitalizing on every opportunity and situation that came our way .  It wasn’t about a fucking swagger. You can take that swagger and shove it up your ass, okay?”

But I have no issue with Bruce Arians admitting that losing a home game on national TV, one where the commissioner of the league did him the biggest solid in football history by forcing the best quarterback ever to play to watch the game from his eco-friendly sofa at home for no reason, broke his team’s will. None at all. The Cardinals were supposed to be sky high for this one. I don’t remember the line but it wouldn’t surprise me to know the Pats were the biggest underdogs they’ve been in a meaningful same since the Matt Cassel season. Chandler Jones was supposed to be sky high. (On revenge and adrenaline, not synthetic marijuana.) Jimmy Garoppolo was making his first start since Eastern Illinois.All the planets were aligned in a Harmonic Convergence of victory for Arizona. But talent, coaching and grit won the day as it has so many times in the past. Jimmy G abused one of the NFL’s supposedly top defenses so bad that the video of it had to be taken down for violating YouTube’s Terms & Conditions.

So sure, there’s no shame in admitting that the Patriots damaged the Cardinals in a way that kept them damaged. It’s happened to better franchises than Arians’. Unlike most other coaches, he’s just willing to state the obvious instead of lying to his public. And I’m not ruling out the possibility they’ll recover this season. But if Brady played that Sunday Nighter, they’d still be dead. He kills your swagger for two years, minimum.