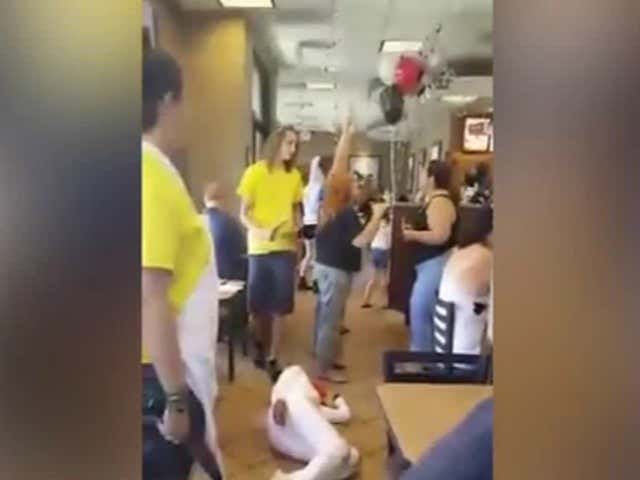 PINELLAS PARK, Fla. – A group of parents in Florida are upset about what their children had to see Tuesday while enjoying what was meant to be a quiet lunch at a Chick-fil-A.

Tina Leacock says she was with a group of kids and other parents when they watched a group of people dressed as chickens and cows come into the restaurant location in Pinellas Park, Fla. One of the persons was armed with a fake knife.

She says that person pretended to slash those animals throats as they fell to the ground, pretending to be dead.

Leacock and other parents recorded the encounter on cellphone video, as parents urged them to leave, telling them kids were present.

This should go without saying but we should honestly be past the point as a society where this is the quality of video that we get. Donnie takes videos with his damn glasses and gets 720p. These folks using poor people phones have gotta stop.

Anyway, Chick-Fila-A is the last place on Earth that should be protested for being inhumane. The nicest people on the planet work there. Everything is their pleasure. The workers don’t deserve a bloody protest, but honestly, these protesters are lucky they didn’t get their asses kicked to next Thursday by the stay at home parents. Chick-Fil-A is a fucking hub for stay at home parents. Parents try to go in there, order some nuggies with Polynesian sauce for their kids, and let them run absolutely hog wild for about an hour in the play places. Chick-Fil-A play places are basically the Royal Rumble. Little kids running in those mother fuckers like

The last thing these parents need on their third 32oz Dr Pepper is dealing with a protester slicing the throat of some teenager dressed like a cow because they are ultra woke while living in Pinellas Park, Florida.

Just make your moral meat stances somewhere that isn’t Chick-Fil-A. That isn’t too much to ask.