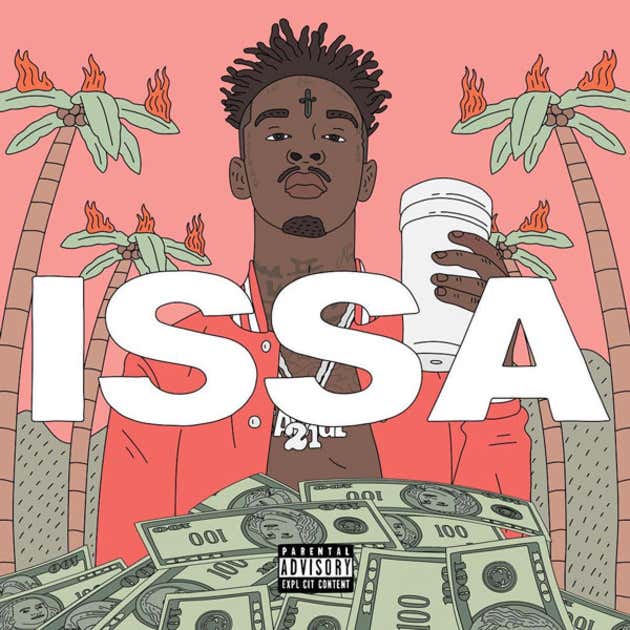 When you write the script for the masterpiece that is “Superbad,” you have earned permanent credibility for anything you ever say for the rest of your life. So when Seth Rogen tweeted his approval of 21 Savage’s new release “Issa” to the tune of 36K retweets, it’s worth us taking a look.

Now Rogen is likely one of very few in his demographic who feels this way. 21’s lyrics aren’t relatable to, well, pretty much anybody. If you are unfamiliar with the image he has created for himself, here is a quick rundown, from his perspective:

Now you can’t build a large fan base only by catering to an audience that understands this lifestyle. But 21 has this fan base, at 1M Twitter followers and counting. So how does he do this? First of all, his lyrics are typically moderately clever, and occasionally so absurd that they are downright funny- for example, “I be Gucci’d down, you wearin Lacoste and shit” or “Eating chicken curry in this bitch, woah.” But second of all, and arguably more importantly, he assembled the best of the best to serve as the producers for “Issa Album,” as he previewed in a tweet days before the album’s release. (Note: 21, likely in a drug-induced haze, forgot to mention Zaytoven in this tweet, who co-produced the two best beats on the album, “Famous” and “Nothin New,” with Metro.

I won’t go into details on any of these producers individually. I just want to address the common refrain of rap haters everywhere that the rappers themselves don’t sell, the beats do. My point is this: Why is this so inherently bad?

Their argument is that these rappers come to fame with little talent. But it’s ridiculous to use this to discredit the genre as a whole, because the producers undoubtedly make up for it. It’s not easy to play melodies and drumlines from the thousands of options in the digital instrument banks these guys use to make songs that truly bump. So when you team these producers up with a rapper whose image is popular at a given point in time, hits are made. 21 Savage may not be 2017’s Beethoven, but 21 Savage and Zaytoven together can be 2017’s Beethoven, at least in the eyes of the 2.2M people who have already listened to “Famous” on Spotify in five day’s time. And that’s before you take into account Apple Music and other platforms.

21 himself had this request of those who disapprove of “Issa Album”:

I have no such requests, other than to sit back and watch as Metro Boomin, Zaytoven, Murda Beatz and others continue to become household names.