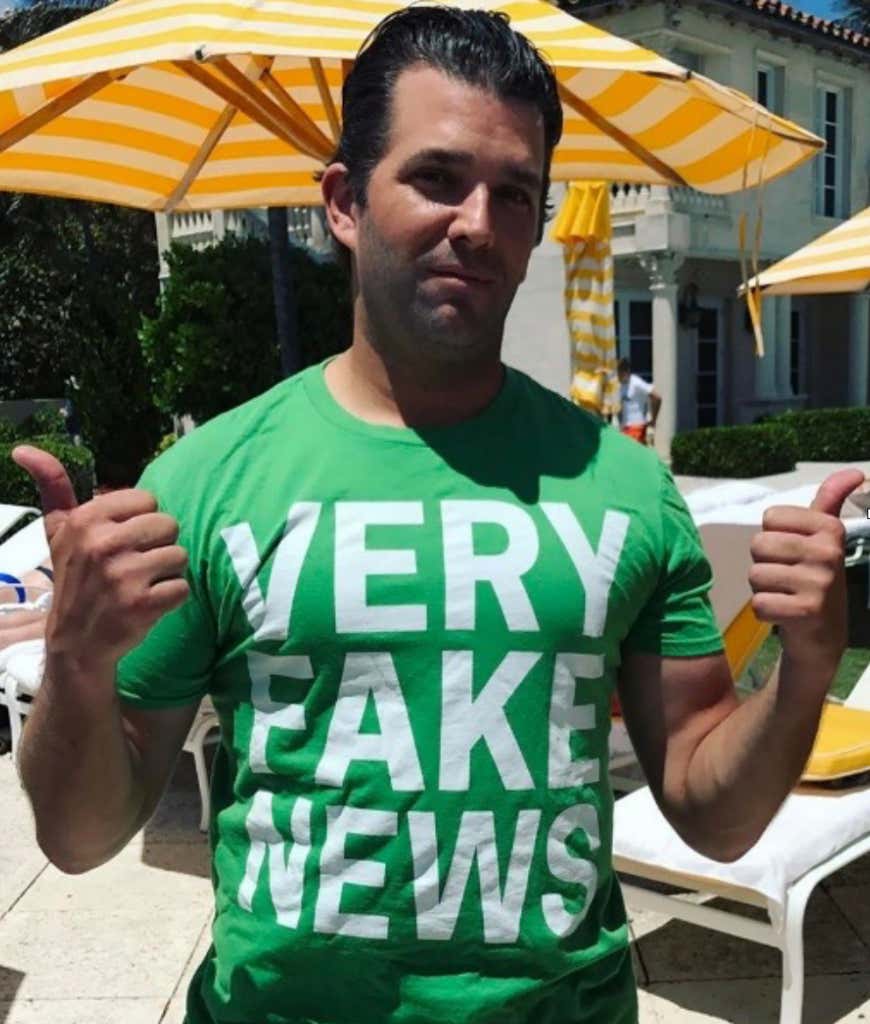 The fake news media is back on their bullshit, attempting to generate another scandal designed to take down the Trump administration. This time their target is Trump’s own son, Donald Jr. (He’s the one who looks like he could have been a tennis pro at the Malibu Sands who tries to steal Stacey Carosi from Zack, but then it turns out he’s actually addicted to cocaine, so Zack gets to keep the girl and we all learn a valuable lesson about the dangers of drug use), who they are alleging met with a Russian lawyer who promised to provide him with damaging information about the Clinton campaign.

Eric Bolling of Fox News has correctly identified the story as less than a nothing burger, calling it a “nothing Caesar salad,” which has the two-sided benefit of helping to down play the scandal and also making it way less likely that the story will pique Chris Christie’s interest and have him offer to help out. But not only is this scandal less than nothing — full disclosure I’m not too sure about the details of the scandal because I’ve vowed to only read up to three Trump-Russia stories a week and already maxed out on three 5,000 word investigatory pieces about the pee tapes — it also violates one of the cardinal rules of politics: Keep the children out of it.

Journalists have generally abided by the informal rule that as long as children in the President’s family don’t do anything completely crazy, the media will avoid reporting on them. If their behavior is totally beyond norms, they’re fair game for criticism and will likely get assigned Sinbad to watch over them. When it comes to Democratic politicians, the media follows this rule with complete fanaticism. Not a single negative piece was written about Sasha and Malia during Obama’s presidency, and during the 2016 campaign not one journalist could grow the balls to ask Charlotte Clinton a single tough question.

However, these same reporters who swooned over Sasha and Malia are now part of a concerted effort to take down Donald Trump Jr. Could it be that these so-called “journalists” finally realized that Donald Jr. and Eric are far more successful businessmen and have created significantly more jobs than the Obama golden children? The only job Malia Obama has ever created is that of a drug dealer when she smoked a marijuana cigarette at Lollapalooza. Tell me again who our kids should be looking up to?

Liberal journalists have continuously attempted to paint Donald Jr., along with Eric, Ivanka, and Ivanka’s husband Jared, as political figures instead of children of the President. Apparently just because you give one convention speech and a couple dozen interviews on behalf of the campaign and pick up 1-15 legislative portfolios as a small favor to your dad you’re no longer his child. This is clearly just another example of the liberal media attempting to further destroy the bonds of the American nuclear family.

Those in the fake news media would love for you to believe that Donald Jr. and the rest of the Trump campaign have been engaged in criminal or unethical acts with officials in the Russian government. But don’t let their Ivy League degrees and big words fool you, allegations of collusion are not so much evidence of any wrong-doing as they are an attempt by journalists to show you how well they did on the verbal section of the SATs. We get it, you think Don Jr. is an obstinate surrogate anonymously and surreptitiously soliciting illumination from an adversary, well guess what, that headline sucks for SEO so no wonder you’re all going out of business.