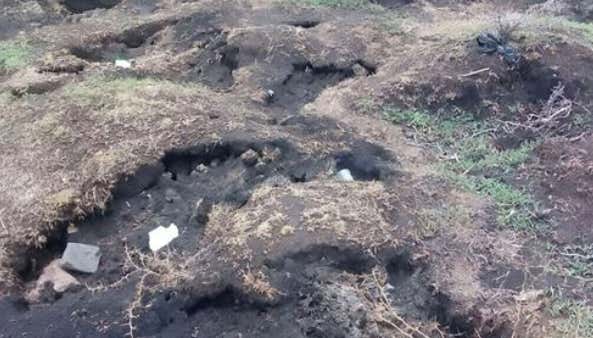 Source -  A football team has raised the alarm fearing a new volcano has emerged in the middle of their pitch. Players noticed smoke emerging from cracks in the ground on the playing field in a small town. It is also used for grazing goats, and a number of the animals have been burnt, from the steam escaping through the grass.

Residents have been told that they are not in danger but soldiers have been deployed to the field to seal it off. The State Civil Protection coordinator, Pedro Carlos Mandujano, said: “We can not say that this is the birth of a volcano at the moment.”

There are believed to be 3,000 volcanoes located in Mexico but only a dozen or so of them are considered active.

Stories involving Mexico, fields and unearthing usually have a grizzly ending, so this is a nice change of pace. Granted that could change if the Pueblo Viejo Football team keeps playing footie on the pitch, but for now we’re safe.

I’m a little confused as to why the Mexican government is so hung up on the classification of this thing. Doesn’t matter what it is, put a fence around it and move on. Don’t send soldiers to guard it. What are they going to do, shoot the lava if it starts acting up? How about serve an evacuation notice and create a barrier before you get Pompeii’d to death.

I’m sure volcanoes are a walk in the park for people of Michoacan. They’re probably just upset they don’t have a soccer field to play on. Actually, I wouldn’t be shocked if they did play on it. It’s probably fun, like a real life game of “don’t touch the ground.” Except instead of the living room floor being lava the lava is lava. And instead of your friends yelling “you’re out!” they yell “you’re dead!” Even the goats are casual about their impending death. They’ve been getting burned for months and still go back every day. You’d think their animal instincts would send them to higher ground. Nope. Not in Mexico.

Stories like these put things in perspective. I get upset when I step in a puddle on the way to work. These guys literally have the earth crumbling beneath them and couldn’t be happier.