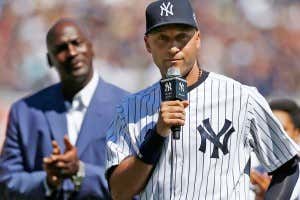 NY Post- Derek Jeter’s group has bid $1.2 billion for the Miami Marlins and appeared on Monday night to be closing in on a deal, The Post has learned.

While the situation was extremely fluid, Jeter’s group, which includes deep-pocketed Naples, Fla., money manager Bruce Sherman, is now seen as the leading contender to buy the money-losing franchise from New York art dealer Jeffrey Loria, sources close to the talks said. No sales agreement has yet been presented to MLB for approval, a source said.

Interestingly, NBA great Michael Jordan is among a group of about 15 investors in the Jeter camp, sources said — although the ex-hoopster is said to be kicking in very little cash. Jeter sees Jordan as a role model in how to become a successful sports executive, a source who knows Jeter said.

The Marlins are not expected to name a winner of the auction by Tuesday’s All-Star Game in Miami, sources said. MLB Commissioner Rob Manfred had wanted a winner chosen before the game — but the process is now expected to wrap up next week, a source said.

This could be the biggest week in Miami sports history. The legend of Aaron Judge grew in Miami, the All-Star Game will be played there tonight, and now they may have a real owner. There are only 3 groups left in the bidding but Derek Jeter appears to be in the lead and has recruited Michael Jordan.

I’ve said it a billion times before, but Derek Jeter will be a great owner. Yes he cares about making money, but unlike Loria he will want to make money by winning games. Now with Jordan in the mix, you have 2 of the greatest winners of all time working together not just on running the team, but building an atmosphere.

Jordan won’t likely be involved at all in the day to day of the organization. A few times a year, he’ll pop up in the owner’s box, maybe throw out a first pitch, but he won’t be helping figure out who to promote when a guy get injured. His greatest contribution will be business advising for Jeter and recruiting free agents. This is really the only part that concerns me from a Yankee fan standpoint.

Now I just want to know when the Marlins will retire Jordan’s jersey like the Heat.