What if I told you a young boy from Missouri took a stand against this:

And in doing so, earned himself this:

It happened like this. Last week, Trent and I voiced our opinion that running people over with golf carts is a fucked up trend that we do not like. That we do not support. That we do not want to encourage by posting on the Fore Play accounts. Monday morning, Dave called us into his office to discuss this. He said they do great numbers, gain followers, garner a ton of interactions, and take place on golf courses; therefore, the Barstool golf accounts should post them.

We countered that we do not want to encourage or support this trend and therefore do not want to post them. We argued that golf, to us, is about having a nice, relaxing time outside with your boys. It is not about getting run over and possibly facing serious bodily harm so that people can get on Barstool or Fore Play or other similar accounts.

Beyond that, we argued that being the guys that post these videos will hurt our brand. While we quite obviously represent a more casual, relaxed, fun golf crowd, we do not stand for this brutal, vicious, fucked up trend. Running over people with golf carts sucks. It’s simple — if someone did this to you, you’d be absolutely FURIOUS. As you should be. Chaps gets it. 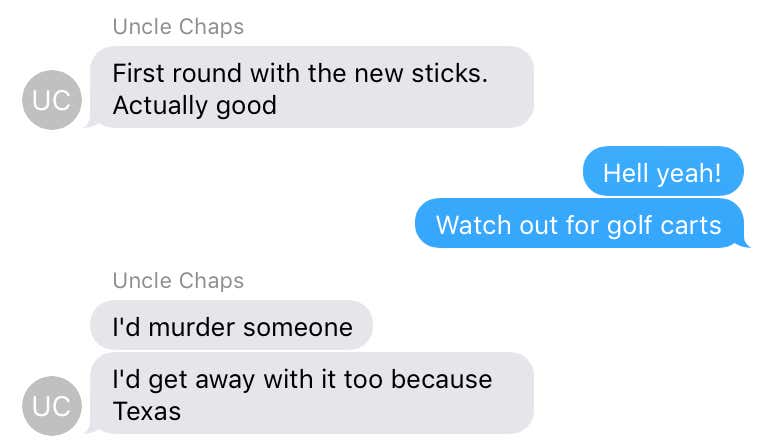 We’ve had David Feherty in the office. We have Padraig Harrington on the show this week. We had Brandel Chamblee in the office today. We do not want to alienate these types of guests and connections in the golf world by inevitably being painted as the guys who promoted the golf cart trend that ended up killing or dismembering some dude who was simply out golfing on a Saturday.

Fuck that. That cocktail of negativity is not worth the few thousand followers or likes or comments we’ll get. And those followers are not likely to be the type digging deep into golf podcasts.

We were pulled onto Barstool Radio to continue this discussion — of course, as soon as Dave laid out his point and it was our turn to respond, the radio cut out. Classic Barstool.

Dave ultimately said we have to post them, but we can caption them however we’d like, and we left. After back at my desk, I saw this retweeted by the Radio account:

Now, I’m not one to let myself get run over without a fight. I like to get out ahead of things. This RT comes off as a threat, as an endorsement of me getting run over, so I whipped up a fantastic idea. A hilarious idea — with the help of Young Pageviews, I buzzed downstairs, grabbed Big Cat’s scooter, and setup shop outside the radio studio. Whenever Dave came out holding his absurdly large laptop, I was going to rush him with the scooter.

Good, clean fun. Potential all-time funny Stool Scenes moment. Besides, how much damage could a scooter do? They’re sidewalk and indoor friendly for a reason. Instead, YP ratted me out, told Frankie Borrelli, who told Dave, and the whole plot was foiled; the only thing we have to show for it is the bounty on my head.

And now I’m out on the course dodging hooligans like this:

The worst part? This bounty from Dave was coming no matter what. Everybody knows that. Overall it was a solid day: we got to voice our opinion, Dave got to voice his, and we carried on our operation. Truly, the only thing we lost was a video of Dave getting run over by a scooter. That is a travesty some of us may never recover from. 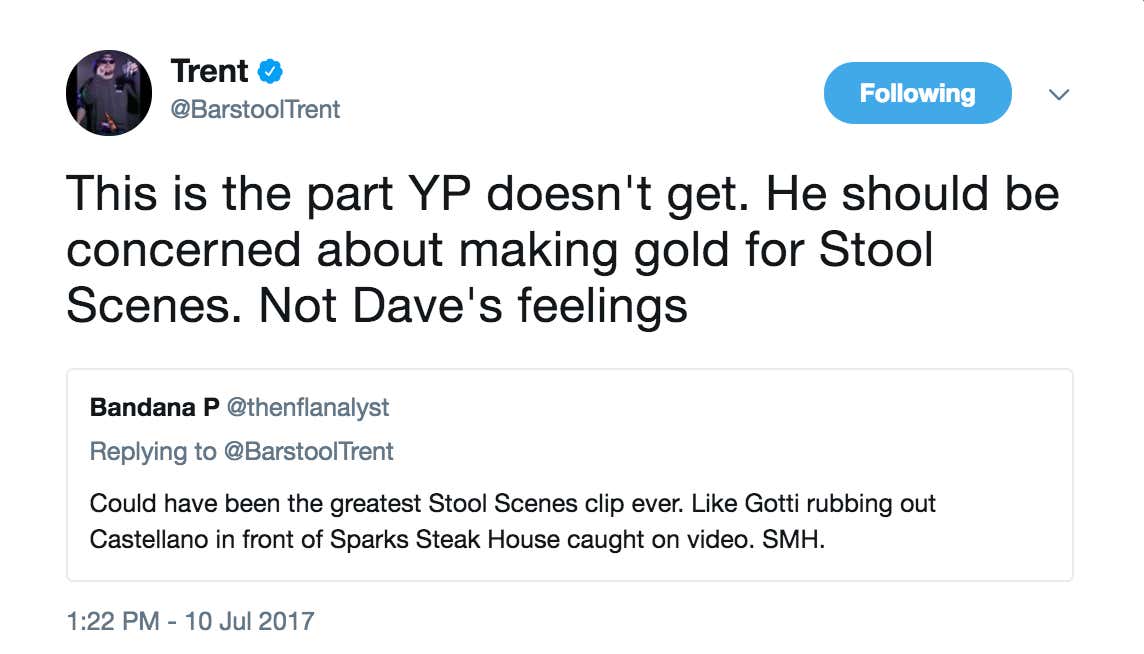 When Feits took his headphones off and found out about all this several hours later, he almost cried when he learned what YP had done.

YP did not return request for comment on this story.