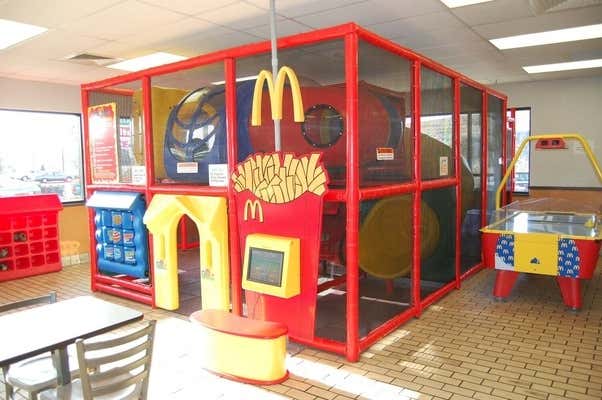 WXTV- A New Hampshire woman is demanding an apology and is raising questions about the cleanliness of a Manchester McDonald’s after her son became covered in human waste in the play pen. Justina Whitmore said that when she let her son play, she knew he may be covered in germs. “Germs yes, poop no,” she said. She said she never imagined her 5-year-old would emerge from the yellow slide covered in another child’s waste.

“I was still eating and the next thing I knew he came out and just stated there was poop all inside the slide,” she said. “When he came out, he was covered in poop.” Gabriel said he was playing tag with another child, who apparently had a soiled diaper. “It was because he went down the slide first,” he said. “And then I couldn’t help it and it went all over me.”

But it’s what happened after the incident that the mother finds even more outrageous. There was no soap in the bathroom, and when she asked employees for help she said they just laughed at her. “I went over to the counter and said, ‘Are you going to give me any paper towels or anything to help clean my son off,’ and they were just laughing and arguing about who should clean it up.” For 10 minutes Justina said she was pleading for assistance only to have employees ignore her and take smoke breaks, or act like a child. “I was at that point just using my bare hands and fortunate one of his socks did not have poop on it so I was just using his left sock to scrape it off his skin,” Whitmore said.

Can someone tell Justina Whitmore to grow up and get with the fucking times here? If you willfully let your kid go into a McDonald’s playground, you shouldn’t be surprised by anything they walk out with. Shit, piss, a human head. It’s all on the table. People don’t go Mickey D’s for pristine conditions or gourmet food. They are going because it’s cheap, tasty food that will shut their kids the hell up because everyone loves fried food and a free toy. If those people are lucky enough to be at a McDonald’s that has a playpen, they can then toss their kids into a Petri dish for a while so the kids can burn off some of that endless energy they have before hopefully by the grace of God falling asleep on the ride home.

If your kid walks away with some germs, the flu, or Hepatitis A-Z, you have to acknowledge that’s just the price of letting your kid tumble around at the playground of a place that sells food for $1. Germs are a pre-requisite when your kids play at a McDonald’s playground. You are basically signing an unwritten contract waiving your right to complain that your kids are going to be covered with all types of shit (literally or figuratively) once you let them go into a sweaty room that stinks of B.O. + fried food. If you don’t want your kid walking away covered in shit, don’t leave them alone in a McDonald’s playground. If you don’t want your kid covered in piss, don’t take them to a water park. Parenting 101 right there.

And if you want someone to care about your problems and be empathetic as you yell at them, the cashier making next to minimum wage at a McDonald’s is NOT the person you want to badger. That’s Life 101 right there.