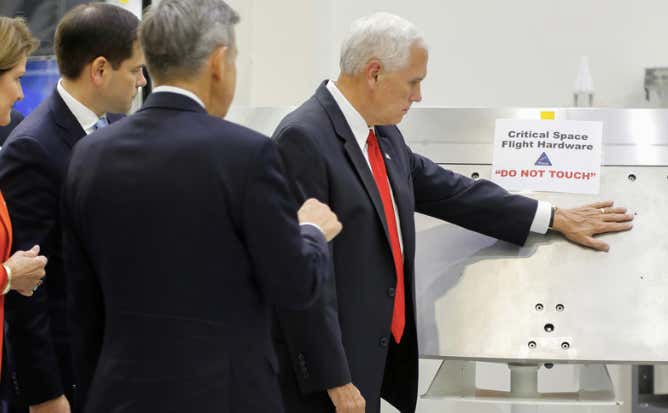 Source - Mike Pence set social media abuzz with a photo of him touching a piece of NASA space equipment clearly marked “do not touch.” On Friday, the vice president jokingly blamed Florida Sen. Marco Rubio for it.

During his tour of the facility, Pence laid a hand on part of the Orion spacecraft. Rubio, for his part, played along with the accusatory tweet, quipping that he warned Pence “you break it, you own it.”

According to NASA, there was no harm done. “It was okay to touch the surface,” the agency tweeted. “We were going to clean it anyway.” They added that “it was an honor to host” Pence.

There is a negative one million percent chance he tweeted that as a joke. No way. We all know Little Marco dared him. Which is fine, it was a good dare. Touching the thing that says “do not touch” is a classic. It’s just funny because he probably thought he was going to get in trouble, maybe do some damage control, a little splainin. Nope. People thought it was a joke so he’s going with that. It’s the oldest trick in the book; say something stupid, play it off like you were kidding. I don’t know why more people don’t do it. Props to Rubio for doubling down too. “Oh yeah, ha-ha, you break it you buy it!” He’s a good friend.

That being said, I’d like to know what the “truth side” of the dare was. Must have been good if he chose  touching the space ship surrounded by cameras. “Truth; have you ever downloaded Grindr:” “Uh, I’ll go with dare.”

Initially I thought I hated Mike Pence, for obvious reasons. But to tell you the truth he’s growing on me. He’s relatable; everyone’s done something dumb because of a dare. Granted, most people stop playing truth or dare after middle school but that’s not the point. Mike Pence has a George Bush-esq way about him; dumb yet charming. So for now, I’m going to overlook his bible spitting speeches and awkward dance moves and give him a pass. Something about a good dare that gets me going.