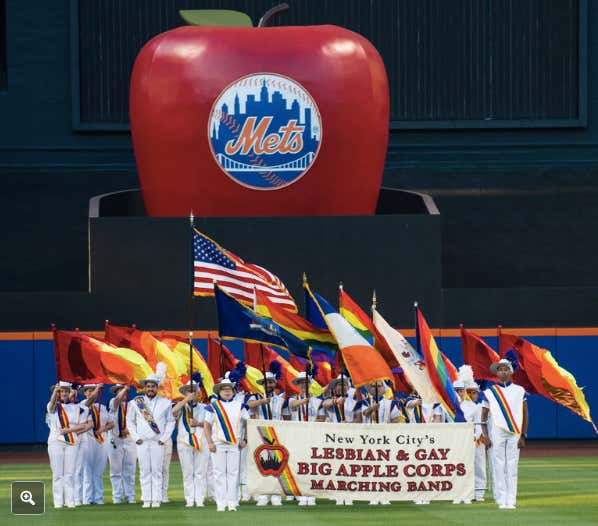 NY Times – On a recent Saturday night at Citi Field, the Mets rolled out the red (and orange, yellow, green, blue and violet) carpet for the gay community. The Coca-Cola sign in the outfield was lit up in rainbow colors. The Kiss Cam was filled with same-sex couples smooching. The color guard carried a rainbow flag. And gay officers from the New York and Nassau County Police Departments were honored, as was a gay war veteran.

And many sports teams, including a large majority in baseball, have hosted gay-themed events. But one team that has not done so is the Yankees, even though their city helped give birth to the modern gay rights movement. And while the Yankees have chosen to refrain from holding a gay pride event at Yankee Stadium, a team spokesman, Jason Zillo, said there had been involvement behind the scenes.

The Cubs are believed to be the first team to have had such an event, in 2001, and by the end of this season, only three teams besides the Yankees — the Los Angeles Angels, the Cincinnati Reds and the Milwaukee Brewers — will apparently not have had on.

Bean was surprised to learn that the Yankees had never had such an event, “the Mets have been the underdog and the Yankees have been the elite,’’ he said. “In that way it doesn’t surprise me. You’d think the Mets would come out for those underdogs in society, but I think it’s time the Yankees stand up and do something for the L.G.B.T. fans and the Bronx.”

As if I needed another reason to hate those elitist pin-striped pricks. Are they required to have a pride night? No. Should they? Absolutely. And they’re foolish not to, especially considering they’re in New York-god-damn-City. Do you know how many gays live here? A lot. Like, I walk down the street and it’s split fifty-fifty, and that’s a conservative estimate. Which makes it all the more surprising they wouldn’t embrace the LGBT community. I feel like I’m beating a dead horse but I’ll say it again, D.I.N.K.. Double income no kids, idiots.

I get that they want to uphold their “clean cut conservative” image but pride night isn’t about changing your image. It’s about extending an olive branch. It’s about saying, “hey, we’re cool with samsies, let’s celebrate with a $14 Bud Light.” It’s a win-win for everyone involved. Ball parks make money and we feel good about ourselves. Not to mention we get to mix it up with our own kind, which is always a bonus. The team spokesperson tried to explain their reasoning:

“Team spokesman, Jason Zillo, said there had been involvement behind the scenes.“

Jason Zillo, you tone deaf neanderthal. May as well say, “they’re here we just keep them in the back.” What does involvement behind the scenes even mean? There’s an opportunity for a joke somewhere in that sentence but I’m moving on.

I just find it bizarre that of all the cities, of all the teams, the New York Yankees are the last ones holding out.

PS: Shout out to the Mets for being a ride or die LGBT ally. If there’s some way we can credit it to their record I’m all for it. They could use a W.