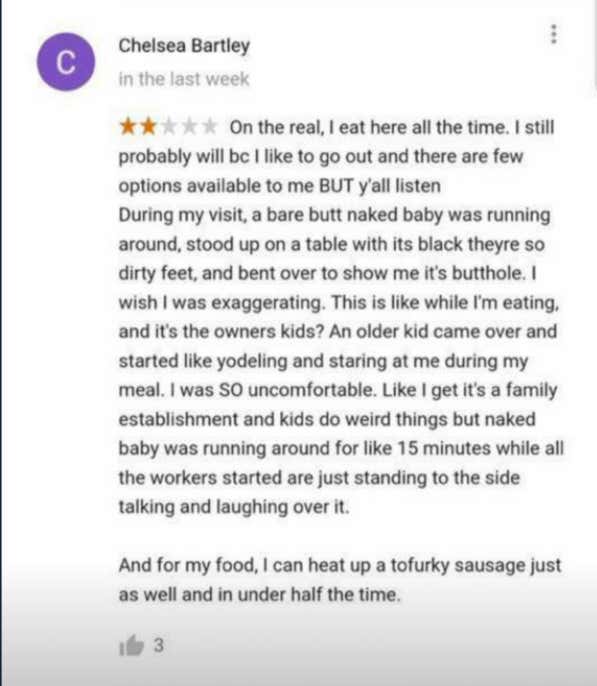 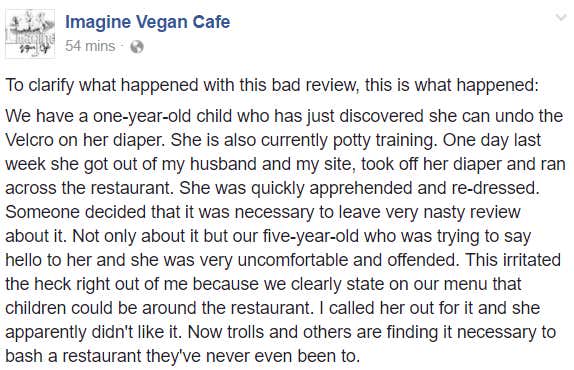 Two pillars of parenting that we often talk about on The Podfathers are:

1. Don’t let other people nitpick every little thing you do as a parent
2. Don’t be a shitty parent that allows your kid to act like an asshole in public

Now this little story kind of puts us in a pickle since it causes the two rules to directly contrast each other. While Rule 1 tells me that these hippies should be allowed to let their little monsters run wild in their own restaurant, Rule 2 is clearly violated because showing your asshole to strangers that do not care to see your asshole is an asshole move, whether you are 1 day old or 100 years old (that sentence covers a WIDE range of assholes). You know the phrase “Opinions are like asshole, everybody has one”? Well lets update that to “Opinions are like assholes, everybody has one and you shouldn’t share yours with someone else unless they ask for it”.

Howevaaaaaaa, the one pillar in all of life that should never be ignored is that you have to expect absolutely anything when you enter a vegan restaurant. Those places are the Thunderdomes of the culinary world. A baby may show you it’s butthole, the person in front of you may not believe in showers, or the cashier could have a giant bone going through her nose. Anything and everything is on the table when you enter those places. And if you have the gaul to complain about anything, they may come for your neck by dropping hippie logic on you.

Or start calling out names like Kurupt (shout out to anyone who gets this reference and to myself for referencing Kurupt in a blog about vegans). 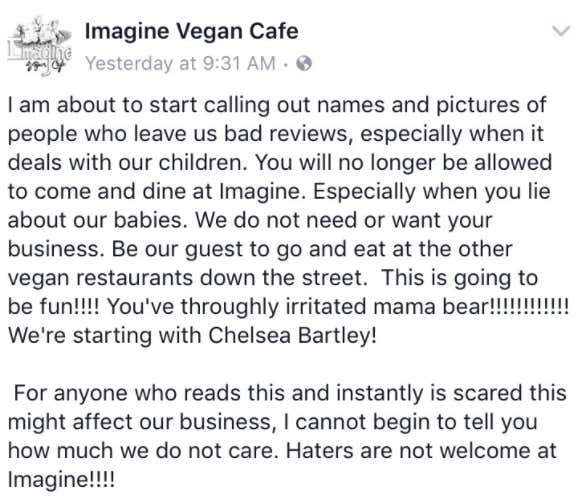 Oh shit, people can just institute a No Haters policy like that? Can we get one of those here at Barstool? Nothing but rainbows, compliments, and commenters singing kumbaya all day long? Get LAWST lady. Unless you have a “You may see my baby’s asshole or my other weirdo kid may yodel at you like a loony toon” sign on the window, people are well within their rights to leave a bad review. And if you put that sign on your restaurant’s window, you may attract the wrong kind of clientele (in addition to vegans, which are already wrong enough). I imagine Barstool’s traffic spiked on the dark web for a few days after Howitzergate, but those are not the kind of people you want visiting your website on a daily basis. Plus I’m pretty sure advertisers don’t give a damn about dark web pageviews.

Now since the Imagine Cafe has deleted its Facebook page, I’m pretty sure they may have realized the wrong of their ways. But I’d still avoid going there if you ever find yourself in Memphis for the Zach Randolph jersey retirement ceremony. Unless you are into baby buttholes, even though I imagine the Venn diagram for Zach Randolph fans, vegan food fans, and baby butthole fans doesn’t have much overlap.