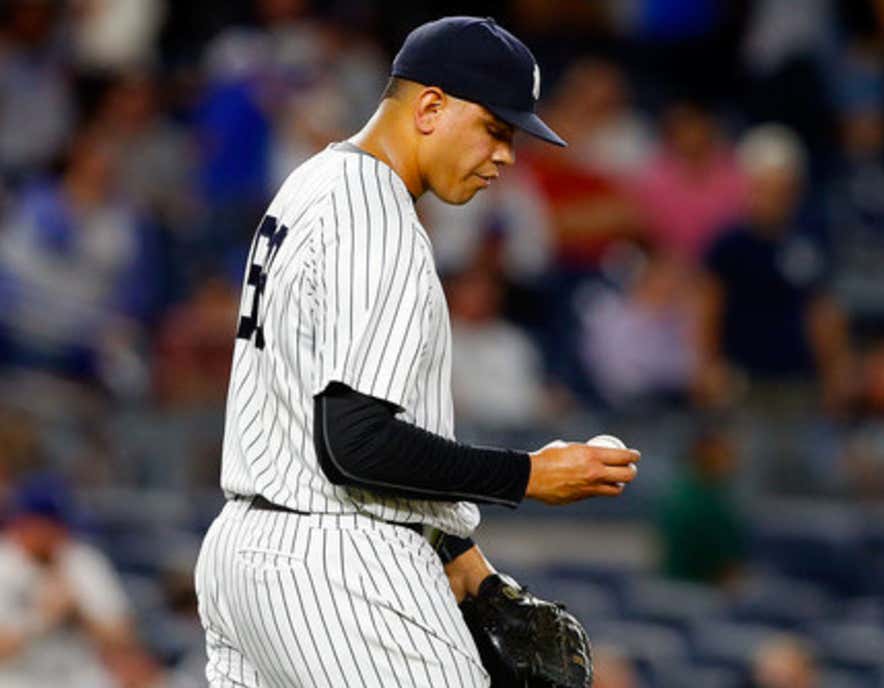 Dellin Betances is a lost man right now. There’s almost no answer for why he has lost the strike zone the way he has of late. He doesn’t trust one pitch in his arsenal to get over a for a strike and it’s alarming to say the least. From opening day through June 22nd Betances had given up ONE single earned run. During that stretch he was the most dominant relief pitcher in baseball without a doubt. Argue that fact and put up anyone’s numbers side by side, I bet you Betances’s numbers win every single time. While Chapman was sidelined with his inflamed shoulder, Betances took over as the closer of the Yankees and thrived. His confidence was soaring and caused me to write this blog praising the big guy for growing a pair and seizing the opportunity.

His last four appearances have been downright awful, and they’ve directly led to three losses

Yesterday’s 8th inning was simply hard to watch. He had no hope of finding the zone, loading the bases with three walks. At one point he threw ten straight balls. He came from behind to strikeout Bautista, leading to a sarcastic cheer from the sell out crowd. He managed to get a 2-2 count on Russell Martin before losing him and walking in the winning run. For a dominant pitcher like Betances to only get one out, give up a run, while walking four and giving up no hits is flat-out astonishing. Girardi was sort of at a loss for words after the game.

Over his last 2.2 IP, Betances has given up 7 earned runs on only two hits. So how’s that even remotely possible? Because he’s walked ten batters during that stretch. TEN. It’s Rick Ankie-esque type of stretch he’s on. An ERA that was 0.40 in late June has risen to 3.21 in a matter of a few weeks. Yesterday was brutal because the team fought so hard to climb out the 5-0 hole Michael Pineda dug us in. There was a ton of optimism that this was the turning point and we were going to win a series. This was the type of win we needed to get everyone’s spirits up. Nope, another blown lead by the pen led to another series loss, this time to the life-less Blue Jays. Absolutely gut-wrenching.

So what’s the next move? Is it putting Dellin in lower leveraged opportunities to get his mind right? Luckily Chad Green has stepped up big time to solve the 7th inning for now and Adam Warren has returned from the DL thank God. So does Joe give Warren the 8th for a little while until Dellin gets his shit together? That might have to be the move. I think most importantly Dellin needs to skip out on going to Miami for the All Star Game. This guy needs to take a mental break and get away from baseball for a few days. Just shut it down and hit the reset button. There are a lot of players that need to take a load off. Dellin might be the guy who needs it most. Take the week off big guy and get your mind right. There’s plenty of relievers out there that deserve to be in Miami next week. Give them the opportunity to go because there will be plenty more chances for Dellin down the road. This is a no brainer in my opinion.